Pigeon Blood (鳩血) or Shin Aso (麻生シン) is a doujin artist that focuses on drawing Touhou-related doujinshi, mostly about Meiling and Sakuya.

If you don’t know what Touhou is, click here.
Genre: Yuri, Romance, Fighting, Slice of Life, Comedy
Characters: 8/10
Sakuya Izayoi: Sakuya is the chief maid at the Scarlet Devil Mansion, working for her mistress Remilia Scarlet. She is one of the only humans living in the mansion and has the ability to manipulate time.
Hong Meiling: Meiling is the gatekeeper and gardener of the Scarlet Devil Mansion. She’s also a strong youkai and a master of Martial Arts.
Pigeon Blood doesn’t really change the characters, but rather adds in some extra character traits. For example, Meiling is head over heels in love with Sakuya but is still a little careful when it comes to showing her love. Sakuya on the other hand is a short-tempered tsundere, totally denying her feelings for Meiling only letting them slip during rare occasions.
Trust me, this combo doesn’t only provide us with some very sweet and lovely moments but also with some quite hilarious ones.
Works: 7/10

As I said, most of his doujinshi revolve around Meiling and Sakuya’s life in the Scarlet Devil Mansion. Sometimes other characters like Flandere, Remilia or Patchouli are involved as well, but the main focus is almost all of the time set on the interactions between Meiling and Sakuya.
Doujinshi about MeilingxSakuya (and others):

Loyal
No Title Story
Treat
Do you like sweet things?
Fortune Days
Escape
Kage zushushi
Existing with you
Partiality Issues of Scarlet Devil
Private Area
White Clover
Between Calmness and Passion
The Spring’s First
While most of Pigeon Blood’s doujinshi depict certain moments in the lives of the residents of the Scarlet Devil Mansion, the amount of romance and/or sexiness always turns out satisfactory.
So far Pigeon Blood has only released worksafe doujinshi, some of them with a few “dirtier” pictures but nothing really heavy. But with the newest doujin “Love or Lust”, Pigeon Blood does not only cross the line between SFW to NSFW but goes into full hentai mode, presenting us a REALLY dirty and explicit doujin. To be honest, I was quite shocked upon finding this specific doujin one day on danbooru.
So far his stories were rather cute and lovely, which is why I wasn’t expecting a doujin like this. Don’t get me wrong, I was actually waiting for a H-doujin by Pigoen Blood, but I was hoping for a more sweet and romantic one that would fit his previous works better… Well for everyone who is interested in it now that I’ve told you how terrified I was when first reading this, I’ll give you a link to the translated version of this on danbooru.
But be warned, this is really explicit, oh and Meiling is a futanari.
Love or Lust
Even though Pigeon Blood is mainly known for MeilingxSakuya, there are also 2 doujinshi about Mokou and Kaguya, both of which are worksafe.
Music Through Eternity
Sen no Yoru to take no Hana
Art: 9/10
So far I think I’ve never reviewed an artist who doesn’t come with an outstandingly great art style and Pigeon Blood doesn’t make an exception. Other than the three previous artists that I wrote reviews about, Pigeon Blood doesn’t really draw characters to look cute or childlike. In his case the characters look mature and all grown up (and busty), which is quite nice for a change. But then again, take a look at his work for yourself, I’m sure you’ll find his art as enjoyable as I do~

Almost all of Pigeon Blood’s doujinshi come with a certain amount of yuri. In most cases the relationship between Meiling and Sakuya is cute and hilarious, in some it’s romantic and in a few others it’s sexy. I think everyone will find at least one doujin completely to his/her own taste. And furthermore, the pairing MeilingxSakuya is pretty awesome to begin with.
Total Enjoyment: 9/10
Pigeon Blood is one of my favorite artists. He combines a great art style, great characters and entertaining and sometimes really cute stories. If you are interested in reading his works, I would recommend you to at least inform yourself a little about the characters. These doujinshi are way more enjoyable when you have some background information, but then again it is not necessarily needed to understand what’s going on.
Side Note:Most of Pigoen Blood’s doujinshi were translated by Gensokyo.org and Wings of Yuri but there are still quite a few untranslated.
Pigeon Blood’s Website and Pixiv 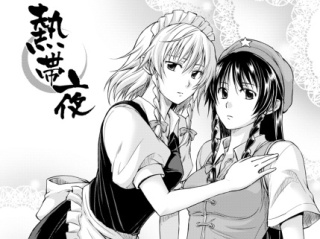