Author: Manta Aisora
Genre:Comedy, Action, Harem, Love Polygon, Aliens, Fantasy, Parody, Yuri, Yaoi
Plot: 5/10
Since the story is in inspired by H. P. Lovecraft’s Cthulhu mythos, it comes in handy to have at least a little background knowledge on that matter, but if you don’t know what this is all about, rest assured, this anime has little to no real plot to begin with, so who cares.
Nyarlathotep (in short Nyaruko), an alien from outta space is send to earth to protect a young boy from getting kidnapped by some evil creatures. Unfortunately, after finishing her mission, she ends up falling in love with him and decides to stay a little longer, to assure Mahiro’s safety.
And that’s it, everything that happens from the moment Nyaruko decides to stay at Mahiro’s place, is random, confusing and doesn’t really make any sense. But that’s exactly what this anime wants to look like and in fact the wackiness of this story is what made me watch this show in the first place.
The main theme that probably drives the whole anime is Mahiro’s harem. As the show goes by and more characters are introduced, his fanclub grows from one crazy member to at least 4 members and not all of them are female.
In short you could say, most of the all the characters act like shameless perverts, everyone is to a certain degree crazy and random turns in the plot keep on happening even though they make absolutely no sense. It’s pure entertainment and nothing more.
Characters: 7/10

Mahiro Yasaka: He’s a pretty average boy leading a normal life. Well, at least until some alien trafficker decides to make him their new target. But fortunately Nyaruko is send to earth to save him and thus starts to live at his house. While this show is full of crazy creeps and perverted molesters, Mahiro is just a normal guy and that’s exactly what makes him look so boring.
Nyarlahotep (Nyaruko): Sent by the Space Defense Agency, Nyaruko comes to earth, to protect Mahiro but ends up falling in love with him. And even though she is more than eager to show her love in various ways, her attempts at making Mahiro fall for her or more precisely to make him have a baby with her, stay fruitless.
Kuuko and Hasta: Just like Nyaruko, they are aliens that both end up living at Mahiro’s house as freeloaders. While Kuuko is madly in love with Nyaruko, Hasta on the other hand falls for Mahiro, joining his harme as the 3rd member.
In the beginning, there is only Mahiro and he’s, just like I said before, pretty normal. Then comes Nyaruko, adding a huge amount of craziness to the show. And with each new character that is introduced, things become weirder and weirder. I often found myself wondering if the story could get any more crazy and each and every time they surprised me yet again, showing me that there seemingly is no limit to how crazy and random this show can get.
Animation: 8/10
To make up for the nonexistent plot, the animation is pretty nice. But it looks like they put a lot more effort in designing and animating the female characters, than they did in designing the male ones. (Let’s include Hasta to the female characters since he’s more like a girl anyway) Mahiro and Youichi look really plain compared to Nyaruko and Kuuko, but that’s actually the case in many anime.
As always here’s a trailer or in this case a short preview:
http://youtube.googleapis.com/v/NIQ05TOiztM&source=uds
Sound and Music: 7/10
First things first, I LOVE Nyaruko’s voice. There is probably no one who would have been more fitting for this character than Kana Asumi. I swear her voice acting made this anime at least 10 times better and funnier than it already is. Other than that I can’t really understand why they chose Kitamura Eri to voice the male protagonist Mahiro. I know that a whole lot of male characters are voiced by females, but this mostly applies when the character is still young. So I can’t quite understand why they didn’t choose a male voice actor for him, since at least I think that his voice really sounded a little too female. But that’s just my opinion.
The background music went by unnoticed, same goes for ending theme. The opening on the other hand was really fitting for this anime and I loved the fact that the voice actresses sing the opening song themselves.
Yuri: 5/10
While the main couple (Mahiro x Nyaruko) will most likely never really become lovers, the same applies to the yuri pairing (Kuuko x Nyaruko) as well. It’s just what you would expect from a comedy anime like this: Kuuko makes countless approaches to Nyaruko, some of them in a cute way, but most of them in a rather creepy and unhealthy manner. And while all of them get crushed, she never gives up and her excessive love grows even more. 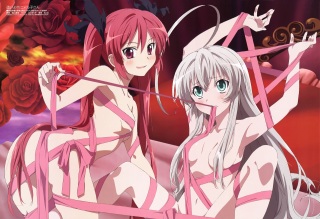 Total Enjoyment: 7/10
Personally I enjoyed this anime quite a lot. It’s neither an interesting nor an exciting one. But what this show is really good at, is making you laugh A LOT. But be warned, this humor is a rather stupid one, no clever jokes, there’s just some random and stupid stuff happening. And even though it might sound like this anime is crap, it isn’t, at least not for me because this show kept me entertained from the start and that’s quite rare. So in the end I think this is a must-watch for comedy fans only. If you are interested in Haiyore! Nyaruko-san, just watch the first episode and if you don’t like the first one, stop watching because this anime doesn’t change.