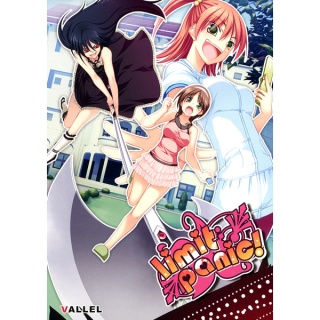 So many great news in such a short time! Just shortly after the announcement of the “Sengoku no Kuroyuri” translation, we have yet another school translation club deciding to take on the translation of another untranslated yuri Visual Novel, Limit Panic!
Title: Limit Panic!
Genre: Yuri, Comedy, Yandere
Developer: Vallel
Website: http://www.h6.dion.ne.jp/~vallel/limit/index.html
Release Date: 2010/08/28
Description:

Limit Panic is a non explicit Girls Love Visual Novel by Vallel.
The player takes on the role of a female protagonist, Mana, who is visiting a rich friend’s house for the summer.
However, there are a few problems: first of all, her little sister, Kurumi, comes along and she doesn’t get along with the rich friend, Kyouka; secondly, both Kurumi and Kyouka are batshit insane and more than willing to Murder the Hypotenuse. (http://tvtropes.org/pmwiki/pmwiki.php/VisualNovel/LimitPanic)

Project Team:
If you have questions or want to know the current translation status, follow/contact them on Twitter:
https://twitter.com/AkiraBishonen

I’ll have the same job as in the Sengoku no Kuroyuri project and do the announcement as well as keeping you guys up to date with some status updates every now and then.

Also we have some news regarding the Sengoku no Kuroyuri Visual Novel.
As I’ve been informed, there are some more members from another school joining the project group:
New Members:
Also they changed their team name into “FlashSpeed Translating Group”, which is pretty fitting since they’ve already translated about 20% of the whole Visual Novel in such a short amount of time.
And there’s even more great news.  When they are done translating Sengoku no Kuroyuri, they will most likely start working on Otome Crisis.
Finally, here are some pictures of Limit Panic~