Spoiler Warning!
Length: 2 episodes
Producer:Primastea
Genre:Yuri, Romance, Fantasy, Ecchi
Characters: 6/10
Kiiko Kawakawi:Kiiko has developed some strange telekinetic powers after an accident that happened some time ago. There is no more information on what kind of accident it was and how that made her adept these powers. I guess throughout that whole anime I kind of learned to just accept things without questioning them further…
Aaya Saitou: She’s one of the more popular girls in class who gets along with basically everyone. But what most people don’t know about, is the fact that she’s spending most of her afternoons with classmate Kiiko, helping her getting better at using her powers.
Story: 4/10
After a severe accident, Kiiko finds herself developing some strange telekinetic powers that only she and her friend Aaya know about. While Aaya is determined to learn more about that power, Kiiko uses their meetings after school just to spend some more time with her secret crush. Luckily she finds out that her feelings are mutual but the bliss of their togetherness doesn’t last too long.
That’s more or less what happens in the first episode and if you don’t wanna get spoiled too much that’s where you should probably stop reading.
So watching the first half of the first episode was pretty weird already but mostly cute. We get a brief introduction of the characters and they just spend some time together. The second part of this episode is where things start to get really weird. From the beginning this anime gave away an odd feeling but it reached its first climax of weirdness right at the end of episode one, where we find Aaya having sex with her brother and Kiiko witnessing the whole act. You could say, this single episode left some great impression on me already, not in a positive way though.
Throughout the almost 2 years we had to wait for the second episode I’ve had enough time to come up with some explanations for this last scene and I think it may be because I watch way too much anime, that I got the “logic” right and came up with just the right answer. So episode two reveals Kiiko’s motives behind her actions in a way that’s oddly understandable but still too illogical to believe. Ah well, it turns out her brother is ill and has to undergo an operation that might cost his life. And as a last wish, he wants to have sex with his sister. Sounds reasonable right?
And of course as a good sister, Aaya goes along with it. Whoever is thinking that this is weird already, be prepared, the “best” part has yet to happen.
It’s not like Aaya tries to apologize and clear things up in a normal way, no, she comes up with something much better. So after using a little trick to get Kiiko to come into some kind of storage room, she knocks her out, ties her up and locks the both of in. And as if this wouldn’t be creepy enough, she doesn’t use her forced alone time with Kiiko to talk about the problem at hand, she just rapes her…
In episode 2 things gradually get weirder the further we get into the episode. And even after Aaya releases Kiiko, crazy stuff keeps happening. Like Aaya keeps coming at Kiiko just to have sex with her.
Funny thing, this is not a hentai, even though the amount of sexual content is high. I really don’t know why this is only PG-13. I guess the amount of naked skin is kind of low but their sexual actions are still very clear.
So in the end Aaya leaves Japan, but before that Kiiko mysteriously finds out about what happened between Aaya and her brother. She uses her powers to teleport into the plane and after that both of them wrap away to another planet.
Happy End.
Yes, that makes sense….
I guess I used the word “weird” way too many times already but that’s probably the best way to describe this story, just very very weird.
Animation: 5/10
The animation is not that bad, but in my opinion definitely below average. I guess they didn’t really have that much money to produce this short series, which is why the characters look rather plain and not very high in detail.

Sound and Music: 6/10
From what I can judge, the voices are pretty fitting, especially Kiiko’s voice. The music on the other hand was rather forgettable. Don’t get me wrong, it’s not like I didn’t like the music, it’s just that it was boring.
Yuri: 8/10
All this short series is about is the relationship between Aaya and Kiiko, nothing more and nothing less. And while the anime starts out rather innocent, it gradually becomes dirtier, to the point where I would call this a borderline hentai even. I mean they have sex basically everywhere and these scenes, even though they are not very long or explicit, are making it pretty clear what’s going on. 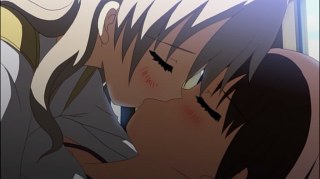 Total Enjoyment:3/10
As a yuri fan I was totally excited about this OVA. I mean I was already satisfied enough knowing that the characters look nice and that this was going to be a pure yuri title. But things turned out different than expected and my excitement quickly turned into confusion while watching the first episode. And when I finished watching the second one, I was not only confused but totally weirded out.
I’ve thought about this more than once, maybe this anime is a masterpiece and I’m just too stupid to really realize its true brilliance. But then again maybe this anime is really just as confusing and weird as I think it is.
So should you watch it? As a yuri fan, probably yes. This is only 2 episodes long, so you won’t waste that much time on it. And as I said before, this show will leave an impression on you. I just don’t know whether it will be a good or a bad one.