Hey there, nice to see you for another Top 10 list of mine.
This time I’m going to present to you my all time favorite yuri pairings from anime, manga, visual novels and other games. What was really hard about this was not to come up with the pairings, but to bring them into an order, but I think I’m quite happy with how it turned out.
Please note that my rating for almost all of the mentioned pairings is usually influenced and sometimes even completely based on some doujinshi about the characters and not the original ones from the anime or game they are from.
With that said, let’s continue with my list, enjoy~
10. Ymir x Christa (Shingeki no Kyojin)
Even though Shingeki no Kyojin is like the most popular anime right now, there surely are some people that either don’t know the show or simply don’t know this pairing yet. The anime didn’t really make things very clear between them, so it will take some time until we’ll see some more subtext or even actual yuri going on, but the time will surely come. The internet is already full of Ymir x Christa stuff, so in this case it’s absolutely the fault of all the nice fan art and doujinshi that I’m already absolutely in love with these two.
If you like this pairing, check out these artists: 午後パン, 空歩, leo19th

Even though Marisa can basically be paired up with anyone, I still love this pairing the most. In this case it’s mostly the fault of an artist called Ichinose, who drew some bittersweet and awesome doujinshi about these two. If you’re a fan of the pairing, definitely check out these doujinshi by clicking here.
If you’re in for more, check out these artists: Ichinose, Cloud Palette

And another Touhou pairing~
Actually this isn’t that surprising considering the fact that almost all important characters in these games are female…
Meiling and Sakuya share a very special kind of relationship with each other in most doujinshi they are paired up in. Sakuya is usually a tsundere that just can’t show her feelings properly and always ends up scolding her crush for the smallest things. And Meiling, well she’s happily going along with it, always hoping for some special moments to come by. And when they do, it’s SO satisfying.
If you like this pairing, check out these artists: Pigeon Blood, Ichinoseand Usacan

Shizuku and Eris are not just my favorite SonoHana couple, they’re actually my favorite couple of all visual novels I’ve ever played. Both of them are two of the most gorgeous yuri characters ever, they’re a great comedy duo and in general they’re just so cute together.
Furthermore Shizuku is probably one of the most adorable yet sexy tsundere characters ever and she surprisingly doesn’t even come with a loli body like most tsundere characters do. Eris on the other hand is very open with her feelings, maybe even a little too much, but it’s exactly this combination that leads to so many enjoyable and funny moments~ Oh and I should probably mention that Erisu is also a slightly dense and very perverted girl, which are of course some very promising character traits as well.
I absolutely can’t wait until the 10th SonoHana installment will be fully translated~ 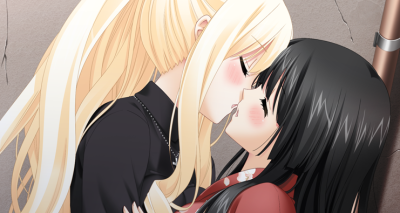 6. Nao x Reika (Smile Precure)
When I read the first few doujinshi about these two, I didn’t even know what kind of anime Precure was. And now that I know, it’s a little surprising just how many fantastic looking NaoReika doujinshi there are out there. I would even go so far as to say that it’s almost impossible to not have stumbled across NaoReika as a yuri fan. Since I’m in love with them so much, I already started watching the anime, which by the way was a bad idea and a waste of time since there is no yuri subtext really, so this is one of the pairings that solely reached such a high ranking because of the great artists that draw doujinshi about them.
If you want to see some of them, check these out: Mura Mura Pocky, Waterfall, Niratama, Sweet Pea

When it comes to Natsuki and Shizuru, my love for them partly originates in the anime and partly in all the great fanfictions. This is probably the yuri couple with the biggest amount of fanfiction available. On fanfiction.net alone there are almost 4000 stories about them (number growing) and I can definitely understand why people would want to write about Shiznat. I mean a badass tsundere and a sexy stalker? How promising does that sound?
Ah well anyway, there is a reason why these two have such a huge fanbase, so if you don’t know them already, why not check them out now?
Here are some nice artists: Nanazaki Iku, Waterfall 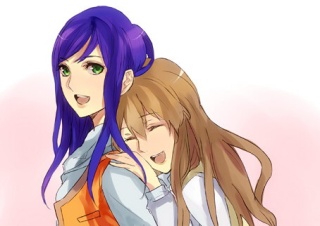 Speaking of famous yuri anime couples, Chikane and Himeko are probably one of the most famous if not the most famous yuri couple in anime ever, which is absolutely no surprise. Just look how gorgeous they are and how well they fit each other. It’s almost a crime that there is no second season of Kannazuki no Miko and unfortunately there aren’t even many doujinshi about them.
But still we have at least something similar to a  second season and even though I didn’t really like “Kyoshiro to Towa no Sora“, it was definitely worth watching if only for some more Himeko x Chikane Himiko x Kaon goodness.

3. Madoka x Homura (Mahou Shoujo Madoka Magica)
Are you surprised that I didn’t choose Kyouko x Sayaka? I was considering putting them in the list as well, so let’s just say they’d be my number 11, but I think the relationship between Madoka and Homura is somehow more dramatic, more intense and also a little more enjoyable for me to watch. It’s also a huge plus that in doujinshi, Homura can be presented as either her cute and clumsy self or as her badass and sexy self. Either way I love it and Homura is definitely one of my favorite yuri characters in the first place.
If you like this pairing too, check out these artists: 山田あ, Fukuya, Hitomaron (Setouchimasuko)
2. Nanoha x Fate (Mahou Shoujo Lyrical Nanoha/ A’s/ StrikerS)
Somehow NanoFate is really everywhere; We got a lot of nice yuri subtext in each of the 3 anime seasons, some yuri subtext in the original manga, a huge amount of fun/cute/sexy NanoFate doujinshi and a whole lot of really well written fanfictions. So what else can we ask for? Oh right, there’ll be a 3rdMahou Shoujo Lyrical Nanoha movie coming out soon, so I’m hoping to see at least some yuri moments in this movie as well~
If you like this pairing too, check out these artists: Tokoharu, Asterisk, Hachikai
1. Mokou x Keine (Touhou)
I think in this case it’s absolutely Vivit Gray’s fault, that these two characters are even mentioned in this list. You see, if it wasn’t for this artist, I wouldn’t even know about the greatness of MokouxKeine and that would be such a shame. But why are these two my number one?
I remember reading my first doujin about them some years ago and after finishing it,  I immediately started to search the internet for more. There is something special about Mokou and Keine that I just can’t get enough of. They match each other so perfectly, they’re just too cute together and their beautiful yet so tragic love story has managed to earn this couple the first place in my list.

If you don’t know these two yet, then here’s a music video that should explain their relationship pretty well. Music by RegaSound Art by Vivit Gray

http://www.youtube.com/watch?v=a0ghhvhNRp0
And if you like this pairing too, check out these artists: Vivit Gray, Rireba, 鼓膜住職

That’s my list and I’m pretty sure other people have completely different favorite pairings than I do, so feel free to leave your favorites as well, I’m always happy to read other peoples’ opinions.