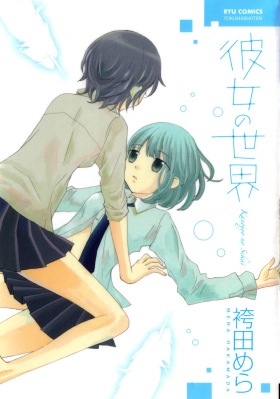 Author: Hakamada Mera
Length: 4 chapters
Scanlation Group: Fly by Yuri!
Genre: Yuri, Angst, School Setting, Blackmailing
Read Online
Story:
By accidentally bumping into each other, Natsuki and Hidari, two high school classmates, unnoticedly end up swapping their notebooks with each other. The two of them have never been friends, nor have they talked very often with each other, if at all. And while Hidari is a very quiet girl who is known for looking very cute but also for never talking and not being very sociable, Natsuki on the other hand has a lot of friends and is pretty popular in class. So the two of them never really had the chance to talk or even found it necessary to do so, but by swapping their notebooks, Natsuki finds out about the story, Hidari secretly writes in her free time. And as she reads what’s written in the notebook, she finds herself strangely interested in it, leading her to some quite sly actions just to ensure being able to continue reading this story…
I don’t think it’s because of the manga’s short length, but somehow I just couldn’t get used to the two main characters. I would even go so far as to say, I dislike them both.
Natsuki is absolutely taking advantage of the situation, blackmailing her later love interest as if it’s the most natural thing in the world and Hidari just lets it happen without even protesting. She didn’t talk in the beginning and that just slightly changes throughout the whole manga.
You could say that she talks through her stories, but these are also kind of messed up and hard to understand considering her situation, so in the end it’s like I don’t understand what’s going on in her head at all.
I don’t really get what Hidari’s writings have to do with her having a crush on the teacher anyway, which was all just randomly thrown into the story without much explanation. It rather seems like the author wanted to add something interesting and unique but failed since things don’t make much sense in the end. So did Hidari really have a crush on the teacher? It sure seems like it in the beginning but considering what happened in the last chapter, it’s either that she never had feelings for her teacher and it was all a misunderstanding or Hidari actually likes being blackmailed and falls for her blackmailer or (and this is most likely to be true) this story just doesn’t make much sense.
So maybe it’s just me and I didn’t fully understand what was going on, but I believe that this manga either had a bigger meaning that I simply wasn’t able to comprehend or it all just ended poorly. I also don’t know whether there will be a second volume of this manga, but at least for me this kind of open end wasn’t very satisfying. Then again, this whole manga wasn’t really satisfying for me in the first place, so maybe a second volume could clear some things up, but it could also make things even worse.
If I haven’t made it clear enough already, then let me just repeat myself once more; I really didn’t like this one, and it could have actually been so much better. The story is simple, yet it has a quite promising premise that could have made things very interesting, if used the right way that is. But it wasn’t. The story took an unnecessarily complicated and messed up turn, letting things end in a way that I just can’t fully comprehend. And just like the simple story, the art looks pretty simple too, but look for yourself:

6 thoughts on “Manga Review: Her World by Hakamada Mera”