Right now Citrus is probably one of the most popular, if not the most popular yuri manga out there, so after the first volume, let’s see whether I think it really deserves its popularity.

Author: Saburouta
Length: 1 Volume, 5 chapters
Status: Ongoing
Scanlation Group: Yuri Project
Read Online
Genre: Yuri, Drama, Slice of Life, Comedy, School Life
Story: 8/10 (for now)
Moving out of your home to a completely new place can be pretty hard, especially if you’re still a high school student who needs to attend a school full of strangers. Unfortunately, Yuzu is not only forced to go to a new school, no, out of all possible schools, she has to attempt a very strict and conservative all-girls school as well. Also her way of “showing off” on the first day of school quickly gets her into trouble with the strict student council Mei, who easily breaks Yuzu’s stubbornness, gaining her the pole position on Yuzu’s mental hate-list just on their first meeting. And as if things hadn’t been hard enough for her already, just when she returns home, she finds out that the one person that caused the most trouble for her that day is also going to be her new step sister…
Up until now “Citrus” has a pretty solid story with a nicely balanced mix of comedy and drama. Furthermore the story is quite intriguing and I’m pretty eager to see how things will turn out, especially because you can never really be sure of how things will actually continue. It’s one of the nice aspects of this manga, it keeps surprising you with some believable twists and turns and with some really great character development.
In addition to that, I think one of the manga’s most important themes, is how the line between love and hate can be oh so very thin. It’s a theme that’s been used quite often in movies, books and what not, yet it’s still intriguing and actually feels pretty unique to me. And Yuzu’s way of admitting her feelings and dealing with them is just way too adorable~
Funny thing is, the one thing that irritates me the most about this manga is probably also the main reason why Citrus is so popular right now. In every single chapter you’ll find a yuri scene between the two main characters, usually a pretty nice looking one as well. Still in most cases the scene happens randomly or at least the explanation that follows (if one follows at all) is rather poor. I mean who attacks their stepsister in the shower, with the plain explanation “It looked like you wanted me to do this”? It’s weird, yet I liked it, still it’s weird…. But that’s what I’m mostly looking forward to in Citrus.
Well you can see that I’m having some problems deciding whether I really see this as a bad thing or whether I simply enjoy the nicely portrayed yuri action we get in each and every chapter. Let’s just say it’s a little bit of both.
Characters: 7/10
Aihara Yuzu: After her mother’s remarriage, Yuzu is forced to move to a different place and attend a new school. She’s the type of girl that always tries to look great, by putting on a lot of make-up and by dressing as fashionable as possible. Unfortunately, this attitude gets her into a lot of trouble just on her first day of school, but Yuzu is definitely not one that would obey others so easily, which gets her into even more trouble on a daily basis.
Aihara Mei: She is the student council and also the granddaughter of the school’s chairman, which earns her a lot of respect from the other students. Furthermore, she’s seems to be a very strict person, who can even be a little cruel towards others, if the way they behave doesn’t seem fit for her. Still it seems that Mei is hiding a lot more behind her always serious expression that she just doesn’t want others to know.

My first impression of both main characters was rather poor, since both seemed to act like typically cliché characters at first. Yuzu behaved like a total airhead who acts before thinking and who is just a tiny bit too girly, fashionable and what not, while Mei on the other hand seemed to be a strict and aloof girl, other students look up to. But even though she plays the role as the perfect student council pretty well, she’s also very skilled when it comes to being a bitch. The only thing probably both girls have in common is the fact that they’re both very headstrong and stubborn. So as mentioned above I didn’t really like them at first, because I’m neither a fan of the manipulative and bitchy types, nor do I like the overly girly and shallow ones.

But fortunately that’s not all there is to Yuzu and Mei and with the following few chapters I’ve learned that they both have different sides to them as well. So Yuzu is not always the airhead she seemed to be, in fact, if she’s really concerned about something, she’s quite eager to do anything in her power to help, which is quite the nice character trait. And in the last few chapters her character really changes from being annoying to being ultra cute~
In Mei’s case it’s probably too early to tell what she’s really thinking and why she’s acting like she is, but it is quite obvious that she doesn’t really want to act like the bitch all the time. Without spoiling you, chapter 5 at least reveals some things about Mei, but there certainly is more to that, so let’s wait and see how that will further develop. Oh and it’s probably also worthy to mention that Mei is one of the sexiest female characters in yuri manga history ever.

And we should also not forget about Yuzu’s friend, Harumin, who is awesome on a whole other level (and pretty sexy as well!)

Yuri: 8/10
As mentioned above, you can be sure to find at least one yuri scene in each and every chapter and for some reason I’m also pretty sure that this will continue on even in volume 2. I think for the pure gorgeousness of the yuri scenes in this one, I should rate this a 10/10, but I can’t since none of the kisses really happened for the reason I wanted them to happen. So each and every time it’s either a way to shut the other one up or it’s an attempt to at least get some one-sided feelings across. Either way I’m waiting for some mutual actions, but if they’ll look just as gorgeous as the ones in this volume, I’m pretty sure it will gain a 10/10 in my final review as well.
Here, have some nice MeiYuzu pictrues~ 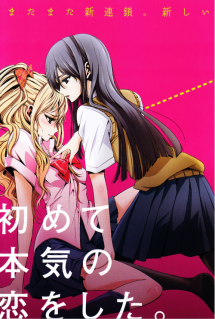 Above I mentioned that the main reason this manga is so popular, is most likely all the MeiYuzu action that is going on, but some yuri action alone won’t do the job. It needs to look good as well and oh do these scenes look good in this manga. I’ve so far never heard of Saburouta and I believe that this is her first yuri manga as well, but with an art style like this and some sexy characters like Mei, I can say that I’m really hoping to find more yuri manga by this artist very soon.
Total Enjoyment: 10/10
In the end I would say this manga definitely deserves its popularity and if things continue the way they are right now, that is Mei being sexy and the both of them sharing some more nice yuri scenes, then I have no doubts that this will be one of the most, or even the most popular yuri manga of 2013.
As you can see, I have high hopes for this manga, but there is one thing that I’m slightly afraid of; I have witnessed this in many anime and manga already and it seems authors sometimes tend to add in some drama and twists and turns, even though they are not completely sure of how to solve the consequent problems in the end, so the final revelation often feels incomprehensible and superficial.  Right now the reasoning for Mei’s actions is the biggest mystery of this manga and I’m really hoping that the revelation of her true intentions will actually make more sense than her reasons for harassing Yuzu…
Nonetheless, as this manga is right now, I only have some minor minus points to hand out, so in my eyes, this still deserves a 10/10, well at least for now.

Find my Review of Volume 2, by clicking here.