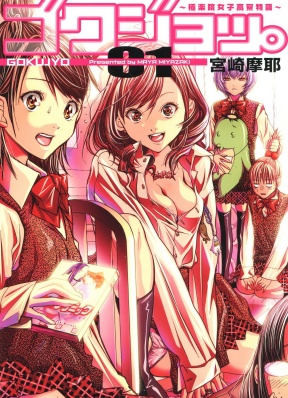 Read Online
First of all, I’m writing a review about this even though the manga is not even finished yet and has only a few translated chapters out so far. Still this is most likely going to be my only review about this series, since I do highly doubt that this manga will change in any way in the near future.
Plot 5/10 and Characters 7/10:
Gokujo hardly comes with any plot, the whole manga revolves solely around Akabane Aya and her daily life in high school, nothing more and nothing less. That said one might think that this manga is boring, but this assumption couldn’t be more wrong, trust me.
Aya, the protagonist of the story is not really the regular school girl you would think to find in an all-girls school, she’s a really special type you could say. So a few words to describe her would be arrogant, vulgar, short-tempered, violent and totally dense. She’s probably the person with the worst personality in the whole school, yet even though she’s such an obnoxious person and likes to harass her friends in the meanest ways, they still love her and keep up with her no matter what she does.
Probably the only thing I liked about Aya is the fact that whenever she’s into something, she really gives her all to achieve it and even uses dirty tricks to get what she wants. Especially when it’s about being sexy or dressing fashionable, Aya gets so caught up in it, that her attempts to outrun all the others always end up looking ridiculous and that’s simply hilarious.
Here’s her attempt at having the sexiest underwear:

But let’s not just focus on her and get to all the other important characters, such as Madoka, a huge pervert with big breasts and an even bigger delusional mind or Asuka, a pretty mysterious and creepy girl who’s maybe a little too much into spiritual stuff. Compared to those two, Aya’s two best friends Konatsu and Ai seem pretty normal, but those two in particular are the ones that usually suffer the most from Aya’s miserable personality, especially Konatsu, who Aya often harasses to release some stress.
Even though this manga is pretty crazy to begin with, the only thing that I kept asking myself was, why the hell Aya’s friends keep sticking with her. This is really a mystery to me, especially the fact that some of her friends even fall in love with her…
Anyways, I think when it comes to this manga, the non-existent plot doesn’t really matter, it’s all about the comedy and the crazy characters. Especially when it comes to the humor used in Gokujo, you either love it or hate it, there is nothing in between. The jokes are dirty, the characters either behave like perverts, sluts or just like total idiots and naked boobs, butts and what not are present in every single chapter. I for example loved this kind of humor, but I’m pretty sure at least half of the people that start reading this will drop it after just a few pages. Still if you’re into “stupid humor”, read this, I can promise you, you’ll have a lot of good laughs. Still keep in mind that this manga is pretty dirty.
Yuri: 6/10
It’s pretty obvious that some of Aya’s friends have a crush on here, but whenever they show their love, it’s either pretty creepy or funny, so don’t expect some actual romance to happen in this one. You could even say, everything that happens between the characters, just happens with the intention to make you laugh. Still even though I prefer a romantic story, reading/seeing some yuri actions in an environment like that is pretty nice for a change as well.
Art: 8/10
Is it just me or do most ecchi works come with quite nice art? Maybe all the naked skin has to look especially good for people to really read it? Ah well anyways, Gokujo comes with quite the nice art and very good looking characters that you can even distinguish if we were to cut off all their hair. Sounds weird, but it’s a fact that many artists draw their characters to look very alike and just add different hair styles so you can tell them apart. Needless to say it’s pretty awesome if an artist manages to draw them to look so much different from one another. And as mentioned above, I absolutely love all the hilarious facial expressions Aya makes, they’re just priceless! 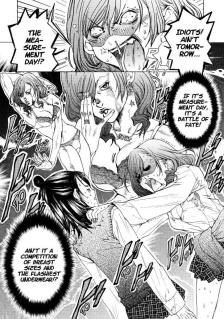 Total Enjoyment: 6/10
I know that this is probably a manga that a lot of people can’t stand, well I would even say for obvious reasons. But in my case, I pretty much enjoyed it, not every part of it, but most of it at least. Also it’s worthy to mention that I usually don’t burst into laughter from just reading something, but Gokujo made me laugh numerous times and that’s quite rare. Still if you’re not into stupid and ecchi humor, stay away from this one.
As a side note: This manga has an anime adaption that I can warmly recommend to those of you, who liked the manga so far. The anime is not as perverted as its manga andall most of the adult scenes (chapters) were taken out, so it’s safe to watch.