It’s been a while since I last posted my list of manga recommendations for you and if you haven’t read it and want to see the titles I listed there, click here.

Lately great manga keep popping up out of nowhere and other manga, that I thought were dropped, are worked on again, so there’s a lot of great yuri manga being translated right now, which is absolutely awesome.
Just like last time, I would like to name some nice ones for you and give you some information about them, to make the decision of “What to read next” a little easier for you. Enjoy!

Title: Fragments of Love
Author: Jin Takemiya
Genre: Slice of Life, School Life, Yuri
Description: This manga is a collection of inter-linked stories that mostly feature selected moments in the life of Mika, a young lesbian woman, who claims to only aim for older women. Throughout this manga, we see how Mika manages to go through good times, as well as bad times and how she mostly deals with it, all in a surprisingly mature way.
Scanlation Group: Lililicious
Read online
For some reason it took me really long until I finally started reading this manga and I can honestly say, that I regret hesitating for so long. I have rarely seen such a great protagonist in yuri manga and I absolutely enjoy how “Fragments of Love” guides us through some of the most important moments of Mika’s life. 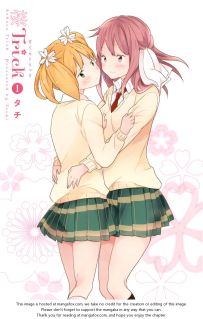 Title: Sakura Trick
Author: Tachi
Genre: Comedy, School Life, Yuri, 4-koma
Description: Yuu and Haruka are best friends and have ever since spend a lot of time together. When entering senior high, the two of them get to know a lot of new people and end up sitting in the opposite sides of the classroom. Since they both realize that spending time together is getting harder and harder, they decide that something needs to be done, to keep their relationship special.
Scanlation Group: Yuri Project
Read online
There are not that many chapters translated yet, but if things stay the way they are, then expect lots of kissing, cute characters and some really cute comedy.
I seriously can’t wait to see a first trailer for its upcoming anime~ 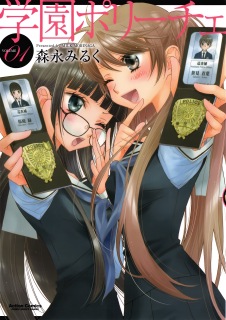 Title: Gakuen Police
Author: Milk Morinaga
Genre: Comedy, School Life, Yuri, Action
Description: From when she was a child, Sasami always admired those who fight for justice and has thus always aimed to work for the police. And after years of training Sasami really managed to fulfill her dream and become a police officer. As her first assignment she is send to an all-girls school, to work there undercover and check whether anything unusual is going on there. Unfortunately she is not as skilled as she would like to be and ends up almost revealing her true identity by trying to capture a seemingly suspicious student.
Scanlation Group: Yuri Project & MakiMaki Scanlations
Read online
When it comes to Milk Morinaga, you can almost be sure to find yet another great yuri manga and Gakuen Police definitely doesn’t make an exception. This one is a little different than her usual love stories and the romance is also happening a little slower. But I think that’s one of the aspects I like most about her manga, love needs some time to happen and we surely will see some nice yuri moments in this one as well.

Title: Gokujo
Author: Miyazaki Maya
Genre: Comedy, School Life, Adult, Weird, Yuri
Description: Akabane Aya is probably one of those people you never want to make friends with. She constantly harasses her friends, lies on a daily basis und tries to outrun her friends and classmates in everything they do. Unfortunately for her, she usually ends up making a fool out of herself or simply hurting herself in the process.
Scanlation Group: Sexy Mama Scanlations
Read Online
As mentioned in my previous review about this manga, most of you will probably not like this one very much. So prepare for stupid and perverted humor with a lot of weird characters and some absurdly crazy happenings. If you can actually handle that, then I’m sure you’ll come to love this one.
Title: The Flower and the Star 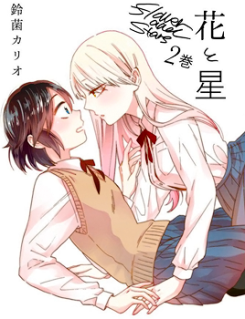 Author: Suzukin Kario
Genre: Angst, Drama, School Life, Comedy, Yuri
Description: Hanai is the best table tennis player in the whole school and won against numerous opponents. However, as soon as she loses against a freshman she hasn’t even met before, she suddenly starts loosing every single game. Since Hanai can’t take it anymore, she completely quits table tennis, but unfortunately she meets the girl that she thinks is responsible for her bad luck again and is even forced to sit next to her at school…
Scanlation Group: Yuri Project
Read online
It’s seriously so entertaining reading how the two of them just can’t get along with each other since neither of them really understands the other and especially Hanai always ends up getting the wrong idea. It’s really a nice start for a relationship and oh so very entertaining~

Title: Akuma no Riddle
Author: Yun Kouga
Genre: Action, School Life, Yuri, Drama
Description: At a boarding girls’ high school where every student is an assassin, they target only one life – “Ichinose Hare”. Similarly, “Azuma Tokaku” is an assassin who transferred schools to target her, however she gradually became attracted to “Hare” and decided to protect her. Extreme school life START!
(mangaupdates.com)
Scanlation Group: Kadavra Scans
I haven’t really had the time to start reading this one yet, but for the simple fact that this manga is getting an anime adaption in 2014 as well, you could almost say I’m obliged to read and see what this is all about. So let’s all hope for some nice yuri in this one as well.