Author: Itsumi Takahashi
Length: 1 Volume with 8 Chapters
Year: 2009
Genre: Drama, Historical, Romance, Incest, Comedy, Yuri, Adult
Scanlation Group: Tsundere Translations
Story 7/10 and Characters 9/10:
The story takes place in Japan, during an age ruled by an emperor. Our two protagonists, Tachibana and Sakura meet during their childhood, when Tachibana’s father takes Sakura in, after her parents were murdered by some thieves. The two girls become friends pretty quickly and at some point even cross the line between friendship and love, but during that time, young girls of such high status as Tachibana were obliged to marry a suitable man as soon as possible.
While trying to keep their relationship a secret, they go through a lot of hardship together, but when the emperor himself demands Sakura to join his harem, things couldn’t look worse for the two.
Unlike Takahashi’s “Love Flag Girls!!”, this one takes things a little more serious and the main focus of the story is not set on the comedy, but more on the drama. Furthermore smut is also a big part of this manga, but the amount of sex is still a little less than what Love Flag Girls delivered us in that department. Also one of the best things about this manga is not the smut, I simply enjoyed this for the awesomeness of Tachibana and of course for the girls’ oh so romantic and cute relationship.
So needless to say, Tachibana was my favorite character; she never showed weakness and fought selflessly for the sake of her love, even during situations that seemed completely hopeless. She was called a tomboy on various occasions, but I don’t really see why, since she neither looks very manly, nor did she behave like a boy. All she did, was trying to keep her love out of harms way, things sometimes just got a little rough. However Tachibana was still more than only once wishing to be a man, to be able to save and be with Sakura, which is also quite the nice conflict, considering the fact that as a man she would have probably never even met Sakura to begin with.
I don’t wanna spoil you all too much, but since the ending was pretty unique, I want so say something about this as well. So first of all, I really didn’t see an ending like this coming, even though I was suspecting there to be a happy end for all of them. However, the way things turned out was a surprise, a positive one if I can add that, but still a weird outcome. And the conclusion of it all was simply, that everyone is a pervert.
Nice.
Oh and one more thing, the two protagonists are cousins, so if you’re not ok with incest, don’t read this one.
Art 7/10:
Just as I said in my prior review, Itsumi Takahashi’s art is really cute and quite nice to look at, but yet again nothing special, well at least not in my eyes.
Yuri 9/10:
Just like “Love Flag Girls!!”, this one comes with quite a lot of yuri action. And with that I mean that you will get to see a loooot of kissing, a lot of romance and just an equal amount of sex. Unfortunately there’s also some rape involved. It’s nothing really that graphic and I think, as weird as it sounds, it kind of worked well with the story setting, but it’s still rape, so just keep that in mind before reading this.
Total Enjoyment 7.5/10:
I’ve probably been comparing this one to “Love Flag Girls!!” a little too much, but I can’t help it, since these are my last two reads and they are pretty similar in one way or another. But which one did I like more?
I think I liked them almost equally. They both have a very unique setting, great main characters and such a high amount of yuri that I’m sure that you will come to like them as well.
However, there was something about “Itoshi wo Tome”, that made me enjoy this one a little more. I think it might be the fact that this one had a far more serious atmosphere going on, which is why I was more eager to find out how things continue.
But anyway, I think you should find out about it yourself, so if you haven’t already read it, click here. 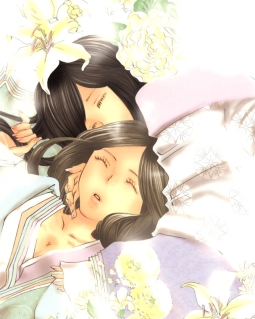