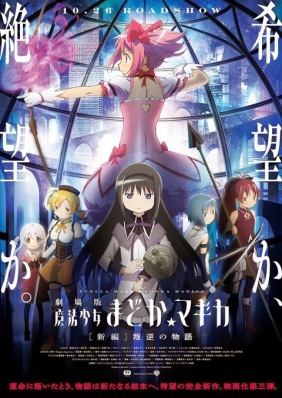 I was seriously considering waiting for this movie to appear somewhere in better quality, but in the end, my impatience got the better of me, so I actually watched the crappy camrip.
If my impatience to finally watch this, doesn’t make it clear enough already, let me just tell you this; I loved the anime as well as the first 2 movies, which were recaps of the anime anyway. And knowing that there is a sequel to this already amazing anime, I just couldn’t wait any longer.
Most of you have probably not seen the movie yet, so I’ll warn you before you continue to my actual review. There will be some spoilers and those might ruin your watching experience. So if you only want to know whether this movie is watchable and how I rated the single categories, skip to “Final Enjoyment” at the end of this review, where I will list all my ratings.
So, first things first, when I heard the news that there will be a sequel to the Madoka anime, I was torn between eternal excitement as well as wariness. The anime was, as I would say, an almostperfect show, on which many fans will agree with me. And of course if something’s that popular, why not make even more money out of it?
Nothing’s really wrong with that so far, but in many cases, what is being released after the actual story, often doesn’t even come close to the brilliance of the original work and sometimes, it can even destroy the whole series. I mean just remember what Kaishaku did with Himeko and Chikane…
But anyways, I can proudly say that this movie doesn’t only scratch the awesomeness of the anime, no, it is equally great and it truly deserves to be its sequel.
Story 9/10 and Characters 10/10:
To be honest, I was a little surprised when I started watching this movie. The trailer and the sneak peeks that I had already watched, made it look like this movie would somehow start off where the anime had left off. However, you’ll spend almost half of the movie thinking that it’s not a sequel, but rather takes place in an alternative universe or maybe in another timeline. In my opinion, it took this movie a little too long to get to the point, even though I enjoyed those kind of carefree and happy moments during the first part of it.
So the plot revolves around the lives, our 5 Magical Girls spent in Mitakihara, after the events of the anime. You already think that there’s something wrong with this? Then you’re damn right! So after a while, Homura notices that there’s something wrong, not only with the city and the people living there, but in general with the whole situation and the fact that the 5 of them are still together fighting “Nightmares”. 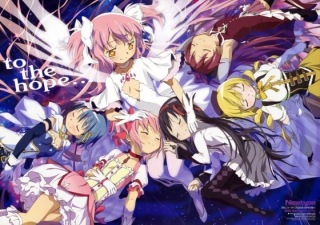