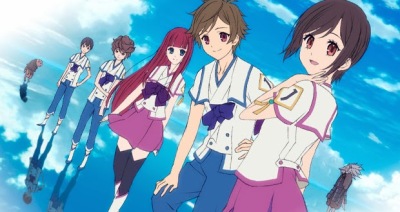 I know, I know, Shinsekai Yori is not a real yuri anime, but I guess we are kind of short on pure yuri shows this year, so I have no other choice.
I bet some people hate me right now for not going with other shows such as Vividred Operation or Symphogear G, but to be completely honest, I only watched a few episodes of both shows and then dropped them.  So what is really left? I could go with Psycho Pass, but the yuri was too little, or how about Yuyushiki or Love Lab, but there were no confirmed couples in these shows at all.
So in my eyes, the only show that really deserves this award is Shinsekai Yori. It had a great yuri couple and some stunning and beautiful yuri scenes. I know it didn’t have a yuri ending, quite the opposite actually, but that doesn’t change the fact that Maria and Saki made for some splendid yuri scenes~
Best Non-Yuri Anime: Shingeki no Kyojin 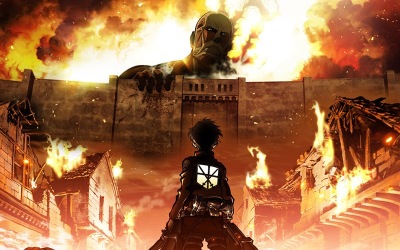 What a surprise! It was surely totally unexpected that I chose Shingeki no Kyojin in this category…
Yes, I know, this was totally not unexpected at all.
But truth be told, I actually did consider going with Kill la Kill in this one. I just recently started watching it, but it got me pretty excited within just the first few episodes, which is awesome.
Still, I don’t think it can really cope with Shingeki no Kyojin’s awesomeness, but I want to at least tell you that I considered choosing it.
Best Yuri Manga: Citrus by Saburouta

And here comes another surprise…
I don’t even know what to say to this anymore, since I wrote about it so many times already. So let’s just say that some people love it, while others don’t. But let’s be honest here, those who don’t like it, either do so because they really think the story and characters are shitty, but many others simply don’t like it because they are annoyed with the people who do like it.
Sounds stupid, but it’s true.
Needless to say I’m in love with Citrus, but I don’t need to tell you anymore, it’s a well known fact already 😉
Best Yuri Anime Character: Akane (Walkure Romanze) 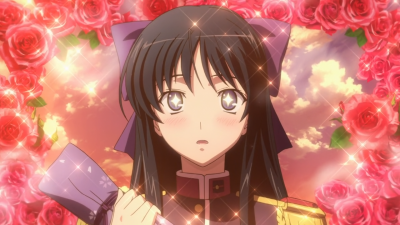 I have absolutely no doubt that I made the right decision here. Akane is the perfect character in every way.
I think most of you will probably not even know the anime Walkure Romanze, which is understandable considering the fact that this is at best a mediocre show. But still, this anime managed to have one of the greatest characters in history. Well, at least in my opinion.
Anyway, if you don’t know Akane yet, I’d just recommend you to watch episode 7 of Walkure Romanze. It’s awesome!
Best Yuri Manga Character: Yuzu (Citrus)

I had 4 characters in mind when thinking about this category. There were Haru (The Flower and the Star), Yuri (Notes from the Garden of Lilies), Yamada (Kase-san and Moring Glory) and Yuzu. But even though all of the said characters come with exactly those character traits that I love, Yuzu is definitely the cutest and also the one that makes me squeal the most.
I know I said it about 100 times already, but one more time probably won’t hurt.
Yuzu is absolutely gorgeous and cute beyond believe, how can you not love her?!
Best Non-Yuri Character: Ryuko (Kill la Kill) 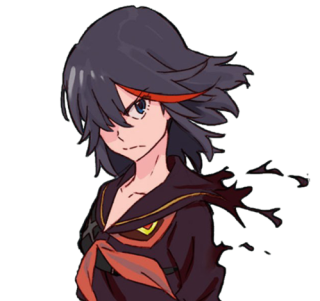 As mentioned above, I just watched Kill la Kill, a pretty weird yet totally awesome anime of the current anime season. Actually many of the characters of Kill la Kill are pretty damn great, but without doubt, the main character Ryuko is the greatest. She’s a total badass, who doesn’t fear anything, but she also has a super cute and easily embarrassed side to her. On top of that she also has one of the greatest voices of all time. Seriously, her voice actress is a genius!
The only downside to her is probably her skimpy fighting outfit, but we can’t really make her responsible for that, so we can overlook it.
Best Yuri Visual Novel: Sono Hanabira – Atorie no Koibito-tachi 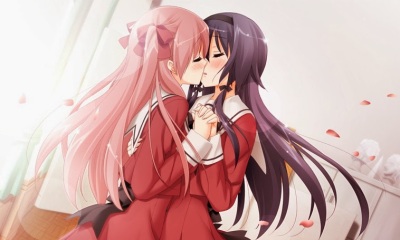 To be honest, “Atorie no Koibito-tachi” is probably the only Visual Novel of 2013 that I actually started playing. The problem here should be obvious. The translations for these games won’t just be done within a few months, so those of us who can’t speak Japanese have to wait for a bit longer to actually play these games. Nonetheless, since there is specific software available that at least helps us understand the games a little, it is possible to play them and that’s what I did.
I actually wanted to name “Michael no Otome-tachi”, since this one has a lot more to offer than “Atorie no Koibito-tachi”, but I just realized that it was released at the end of 2012, so I had to go with this one instead. Risa x Miya sure is a great couple, don’t you think?
Best Anime Opening: Fripside – Sister’s Noise
http://youtube.googleapis.com/v/lS2WAYo1mGw&source=uds
There is seriously not one opening of To Aru Kagaku no Railgun that I don’t love.
Also Fripside is simply awesome, so of course this makes one of my favorite openings of all time and my favorite opening of 2013.
Best Yuri Canon Pairing: Yayoi x Shion (Psycho Pass)
I really wish those two of them had a little more screen time. It was such a pity that whenever we saw them together, the scene was either too short or there was nothing going on between them. But rest assured, there will be a second seasons and I really hope we’ll see more of them.
I’m actually quite confident about that. The two of them are pretty popular already, so the creators hopefully noticed that as well and will put some special scenes in for us fans~
Best unofficial Yuri Pairing: Ymir and Christa (Shingeki no Kyojin)
2013 has yet again been a year full of great yuri Precure doujinshi, especially about the pairing ManaxRikka. Love Life as well has developed into quite the yuri goldmine with pairings such as NicoxMaki and ErixNozomi. Furthermore there’s Kantai Collection, a game that is quickly gaining more and more popularity and that has a lot of great yuri pairings to offer as well.
But despite the great amount of competition, I think Ymir and Christa deserve this award the most. Some people claim those two are already a canon pairing, and the manga sure gives me the same impression, but still, they are not confirmed yet and I sure hope they will survive long enough to actually make their relationship clear to us.
Go YumiKuri~