Just a few more days and it’s 2014 already. For some reason this year passed by pretty fast, at least for me, but that’s absolutely no bad thing since I just can’t wait for 2014.

So in this entry I’m going to name the things I’m waiting for the most. These will most likely be anime, but also movies, OVAs, manga and Visual Novels.
Please note that many of the anime I’m going to name are already announced, but in most cases there is no information about their release date out yet. That’s why I’m going to divide this entry into 3 parts to make the list a little clearer.
Stuff that will be released in 2014:
Sakura Trick Anime
Let’s start with the one thing many of you are probably anticipating the most, Sakura Trick. The first episode will air on 9th January, which is just a few weeks from now on and I can barely contain my excitement for this show. A pure yuri anime with (seemingly) various different couples and a lot of cute kisses? Sounds great!
I really hope that this show will be successful, so that everyone can see that the world needs more yuri!
If you haven’t done so already, here’s a short preview for you to watch:
http://youtube.googleapis.com/v/YQKKh-wpOIM&source=uds
Akuma no Riddle Anime
I have only read a few chapters of Akuma no Riddle, but what I’ve read so far looks really interesting and if there’s going to be at least a small amount of yuri, then this is going to be great.
There is unfortunately no information about the exact air date out yet, but this one will most likely start in spring. I’m having high hopes for Akuma no Riddle and I’m quite happy that they chose a yuri action show this time. It’s great to have 2 yuri anime for 2014 with such different themes. A cute comedy and a (hopefully) intense action anime.
How nice~

Kantai Collection Anime
Many of you probably don’t know what Kantai Collection is, which is no surprise, since this is a Japanese online card game that most of us can’t play anyway. I personally think this doesn’t sound all that interesting, but I haven’t played it yet and people in Japan seem to really love it.
Long story short, this game is packed with possible (or even confirmed?) yuri pairings and there are already a great number of yuri doujinshi about this game out.
But that’s not really what I wanted to talk about.
This game has gained a lot of popularity already and they announced an anime adaption that is scheduled for 2014.
As already mentioned, I haven’t played this game yet and won’t any time soon, but I am actually hoping for some nice yuri in this one, even if it might just be subtext.
Maybe it will turn out very yurirific, who knows?
More Sono Hanabira Visual Novels
The newest SonoHana game has just been released and there is already a new one announced. “The Angel’s Promise” will be the last game of the Angel series and it will feature two new characters, Inatori Akira and Hikawa Narumi.
There is not much information about this one out yet and personally I would prefer to see another SonoHana release outside of the Angel series much more. But I shouldn’t complain, it’s still most likely going to be a great yuri game anyway.
If you wanna know more about this one, check out http://petalsgarden.axypb.net/

More Citrus
Did you seriously think I would let this opportunity go to waste and not talk about Citrus again for what seems to be the 100th time already? Well, you thought wrong.
So this is probably one of the ongoing manga, besides Flag Time, that I’m really in love with so much that I’m counting the days until the next chapter will be released. Since many people asked this already, let me just tell you this:
The next chapter will be released in mid-January, I think sometime around the 18thand every new chapter will then come out bi-monthly.

As an unrelated side note: I didn’t really want to put this in the list, but I feel like, even though this is absolutely not yuri related at all, I still want to name Super Smash Bros. U, which is the only game that I’m really waiting for to come out right now. And since it’s gonna be released sometime in 2014, I think this should be mentioned as well.
Stuff that is confirmed but has no release date yet:
Yuru Yuri season 3
The information that there will be a third season has been around for a while now, but there’s unfortunately no more information available right now. I’m really happy with this news since I loved both seasons of Yuru Yuri.
But then again, I’d be happier if they chose another Yuri Hime manga to get an anime adaptation instead. *cough* Citrus *cough*

Strike Witches season 3 and OVA
Just when I finished watching the first 2 seasons and the movie, another season as well as an OVA was announced.
In this case as well, there is not much information out yet, so I’m not sure whether the new season will yet again feature Yoshika and friends or the new girls that were introduced in the movie. Well, it’s probably going to be both.
In any case I’m really looking forward to see more half naked flying girls. 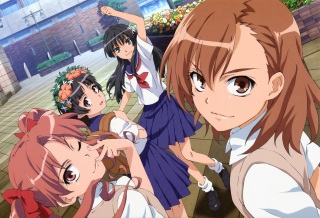 Shingeki no Kyojin season 2
The manga is still ongoing, the anime ended with a cliffhanger and this season an OVA was released, giving some back story.
I don’t really know how things work in the anime industry, but I’m pretty sure this all hints to a second season and I would even say that it won’t end with only that.

Psycho Pass season 2 and movie
I just found out about this some days ago. So apparently there will be a second Psycho Pass season as well as a movie. Both of which will come with a new story but seemingly the same characters.
I really enjoyed season 1, so I’m looking forward to both, the movie and the second season.
And of course I’m hoping for some more YayoixShion~

Stuff that I’m hoping to see in 2014:
Binbougami ga Darkness
The short preview at the end of season one that was hinting at a second season called “Binbougami ga Darkness” was probably just a joke, but I really wouldn’t mind if it wasn’t.
I’m pretty sure I read somewhere that they are actually planning to continue the show, but I’m not sure about that and I can’t find information about it either, so let’s just wait and see. 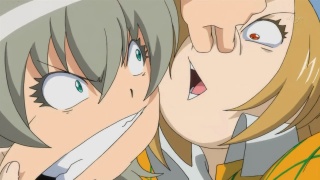 Love Lab and Yuyushiki season 2
They are both shows of 2013 and at least I feel like they were somehow similar. Comedy shows with some female students having fun together, while occasionally throwing in some yuri subtext.
This combination sounds great, which is why these two shows count as 2 of my favorite shows of 2013.
In both cases a second season is possible, but nothing is confirmed yet and as far as I know there’s also no information concerning that matter.

Another Sono Hanabira OVA
I’ve been waiting for another Sono Hanabira OVA for a while now. Well, it doesn’t necessarily have to be an OVA, an anime would be even better. I wouldn’t even care if it was an 18+ one or not, but considering the fact that there is already an OVA about Mai and Reo, there might be another one released at some point as well. Also SonoHana seems to be pretty popular, so now would be the right time to release something like this 😉 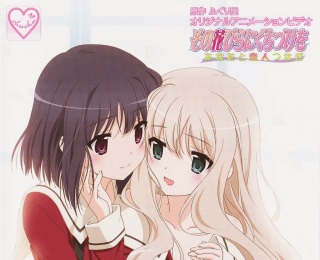 Other than that there is one more thing I’m looking forward to, but this event will take place in 2013, actually it is taking place right now. I’m talking about Comiket 85, where hundreds of great yuri doujinshi will be released, as well as some awesome music (and other stuff). Personally I think the Comiket is like the best time of the year, so I’m very hyped right now and I already got my order ready.
Well anyway, I hope you all had a great year and I wish you guys the best for 2014~