Story: 7.5/10 & Characters: 8/10
Inari Fushimi is a pretty average middle-school girl. She isn’t very bright, looks quite average, and like many other girls, she also has a crush on her male classmate Tanbabashi. Since she cannot express her feelings very well, her crush seemingly didn’t notice her yet and even seems to be interested in another girl. Driven by jealousy and the wish to be someone else, she finds herself in the chambers of the deity Ukanomitama-no-kami, who grants her one special wish.

Despite the already mentioned characters, namely Inari, Tanbabashi, and Uka-sama, other deities and Inaris family as well as friends also play a big part. For example, we have Inari’s childhood friend Keiko, who’s pretty tomboy-ish, then there is also otaku Maru, and the most recent addition to their circle of friends, Sumizome.

Unfortunately, I think all three of them are somewhat more interesting than Inari, who is a very nice and even endearing character, but that’s unfortunately about it. Also, her crush on Tanbabashi often annoyed me, but it is one of the main themes of the whole anime, so I guess we have to deal with that….

The characters I probably enjoyed the most are Uka-sama, who is one of the most gorgeous characters I’ve seen in anime in a very long while, and on the other hand, there’s Sumizome, who is not only really cute, but also a surprise yuri character. How nice~

Coming back to the story, I can say that there is not that much going on. Inari gets her powers, uses them every now and then, sometimes gets into trouble, and sometimes saves the day. In the end, there’s fortunately a little more to the story than just that. So as it turns out, the more Inari uses these powers, the more divine power she drains from Uka-sama, which will eventually lead to Inari becoming a goddess and Uka-sama disappearing.

I really liked that twist and I enjoyed how their human/god relationship worked, in general. Also, even though it was clear from the very beginning that Uka-sama takes a motherly role for Inari, these two were nonetheless really adorable together, don’t you agree?

In the end, even if the story wasn’t exactly thrilling, I don’t think that that’s really what this anime wanted to be in the first place. It was mostly a cute show with some drama here and there. Also, as already mentioned, the depiction of the interaction between humans and gods was quite interesting, even if it mostly only happened between Inari and Uka-sama.

Sound: 8/10 and Animation: 8/10
I loved both the opening and the ending theme, but no surprise there. May’n is just an awesome artist, and both songs were perfectly fitting for a show like this~

Also, I have to mention that I only started watching this anime because of how great the animation looked in the trailer I saw. It’s so bright and colorful, and the characters look so gorgeous and cute. In short, it’s just a feast for the eyes.

Yuri: 5/10
As already mentioned, I really like InarixUka, even though Inari is obviously in love with Tanbabashi and Uka-sama clearly has a crush on Inari’s older brother. Still, I’m shipping them…. But more importantly, this anime even has a real yuri character for us to enjoy. Sumizome seemingly immediately fell in love with Keiko the moment Keiko saved her from a guy that was following her, and from that point on, she doesn’t really try to hide her feelings. She even confesses her love for Keiko to Inari and Maru, getting their support in return. 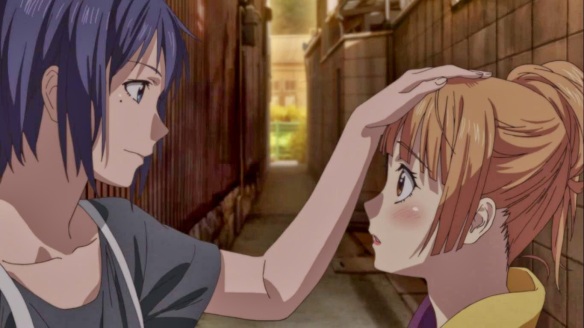 They look really great together, don’t you think?

Throughout the entire show, there are quite a few very cute SumizomexKeiko moments, but the real deal only happens in later chapters of the manga. So since Inari, KonKon was only 10 episodes long, all we can do now is hope for another season.

Total Enjoyment: 8/10
I only started watching this anime because I thought the animation looked great, but as a yuri fan, I must say, I was quite lucky I picked this one. Even though it’s not much, the show keeps that yuri tension that has been around ever since episode one and even hands out a really great yuri character. However, even if it’s not for the yuri in this show, Inari, KonKon was a quite a nice watch, and I’m already hoping for another season.

By the way, an OVA will air this year in June.