Story: 7/10 & Characters: 9/10
2014 started in the most pleasant way possible. Not only did we finally get another pure yuri show after such a long time of waiting and only dealing with yuri subtext shows, it also surprised us with the sheer amount of yuri goodness that is packed into each and every episode of Sakura Trick. But wait, I think I’m already getting ahead of myself, so let’s start with the plot first.

The story starts with Haruka and Yuu getting ready for their first day of high school. They luckily end up in the same class, but Haruka fears that their relationship might start drifting apart, thanks to the many new friends the two already made on their first day. So since the two of them want to prove just how special their relationship is, they decide to share a kiss.

Other than Haruka and Yuu, there are a lot of other important characters, and among them, also quite a few more yuri ones. For example, there are Kotone and Shizuku, who recently started living together. I really wanted to see some more of them, since Kotone, who seems really carefree and fun, and Shizuku, who is really shy and quiet, make quite a cute couple.

Furthermore, there are Kaede and Yuzu, who are also in the same class as the 4 girls I’ve already mentioned. They are probably the only two characters in the show that don’t have any lesbian tendencies, and it’s quite amusing to see them, or more precisely Kaede, slowly finding out about Yuu and Haruka’s secret relationship, while Yuzu is totally oblivious to this obvious fact. 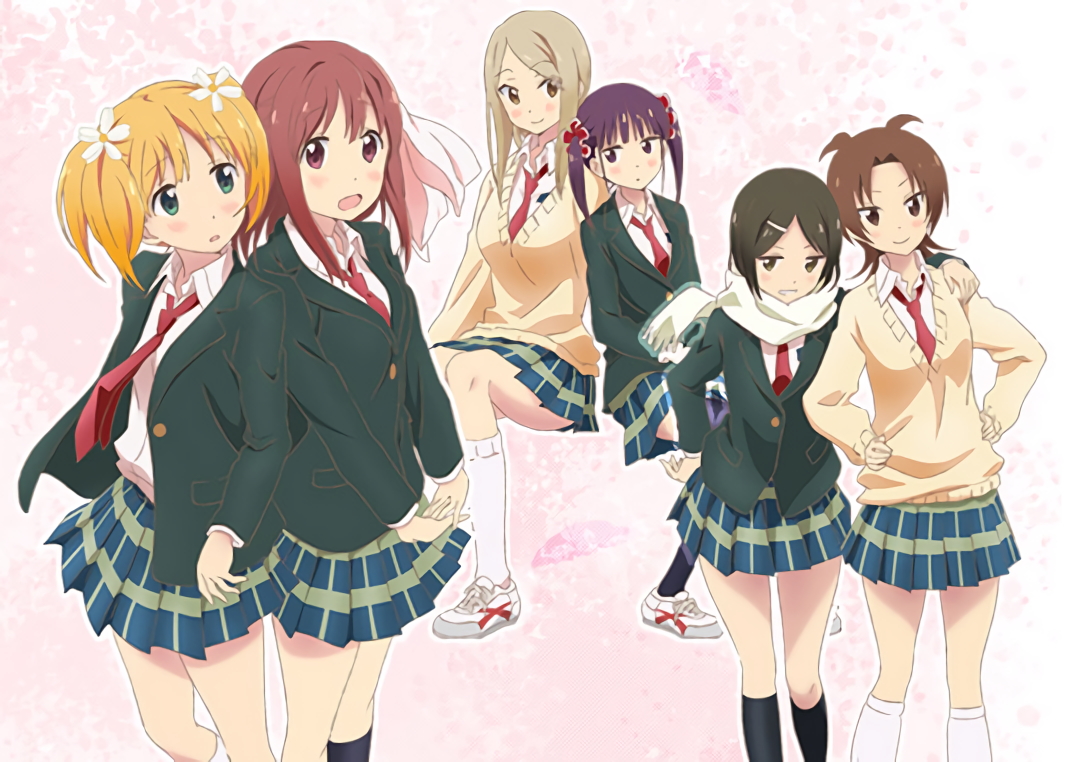 Last but not least, we also have Mitsuki, Yuu’s older sister, who’s a tsundere at heart, but also one of the cutest and most hilarious characters of the whole show. She’s also the main reason Sakura Trick eventually developed something like a real plot within the last few episodes. So since she catches Yuu and Haruka in a very suspicious pose together, she decides to observe the two, to make sure her precious little sister doesn’t go out with another girl. However, while observing them, she also develops feelings for Haruka, and thus causes some problems for both Yuu and Haruka, but also for herself. 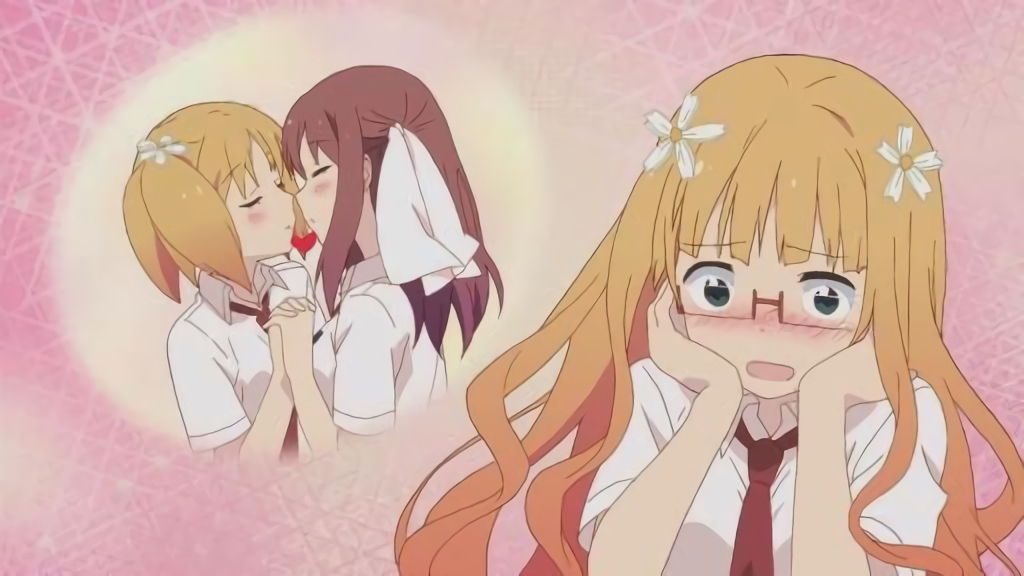 Too much YuuHaru is not good for you, Mitsuki….

If I had to name a favorite character, I’d probably go with Haruka, because she’s basically the perfect girlfriend and also one of the greatest yuri fangirls in yuri history. Yuu, on the other hand, was often a little annoying and even bossy, but she luckily also had her cute moment, and these sometimes just melted my heart~ All in all, I think the show was packed with great and lovable characters, and I basically loved them all.

The only thing that was really missing in my eyes is probably some more drama. The show tried sometimes and just threw in some random drama, for example when Kotone’s little sister tried to force Kotone to go along with the arranged marriage. But still, in the end, there was no real conclusion to that. But then again, the anime didn’t cover the whole manga, so I guess I should just wait for more chapters to be translated.

Yuri: 10/10
I think I don’t have to justify why I gave this anime the perfect score in this category. I mean, I have never, ever seen more yuri kisses in anime before. You’ll find a few kisses in each and every episode and almost every important character at least has some lesbian tendencies. Even Rina showed her yuri potential in the last episode….

Sakura Trick seriously delivered more yuri than all yuri or yuri-ish shows did altogether within the last few years. Also, what really surprised me in the most pleasant way possible is the fact that the yuri actions in the show, or more precisely the kisses between the characters kind of evolve. In the first episode, I was already pretty surprised, not only by the length of the first YuuHaru kiss, but also by the fact that you can hear them moaning. I wasn’t expecting that at all, but it gets even better. Not only do we find them in different locations and different poses in each and every episode, no, we also see how their kisses get more passionate. And with that, I mean the following:

When I first saw that tongue, my head literally exploded.

Unfortunately, we didn’t see such a glorious moment between Kotone and Shizuku, but I can’t really complain, the two of them got more screen time than I expected. And even though we only saw a few kisses between them, they were always soooo cute~

Sound: 8/10 & Animation: 6.5/10
I guess I’m not the only person who often finds herself humming the melody of the opening theme of Sakura Trick. I really didn’t expect the music to be that good, but both opening and ending theme literally made it in my favorite anime music list~

The background music was pretty nice as well. I haven’t gotten my hands on the OST yet, but there are already some tracks like the sexy saxophone theme that I will probably play over and over again.

Talking about the animation is a little more difficult in this case. It’s an ecchi show, so you already know which parts they put most effort into looking good. Also, the viewing angle might have switched to these specific body parts a little too frequently for my liking. In addition to that, most characters look really detailed, at least compared to the sometimes bland and dull-looking backgrounds.

I also often noticed that when you pause a scene and look at the characters in the background, they sometimes look kind of weird… like their faces look really odd. All in all, I don’t really think the animation was that great, but at times when I really wanted to see some fluid movements and great-looking animation, they did a great job. And with that I just want to say that the kisses look absolutely beautiful and stunning~

Total Enjoyment: 9/10
I was so worried that this anime might turn out boring, stupid, and simply not appealing for most people, but I guess I was wrong. Not only did Sakura Trick receive a surprisingly high amount of attention, it also got licensed by Sentai Filmworks. How great is that?!

In the end, I guess I was worried over nothing. And even though Sakura Trick didn’t really have much of a serious plot—or a plot at all—it proved that pure yuri cuteness can be just as satisfying as any other show, and I sure hope that I’m not the only person who realized that. For the yuri fans, this is simply a must-watch. For everyone else, just take a look at the first episode and decide whether to keep watching after that. Finally, I think Sakura Trick is like a mix between Strawberry Panic and Yuru Yuri. Almost everyone is a lesbian, and there is no real drama, but instead a lot of random comedy. And for some reason, that’s a really nice mix~