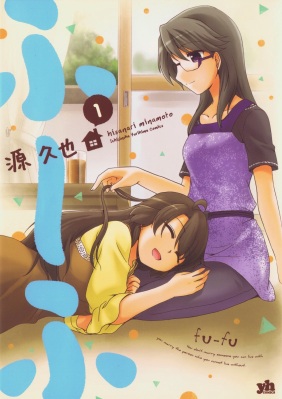 Simply put, Wife and Wife is just about our two protagonists, Sumi and Kina, who recently started living together as a couple. We simply get an insight into their everyday life and experience events like buying a bed together, going on a short trip, or just meeting up with some friends. It doesn’t sound like much, but all their adorable flirting really makes each and every chapter very enjoyable, and there sure is a lot of flirting going on~

After the two main characters are introduced, we get to know a few more characters, such as Kina’s twin sister Kanana, some of her potential love interests, as well as Sumi and Kina’s new neighbors. Interestingly, all of the characters are lesbians, both main and side-characters. No exceptions. So, yeah. It feels a little weird, since this makes it look a little ridiculous, but for us yuri fans, this is, of course, a most welcomed setting.

I mostly enjoyed each and every one of the girls, even though I feel like many of them were not properly introduced to us. I also often caught myself hoping to just read about Sumi and Kina alone, instead of having loads of other characters around. You see, whenever the two are alone, they are just so cute together. Flirting with each other like there’s no tomorrow, and I simply don’t want others to interfere. 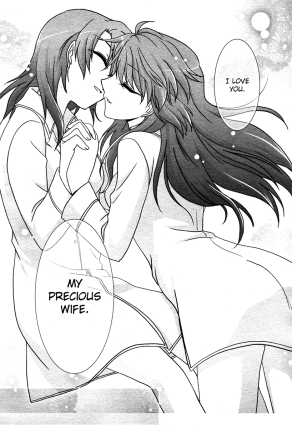 The only thing that I probably didn’t enjoy is the dialects that the characters use. It would most likely feel a little different in Japanese, but since I read the English translation, it often sounded weird, at least to me. In some cases, their dialects even ruined some nice and heartwarming moments, but this luckily only happened once or twice, so it’s fine.

So I guess if you haven’t read Wife and Wife yet, and have nothing better to do, then why not give this one a try? It might not be the best yuri you’ve ever read, but it’s a nice read nevertheless.