Story: 6.5/10 & Characters: 7/10
In short, the story is about 9 girls, who one after another, find their way into a girl idol group that is created for the sole purpose of getting enough students interesting in their school, in order to not have it shut down. However, on their way to reach this goal, they enter a certain event called “Love Live”, which works like a tournament to find the best school idol group in the country.

As it seems, this kind of idol culture is really taking over in Japan. I haven’t seen many of the numerous idol anime that have been popping up lately, so Love Live! is one of the first ones for me, and it will probably also be my last. Despite the fact that my last statement might sound quite negative, I can assure you that I still enjoyed Love Live!. Not for the idol anime this is meant to be, but for a fun show with good characters. I know, like 50% of this show is the girls dancing, singing, or improving their skills as idols in any kind of way, and while I don’t like seeing them actually performing, I love the rest.

The group of girls is just fun to watch, even though I do often forget about some of the members. Honoka, Umi, and Kotori, who are like the main group, have the most screen time, while other characters like Rin or Hanayo tend to be forgotten. Other characters like Maki and Nico only stand out because they are either totally annoying, such as Nico, or because they are somehow a little more important to the group than others, like Maki. Then there’s also Eri and Nozomi, who in my eyes didn’t get enough screen time at all, but that’s just my personal preference, because these two are my favorite characters.

I guess you can say that despite their individual talents, all of the different characters work really well together. Still, I’m not happy with the distribution of roles. One character composes the songs, another one writes the lyrics, and then there’s also one who makes the costumes. These should be the three most important characters, yet Honoka, who can’t do anything except for being annoying, is the main character and has the most screen time. Ah well, I guess it’s hard to give 9 characters an equal amount of screen time, so it’s not as bad as I make it sound. Also, Honoka is still nothing compared to Nico when it comes to being annoying. I was sometimes really on the brink of stopping the episode, just because of Nico and her annoying catchphrase “Nico Nico Nii”.

Honestly, this was not cute at all, but really annoying instead. Last but not least, I’d also like to mention that I was positively surprised by the ending of this anime. Shows like this usually end with the band achieving their biggest goal, but despite the fact that they managed to get enough people interested in their school, they didn’t even manage to participate in the Love Live event, which was really surprising. But as I said, it’s a positive surprise. Also, since the second season is currently airing, they have enough time to catch up on that now.

Music: 8/10
Well, Love Live! is an anime about idols and music, so we get a loooot of different songs, and despite the fact that I’m quite fascinated with the way they made so many catchy songs for this show, I still can’t say that I liked them. I do love Japanese music, but just not this kind. Nevertheless, this rating needs to be as high as it is, simply because I’m quite sure the soundtrack will appeal to a lot other people.

Yuri: 3/10
I yet again decided to watch this specific anime because of all the great yuri doujinshi that are available about the characters. NicoxMaki is probably the most famous pairing, closely followed by ErixNozomi, but there are other, smaller, pairings such as UmixKotori or UmixEri around as well.

Just like with Pretty Cure, the anime doesn’t really have any yuri at all, yet so many people decide to write about them. That makes you think that something just has to be going on between the characters. But nope, it’s not, at least not in the first season. Well, I almost forgot. There is some breast groping going on, but that’s about it. 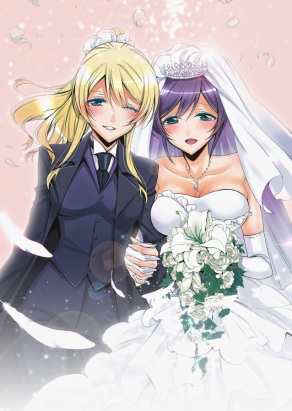 Total Enjoyment: 6/10
Finally, I can say that I don’t like the idol aspect of this anime that much, but that’s obviously the main theme of the show. Then again, I really enjoyed most of the characters, even though some of them were really annoying. I guess in some cases, the really great characters make up for the really annoying ones, and apparently, they also helped me like the idol aspect a little more.

Well, maybe I’m just not a fan of this genre, so you might disagree with my rating, but I just can’t help it, this whole idol thing is just not my cup of tea. Still, I’m going to watch the second season, maybe it will be better.