It’s finally time for the first Guest Review here on YuriReviews! So today my friend “Rock The Vogt” will take over and review one of the many yuri-ish shows that I still haven’t managed to watch. Get ready for the first review on YuriReviews with no grammar mistakes. 😛
Enjoy! 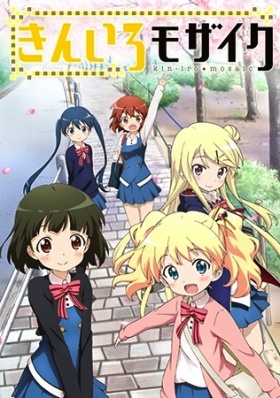 Lena has finally relinquished her power and named me heir to the throne of her beloved blog? Muahaha! Turns out it was just a dream, but here’s a review for you folks anyway.

Story: 6/10
Let’s start things off by examining the crux of the plot, shall we? The story begins with Shinobu Ōmiya, a young Japanese girl, traveling to England for a weeklong homestay with her mother’s friends. It is there she meets Alice Cartalet, a shy girl who’s, initially, reluctant to befriend her. Alice briefly opens up to Shinobu, but little did she know of Shinobu’s obsession with blond-haired girls! After thinking things over, Alice decides to warm up to Shinobu. The girls enjoy themselves and do many activities before their time together comes to an end and Shinobu returns to Japan. Flash-forward several years to when Shinobu receives a surprise when Alice enrolls in her school, speaking fluent Japanese. Alice joins Shinobu’s small group of friends, and the girls begin what promises to be a memorable school year.

The story in Kiniro Mosaic is nothing special. The school life premise has been used countless times by other shows, and Kiniro Mosaic doesn’t do that much to differentiate itself from those shows. That’s not to say that there aren’t any noteworthy moments however, as there are a few of them. The show flexes it’s comedic chops early and often, resulting in a show that should definitely appeal to those who enjoy good situational comedy. For the most part, the show relies on a tried-and-true formula and executes it without any major issues. At the end of the day, it’s the comedy that elevates it to being more than just fluff. There’s enough substance to complement the abundance of style.

Characters: 9/10
While the story may be average, compelling characters help Kiniro Mosaic shine. Each character brings with them loads of personality and adorableness. I mean, just look at the pictures! You just want to do your best Rena Ryuuguu impersonation and take them home! Let’s delve a little deeper and take a closer look at the main cast.

Shinobu Ōmiya: Shino’s fondness for the golden locks of foreigners is one of the reasons that this show is so funny. Subtlety is thrown out the window when her eyes lock-on to her target, yet despite her obsession, she cares deeply for Alice. She and her family house Alice when she comes to stay in Japan. When she’s older, Shino wants to be a interpreter, yet she’s terrible at English. Oh, the irony.

Alice Cartalet: Alice is the diminutive member of the group. She’s surprisingly possessive of Shino and gets jealous when Shino’s paid attention to by others. Alice is also very bright and was childhood friends with Karen, who taught her how to speak Japanese. Reuniting with Shino was a major reason Alice decided to study in Japan. She is currently staying with Shino and her family.

Karen Kujō: Karen happens to be my favorite character. She’s the product of a Japanese father and an British mother, which explains her knowledge of Japanese. She’s very outgoing and carefree, much more so than the other girls. It seems every other sentence out of Karen’s mouth ends in “desu”. While that may sound annoying, to me at least, it comes off as very cute and adds to her charm.

Aya Komichi: Aya is one of the more easygoing characters on the show, but that all changes when Yōko is involved. Aya’s interest in Yōko results in her taking on a tsundere role when interacting with her, most of the time. She sometimes has a hard time expressing herself and wishes she were more like Karen in that regard.

Yōko Inokuma: Yōko is viewed as sort of the big sister of the group, as she was very helpful to both Aya and Shino during their childhood days. She’s oftentimes oblivious to Aya’s apparent interest in her and exhibits the most boyishness of the group. She looks like she could be the long-lost twin sister of Maki from Love Live!.

Animation: 6.5/10
Animation-wise, there isn’t anything in particular that wows you. After all, there’s only so much you can do when a large portion of a show that takes place in a school. That being said, the show has it’s moments where it looks pretty appealing, but these moments don’t happen often enough. It’s very much an average-looking show. Something that does catch your eye, however, is just how cute these characters are. Moe abounds everywhere you look, no doubt turning some people off, while attracting others. I, for one, don’t have a problem with it and even embrace it in this instance, haters be damned.

Sound: 8/10
Both the opening and the ending theme are sung by Rhodanthe*, which is a group formed by the voice actresses of the five main characters. The OP, Jumping!!, is pretty catchy and sets the tone for the show quite well. I didn’t find the ED, Your Voice, to be quite as memorable as the opening, but it’s adequate enough.

There were musical moments late in the series that were fantastic. They vaguely reminded me of songs you would expect to hear from the Disney classics of the past. It was definitely unexpected and a very welcome surprise. Musically, the show saves it’s best for last and ends on a high note, leaving you wanting more.

Yuri: 6/10
There may not be any real yuri in the series, but there’s a good amount of subtext found throughout. It mostly lies in the relationships between Aya and Yōko, and to a lesser degree, Alice and Shino. These girls are very innocent, so anyone hoping for more than just emotions, will be disappointed.

The show strongly implies Aya’s feelings for Yōko, but they end up not being as fleshed out as they could have been. It definitely seems that there’s love forthcoming in their futures once Aya is able to express herself better.

Alice x Shino’s relationship could be viewed as nothing more than a strong friendship, but I like to think that there’s romance bubbling below the surface. Shino’s fascination with blond-haired girls steals the spotlight, but she has strong feelings for Alice, without a doubt. Alice’s feelings led her all the way to Japan, so it’s not out of the question to think that her friendship with Shino is in the process of evolving into something more. Or maybe I’m just reading into things too much, I don’t know.

Total Enjoyment: 8.5/10
Kiniro Mosaic turned out to be one of the most charming and enjoyable slice of life shows I’ve ever seen. The show reminded me a bit of a better, funnier version of Yuru Yuri, which was already a pretty solid show to begin with. Making things even sweeter, is the announcement of a second season. That’s right, more opportunities for Aya x Yōko to officially become a thing, as well as Alice x Shino. Although no timetable for release has been given yet, this is a bright spot on the anime horizon, and yet another show with yuri elements to look forward to.