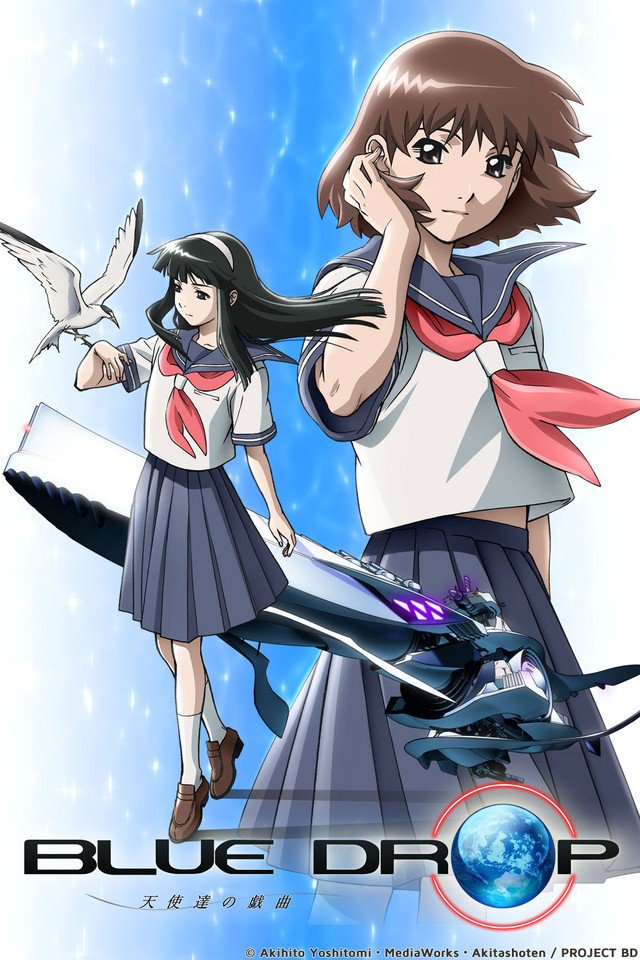 Yet again, it’s time for another guest review. Just like last time, Rock The Vogt will take my place and review a yuri-ish show that I still haven’t come around to watch. Enjoy~

Five years prior to the beginning of the story, a tragedy struck Kamikaku Island that killed all of its residents except one, Mari Wakatake. Fast-forward to 1999, where Mari, suffering from amnesia due to the events of that fateful day, is sent to Kaihō Academy, an all-girls private school, by her ill grandmother. It’s there she meets Hagino Senkōji, the academy’s star pupil, who immediately tries to strangle her when they’re alone together. Holding a newfound grudge against Hagino, Mari incites an incident with her during dinner, losing her dinner privileges in the process. Later that night, Mari sees Senkōji-san sneaking out of the dorms and she decides to follow her. This is the moment where Mari first discovers Hagino’s secret.

The story takes itself pretty seriously and doesn’t feature very much comedy at all. That could definitely turn some people off who prefer lighter fare. Hagino belongs to a species of aliens named Arume. Back on their home planet, only lifeforms similar to Earth’s females exist. Because of this, their future as a species is in jeopardy. Learning of this immediately made me envision a scenario where an army of Arume Natasha Henstridge’s invade Earth and seduce the men, Species-style, thus propagating the species. That’s probably not how it would have went down. Just wishful thinking on my part, I suppose. Anyway, back to the story. There’s some betrayal, deception, revelations… you know, all that good stuff. There are some plot twists that give things an emotional punch and add to the overall investment you have in the characters. The climax definitely happened at the very end and was pretty well done. They saved the best for last, you could say.

The balancing of the school life portions with the sci-fi portions could have been better. The Arume spent a majority of their time just sitting and waiting. I understand they were trying to do the due diligence, but they could have been more proactive with matters. The pacing was a little bit better back at the academy, however. Most of the major characters have their own issues they have to work through, so someone’s usually dealing with something. A more consistent pacing would have improved the flow of the storytelling and made things more tolerable. At the end of the day, Blue Drop is a somewhat campy anime with uneven pacing, but the campiness never approaches ridiculous levels, and the story does smooth itself out later on in the series.

Mari Wakatake: Mari’s the amnesiac who’s the new addition to Kaihō Academy. Having lost her parents as a result of the events at Kamikaku Island, she’s been living with her grandmother ever since. Mari’s attitude changes drastically after that traumatic event. Before, she was a lively and cheerful girl. But after, she’s understandably more withdrawn and reserved. Being the sole survivor of the incident that killed more than 850 people has made Mari a person of interest for Arume and humans alike. Mari’s a fairly likeable character. She’s rebellious and scrappy, yet she’s caring to those who are kind to her. She’s not all that original, but she’s still an okay lead.

Hagino Senkōji: When she’s not busy being the ace student of Kaihō Academy, Hagino, or Ekaril as she’s known to the Arume, is the commander of an Arume battleship called Blue. Hagino is unassuming and the idol of all the girls at the academy. As Ekaril, she’s a more than capable tactician, although she’s been eschewing communication with the Arume ever since the incident on the island. After their first encounter at the academy, Hagino goes out of her way to get closer to Mari. As it turns out, there is more that Mari has yet to learn of Hagino Senkōji. Seeing how Mari was able to humanize Hagino in the grand scheme of things was lovely and inspiring. Love truly is a strange thing.

There are also several other characters with major roles including fellow students, Michiko Kōzuki, Akane Kawashima, and Hiroko Funatsumaru. Michiko is the wallflower that predictably blooms over the course of show. Being neglected in her youth has caused Michiko to turn to writing stories for solace. Akane is tomboy-ish and aspires to be a chef, practicing her craft in the school cafeteria. Last but not least, is Hiroko, the heavyset dorm chief. Hiroko’s the senpai of the group whose wit and wisdom comes in handy when dealing with her younger peers. Although she’s not a student, Yuko Sugawara still deserves mention as well. Mari’s homeroom teacher takes Mari under her wing and their relationship turns maternal to a degree. Despite her sincerity, Yuko may be hiding an ulterior motive to get close to Mari.

The few Arume that play big parts in the story are Tsubael: Ekaril’s right-hand woman, Azanael: an Arume soldier looking to avenge the death of her partner, and Shivariel: the Master Commander of the Arume fleet. Tsubael is Ekaril’s faithful companion. She reports to Ekaril when she’s busy at school and views humans as inferior lifeforms, calling them lazy and fragile. Azanael holds Ekaril responsible for her partner’s death and awaits her opportunity for retaliation. She’s constantly reminiscing about her lost love, which no doubt fuels her rage. Shivariel meets all the prerequisites for a good villain. She’s ruthless, manipulative, and goes to extremes in order to accomplish her goals. Deceitful? Check. Powerful? Check. Overconfident? Check.

The show is 7 years old, so it’s obviously going to look a bit outdated. That being said, even by 2007’s standards, the show is far from a visual tour de force. The characters look bland and don’t stand out that much. Well, their eyes do. I wasn’t a fan of that design choice at all. The 3D modeling done by Gonzo did stand out to me, however. It added some visual flair to a show that desperately needed a shot in the proverbial arm. The battle scenes between the various ships were serviceable and did an adequate job of making things all pretty-like. All in all, average is a pretty good word to use for the animation.

I felt that the overall sound direction was a highlight of the show. Both the OP and the ED, Blue and Tsubomi -blue dreams- respectively, are sung by Suara and are quite soothing. The OP, in particular, is surprisingly beautiful. Have a listen. The background music used throughout the series continued the overarching organic theme of the music. It was subtle, yet effective in contributing to the mood. The voice acting was of a pretty high quality as well. Nothing spectacular, but solid nonetheless.

Blue Drop does have some yuri involved, and it’s not just subtext. Azanael’s angle presents some yuri elements to the show, but given the fact that her partner is deceased, there’s obviously not very much. There are a few hints that Ekaril x Tsubael could have some yuri bubbling below the surface, but Ekaril’s developing relationship with Mari dashes those hopes. The bulk of the yuri hopes lie on the shoulders of the two main characters, Mari and Hagino. Things start badly between them, but things turn around and there’s eventually some handholding and even a kiss to satiate our unquenchable yuri thirst. By the end of the series, they’re essentially a full-on couple. You have to wait a while for things to pick up, but when they finally do, the series ends shortly thereafter. It’s bittersweet to say the least. But I’m an optimist, so I’ll be thankful for what we did end up with, knowing that it could have been even less.

After being urged several times to watch this by a certain female YuriReviewer who shall remain nameless, I finally gave in to her demands. I have to admit, after a few episodes, I was regretting the fact that I started watching it. I didn’t find the sci-fi elements very interesting, and there wasn’t really any yuri. Things slowly turned around, and the yuri eventually came, although more would have definitely been appreciated, especially once you consider some of the events of the manga. Still, the series turned out better than I thought it would, and it might be a decent watch for those who want a splash of yuri in their sci-fi.