WARNING
This post is not going to focus on anything yuri, since I won’t be talking about manga, anime, or anything like that. This time, I just want to talk about something different, so please don’t read this if you’re not interested in what I have to say about the following three shows: Faking it, Carmilla, and The Legend of Korra.

Don’t worry, this is not going to become a regular thing, but since I’m watching all three of them, and since this is more or less a blog about lesbian stuff, I think it’s okay to just talk about a different kind of yuri this time.

But enough with the justifications, let’s start with Carmilla.

This is the most recent show that I started watching, and I simply did so because of all the madness that’s been going on on Tumblr recently.

For anyone that is not familiar with this little web series, here’s my description of it:

Carmilla can pretty much be described as the lesbian, low-budget version of Twilight. The whole action takes place in the same dorm room, presented to us as something like a web diary, done by the main character, Laura, to record all the weird happenings at their university.

It starts out with Laura’s roommate going missing all of a sudden and a mysterious girl named Carmilla being introduced to her as her new roommate.

To be honest, I was not impressed with any of it. The show looks extremely low-budget, the never-changing camera angle bothered me to no end, and the plot… don’t even get me started.

I had to force myself through the first few episodes, but I kind of got used to the setting, the characters, and even the not-so-interesting plot. What really caught my attention however, was the protagonist, Laura. I swear, if they had taken any other girl for the main character, I wouldn’t have bothered watching this at all. Luckily, she’s a real cutie, and the chemistry between her and Carmilla worked out surprisingly well in my eyes.

By the end of the whole thing, I actually surprised myself by being really into it. I was even sad when it all ended.

So to not drag it out any longer, did I enjoy watching Carmilla? Yes, I actually did. I didn’t like any other character except for Laura and Carmilla, but that’s apparently all that is needed to enjoy this little web series. If you have some spare time, why not check it out? The whole thing just ended a few days ago, and you can watch it on this Youtube channel.

Next, let’s come to another lesbian show, Faking it.

Before I give my little review, here’s a plot summary:

The romantic comedy, Faking It, uses a liberal Texas community and a high-school-age cast to present a commentary on sexual orientation, tolerance, and acceptance among young people today. Karma and Amy are inseparable friends who rely on their bond for comfort and support. In fact, they are so close that, after numerous failed attempts to click with the popular crowd, they are outed as lesbians. It’s a big mistake that needs to be corrected — unless it has advantages! For Karma and Amy, being thought of as lovers means instant celebrity among their peers, and there is no way the ruse can end now.

It’s actually funny how this description makes this show sound so much better than it actually is. Well, it really focuses on sexual orientation, acceptance, and tolerance, but as good as this sounds, I think the execution of all of this just isn’t done that well. This still is a typical high school drama that probably focuses more on everyday problems that you might have in high school than problems gay people might have.

Yet again, I’m making it sound as if I hate the show, which is not true. It certainly is stupid in many parts, but all in all, I’m enjoying it. The main character, Amy, is probably one of the main reasons why you should watch the show. The way her feelings towards her best friend are presented to us are both funny, cute, but also tragic, and it’s really entertaining to see how she tries to cope with it. 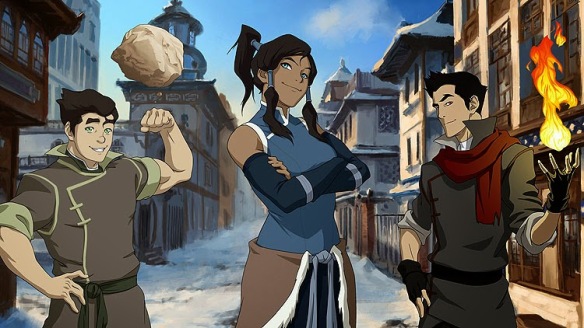 Last but not least, let’s also come to something completely different, namely The Legend of Korra.

Just like in case of Carmilla, this time, it was yet again Tumbler’s fault for getting me interested in the show. I mean, I’ve watched Avatar: The Last Airbender as well, but I wasn’t really planning to continue with The Legend of Korra. Well, until the people on Tumblr convinced me otherwise, that is.

Out of all the three shows I’ve listed in this post, this one is by far my favorite one, yet it’s also the one with the least lesbian action in it. So many times I read about people calling Korra and Asami canon, yet I don’t see any of it, and I have simply no idea why people would even say this. Though, even without it, I still really enjoy it, and it’s probably one of the shows that I’m hooked on the most right now.

And that is why in my eyes, this show deserves a solid 8/10. Maybe the score will get even higher when the final season is over.

47 thoughts on “Let’s Talk About Something Different”