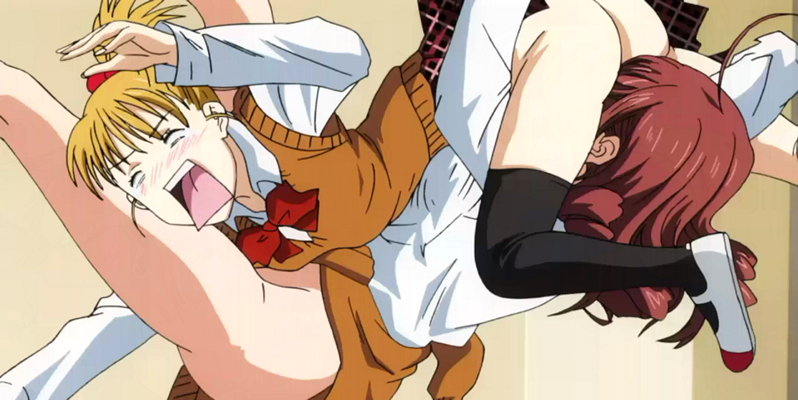 What’s that you say? You’re looking for an anime that deals with contemporary social issues? Well, I’m sorry, you won’t find that here. But what you will find is Gokujo.. It’s juvenile and low-brow, yet it’s amusing in a sophomoric sort of way. Even though Lena has already reviewed the manga, I still felt it necessary enough to take a look at the anime adaptation.

It shouldn’t come as much surprise that there isn’t very much in the way of storyline here. For the sake of brevity, Aya Akabane is an extremely conceited high school girl, and these are her ridiculous adventures. These adventures include everything from replacing the panties that she forgot to wear to school, to competing to see who has the wettest “rafflesia”, which is a well-known sign of an appealing girl (at least it is to Aya). Gokujo. makes no bones about it, it’s very much an ecchi show and it panders to fans who appreciate that sort of thing.

Each episode (sans the OVA) is only about six minutes long, which may be a good thing or bad thing depending on your perspective. For me, a full-length anime would’ve just been overkill and the schtick would’ve tired pretty quickly. There is the feeling that the show tries too hard and forces the comedy, which may turn some people off. I didn’t mind too much and just rolled with the punches.

Every anime aims to have compelling and interesting characters, and Gokujo. succeeds, for the most part. While they may not be the most original characters ever, these girls nevertheless do their part to try and entertain you.

Aya may be the ringleader who calls the shots, but she’s not alone in this sideshow. Her best friend is Konatsu, who’s always the victim of Aya’s rage. But she keeps returning to Aya’s side, just like a victim of Stockholm Syndrome. Ai is the closest thing to a normal girl as there is in this show. She’s soft-spoken and never gets into a bad situation… except when she does. Oowada is the token yuri perv. There was bound to be one, and here she is, folks. I lost count how many times her nose projectile shoots blood and she faints. Utsunomiya is the occult-loving member who’s ready to spring into action with her oddball techniques and rituals. Minamin is the transfer student who becomes Aya’s nemesis, but deep down, Aya harbors a soft spot in her heart for Minamin. Saya is Aya’s abusive older sister, and Oku-sensei is her partner in crime. Oku is also the school nurse, hence the sensei moniker.

From a visual standpoint, there isn’t much that catches your attention, except for one thing… Aya’s hilarious facial expressions. It doesn’t matter if Aya is happy, sad, angry, or whatever, she always comes up with an appropriately funny look on her face that helps to make up for some of the show’s other shortcomings. To demonstrate my point, I took the liberty of gathering some of my favorite faces that Aya makes and put together a little photo gallery. Take a look.

Since Gokujo. is a short-form anime, it only makes sense that both the OP & ED are shorter than the minute and a half versions of standard anime. Neither one did all that much for me, and I didn’t find myself compelled to keep hearing them before and after each and every episode. In spite of the somewhat mediocre music, the solid performances of the voice actors help Gokujo. stay just about average in terms of audio quality.

Like the rest of the show, subtlety isn’t present in the yuri elements of the show either. During the course of the 12 episodes, there’s the fanservice that one would expect from a show like this, but nothing that would be considered more serious or meaningful. There are allusions here or there, but nothing with any weight behind it. There is a moment (during the OVA), where a relationship is consummated, although calling it a relationship is probably a stretch. Still, it’s more than I expected, which is odd given the personalities of some of the girls, but whatever. Even though some of the more yuri-ish moments were surely done for the sake of comedy, I still enjoyed what was present, regardless if it felt tacked on or not.

Gokujo.‘s lack of any substantial depth definitely hurts it’s overall appeal, but it’s still an amusing and unapologetic romp, albeit one that takes place in the shallow end of the pool. The comedy involved may not be up everyone’s alley, but I can think of worse ways to spend six minutes than with a date with Aya and company.