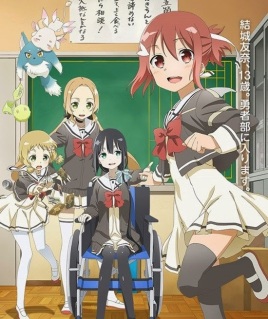 This anime review is brought to you by the many persistent YuriReviews readers who spammed me about this anime long enough for me to finally start watching it. Thanks, I really needed that. 😛

Story: 7.5/10 and Characters: 10/10
Yuuki Yuuna wa Yuusha de Aru is yet another of the numerous Magical Girls anime that so many people love, yet, it’s a little different than most of its kind.

The story starts out with the introduction of the “Hero Club”, a school club consisting of 4 girls that dedicate their time to helping out others. However, their clubs’ purpose suddenly changes when they get caught in a ray of light that transports them into what seems to be another dimension. There, they have to fight the 12 Vertex, creatures that threaten the world by attacking the Shinju (Tree of Life) that is necessary to keep our world intact.

In order to fight these creatures they get divine powers granted from the Shinju (their god) that only a selected few can use. To be completely honest, I still don’t get in what kind of world this anime takes place. They often pray to the Shinju, which appears to be their god. Though, the anime doesn’t really explain all of this too well, so I guess you need some background knowledge from the Light Novels this anime is based on to really understand what is going on.

Still, let’s not be bothered by this and move on to the characters. We are introduced to 5 “Heroes”, Yuuna, Mimori, Fu, Itsuki, and later on also Karin, who initially joins the club to check whether the girls are doing their job properly. As I said many times before, it doesn’t happen too often that I really find the whole cast of a show enjoyable, though YuYuYu, as fans call it, delivers exactly what I want to see when it comes to the characters and their relations.

I loved all 5 girls, and I especially loved the way they all interacted with each other. It’s not about the different kinds of character this time. Despite the fact that they all have different and interesting personalities, the reason for this rating to be so high is rather how fantastically well these girls work out with each other. Their friendship comes off as strong, and it’s not just thanks to how they interact and protect each other during battles. The girls act like total dorks around each other, and I think that this is one of the most charming aspects of the whole anime.

I really enjoyed watching their relationships, which made the few really peaceful and fun episodes the most enjoyable ones of the whole anime for me. Though, and I think that this needs to be said, Mimori was my favorite girl~

As mentioned above, YuYuYu is a magical girl show that doesn’t really fit in with most of its kind. Many people compared it to the Madoka series and I can definitely see why. It shows the genre from a very dark and tragic perspective, shocking most of its viewers when the truth is finally revealed.

This already makes it sound a lot like Madoka Magica, though it’s definitely not as dark and devastating, which I found fortunate, since I couldn’t handle another story like that. However, I really enjoyed the main problem, their struggling and especially how all the events eventually influenced the girls mentally as well. To sum it up, the story isn’t explained completely, making it a little hard for those of us who haven’t read the Light Novels to understand what exactly is going on.

There are even a few explanations missing, especially when it comes to Togo’s backstory, and I found that immensely unsatisfying. However, despite the fact that some story parts are missing, I enjoyed watching this show a lot. The cast is simply awesome and I’d watch any show if it just had a set of characters like these.

Music: 7/10 and Animation: 7.5/10
Nothing outstanding in both categories. The music is decent, fitting in all situations, but just not remarkable enough to stand out in any kind of way. The same goes for the animation. It looks good, there’s no doubt about it, but that’s it.

Yuri: 4/10 – Obvious Yuri Subtext
Mimori x Yuuki is a pairing I’ll probably follow for a looong time from now on. They were absolutely amazing together and they kind of reminded me of Homura and Madoka a lot. If the anime couldn’t convince you of the awesomeness of this pairing, let me help you out a little by showing you a scene that happens in the official visual novel.

The girl commenting to all of this is Yuuki’s voice actress. Pay close attention to her reactions as well. 😛

Now, all we can do now, is wait for some awesome artists to pick up this pairing!

Total Enjoyment: 8/10
I don’t know just how many people had to force me to watch YuYuYu, but I was basically confronted with this on the blog, on Twitter and even offline by certain friends. But now that I have finally watched it, was it all worth it? Yes it definitely was and I thank all the people who were persistent enough to bug me as much as they did!

Well, it is certainly not the masterpiece that some people made me think it is, but it was definitely one of the greatest shows the past season had to offer, and that is a big achievement!