Serving as a pseudo-sequel to the 2008 Wii visual novel 428: Fuusa Sareta Shibuya de, Canaan proves to be all about the ladies. The four male characters with important roles in the story are all neutered in their ability to kick ass compared to their female counterparts, which is entertaining to see. For a show that prominently features the fairer sex, there certainly isn’t any skimping on the action. Far from it. It’s all there (and superb), and even brings with it a welcome guest, shades of yuri.

After losing her family at a young age in the war-torn Middle East, a young girl is taken in, given the name Canaan, and raised as a child soldier. Canaan has been gifted with synesthesia, the ability to see objects in colors that associate with different meanings (For example, blue is associated with deadly intentions.). Canaan uses this ability to its fullest, helping her to become an even more efficient soldier. Following a mission that saw her mentor get murdered, Canaan seeks retribution against the person responsible. That person goes by the name of Alphard. She’s the head of a terrorist group called “Snake”, and prior to her betrayal, she served as an apprentice under the same mentor as Canaan. On their way to Shanghai are two journalists, Maria Oosawa—who happens to be a Yuri Anime Legend—and Minoru Minorikawa, that get swept up in the chaos involving Canaan and Alphard. Two years prior to the events of the series, Maria was abducted and forcibly infected with the Ua virus, a deadly virus that is said to have a 100% mortality rate. Thanks to the efforts of her pharmaceutical magnate father, Maria survives the attack, although she has no recollection of this event. Snake’s desire to fan the flames of disorder leads to the organization becoming a thorn in the side of the free world. When Snake starts playing around with biological weapons, you just know things are about to take a turn for the worse….

For the most part, the story doesn’t get too cheesy and remains compelling throughout the course of the thirteen episodes. The bioterror angle is interesting and gets more intriguing when more info on the “Borners” and “Unbloom” comes to light. The series delves into Canaan’s backstory a bit, but it would have been great to have explored Alphard’s past as well. Seeing things from her perspective would’ve gone a long way towards understanding her motivations better. By the end of the series, things sort themselves out adequately, and you’re left with few questions regarding the fate of the main cast. It’s not Shakespeare by any stretch of the imagination, but the story doesn’t drag the rest of the series into the depths of mediocrity either, so muted applause is in order.

Canaan benefits greatly by having some pretty good characters. Enough has probably already been said of Canaan, so let’s move on to the others. Maria is a bubbly camerawoman who is accompanying Mino to Shanghai. Her ongoing friendship with Canaan, as well as her complicated past, both play vital roles in the narrative. Speaking of Mino, he’s a lowly reporter who’s seeking a big scoop in Shanghai in order to advance his stagnant career.

Like Canaan, Alphard is also a mercenary, as well as Canaan’s powerful nemesis. Despite lacking Canaan’s synesthesia ability, Alphard is still capable of punishing Canaan, and she toys with her like a cat playing with a mouse. There’s also the Yuri Award winner and Yuri Anime Legend herself, Liang Qi. If Yuno from Mirai Nikki had an overly obsessive older sister, she’d be Liang Qi. For a yandere, there can be no greater compliment than to be compared to the reigning queen, but Liang Qi respectably holds her own in comparison. Then there’s Yunyun. She’s the series’ main source of comic relief. When matters start getting too heavy, Yunyun oftentimes comes along and delivers a swift kick to your funny bone. It’s very effective.

Seeing the character development of Canaan over the course of the series was gratifying. You don’t go from orphan to professional killing machine without having some serious ghosts that are haunting you. The guilt of her past actions comes bubbling to the surface and takes a toll on her, despite how well she hides it. It would have been all too easy to portray her as a heartless robot, but Maria had it right all along… Canaan really is a just normal girl.

Despite being over 5 years old now, Canaan still holds up pretty well from a visual standpoint. The action scenes in particular are impressive, showcasing some sweet gunplay and hand-to-hand combat. There isn’t too much fanservice thanks to all the shooting and dying, but the majority of what service there is comes from Liang Qi (huge surprise, huh?). A lot of things can change in five years, but nobody told that to those responsible for this series. Like a fine wine, it’s aged gracefully, so let’s toast to another five years of continued beauty.

The OP “mind as Judgment” is fantastic and sets the tone for the thrill ride that is about to ensue. While the OP is an adrenaline-pumping song that gets the show started off with a bang, the ED “My heaven” is the polar opposite. Beautifully tragic, it serves as a fine swan song for each episode—except the final one—and is a nice change of pace. For me, it was a bit of a grower, but I definitely appreciate it more now than I did initially. It may not be as memorable as the OP, but it’s still a quality track nonetheless. The background music is equally well done and adds a great deal to the show’s atmosphere and mood. Voice acting is yet another instance in where Canaan shines. Miyuku Sawashiro even took home the Best Leading Actress Award at the 4th annual Seiyu Awards for her role as Canaan. Across the board, Canaan has some stellar audio production that definitely makes the viewing experience all the better for it. 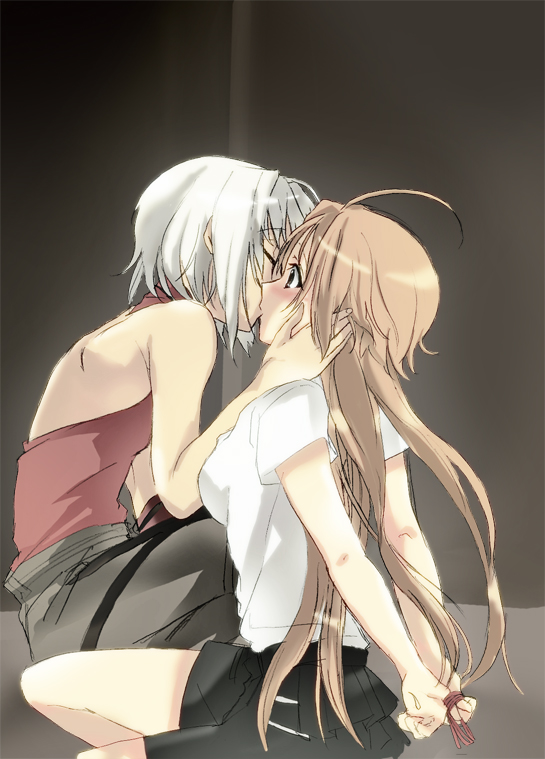 Cat’s cradle. Canaan is an expert at it.

For being such a straight-forward action show, Canaan has a surprising amount of yuri. Canaan and Maria are the focal point here, and they do their best to make the pairing as close to canon as possible, but they sadly fall short. That said, your yuri goggles won’t require much of a workout to see their affection for one another, as it’s overwhelmingly obvious (and lovely). On the flip side, there’s the odd couple pairing of Alphard and her “sister”, Liang Qi. You might as well just throw the yuri goggles in the closet at this point, because they’re not really needed with these two. Blinded by her twisted love for her nee-sama, Liang Qi goes to extremes in order to catch Alphard’s eye, but Alphard isn’t having any of it. Who would’ve thought that Alphard would not find Liang Qi’s brand of batshit crazyness attractive?!?! Shocking, I know…. Even though it’s not really explored much, if at all, Canaan x Alphard would make the most dynamite pairing possible. Then again, I’m not sure the yurisphere would be able to withstand that level of sexiness, so that dream pairing may forever be nothing more than a pipe dream. Oh well, at least we’ll still have Canaan x Maria to comfort us.

For what initially seemed to be just another action series, Canaan surpassed expectations and delivered a pleasant dose of action with a side of yuri for good measure. High production values, an entertaining story, and a modest helping of yuri all combine to make the series a highly enjoyable one that should satiate fans who prefer their yuri a little more explosive.