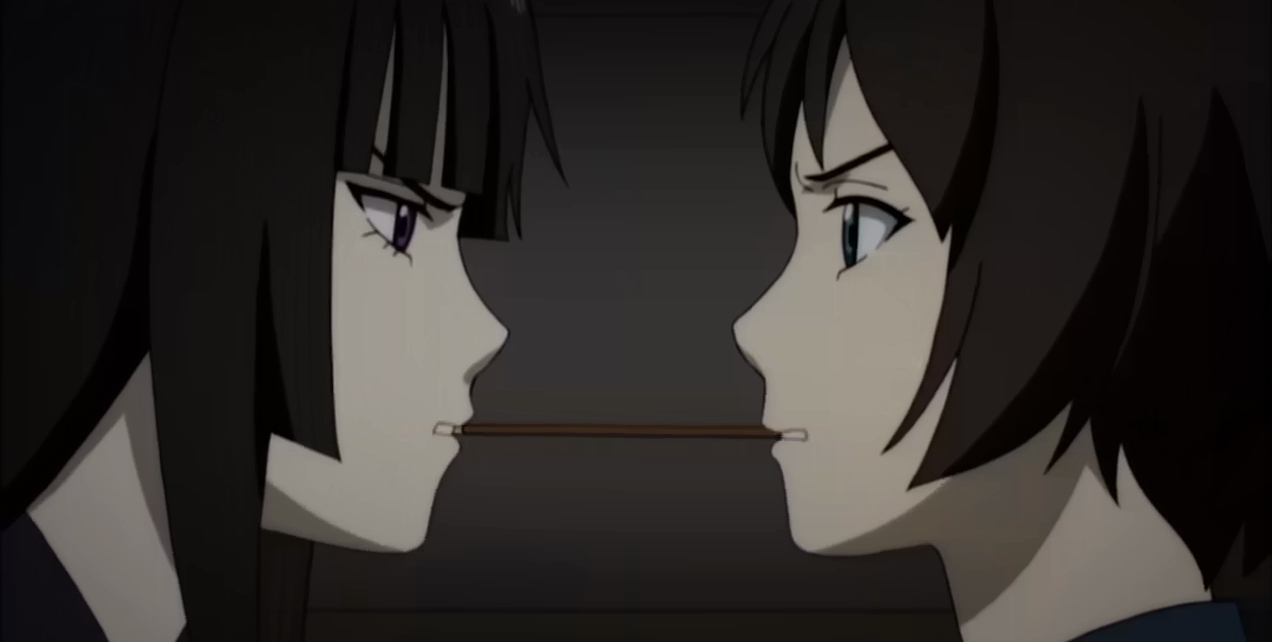 ♫If there’s somethin’ strange in your neighborhood, who you gonna call?♫

No, not Ghostbusters, you’d call Yomi and her squad of exorcists. Taking a more brutal approach to the paranormal investigation genre, Ga-Rei: Zero drops you into a world where, when supernatural forces materialize, they’re usually dealt with ruthlessly and quickly. Although that may not sound like prime yuri material, at the heart of the story is the relationship between Yomi and Kagura. Sweet, sympathetic, and satisfying, that relationship helps GRZ become a series that delivers more than was initially anticipated.

After the death of her mother at the hands of a specter, Kagura Tsuchimiya is brought to live with Yomi Isayama and her father, while her own father assumes the responsibility of becoming the 27th warrior of the Tsuchimiya family. Along with that title comes the Ga-Rei, Byakuei, the most powerful of the sacred beasts. One day, Kagura is due to inherit it as well. Despite being adopted following the death of her parents, Yomi is set to become the head of her family as well, and with it, wield the priceless sword, Shishiou. In an attempt to deepen the relationship with her relatives, Yomi is part of an arranged marriage to Noriyuki, a fellow member of the Agency for Supernatural Disaster Prevention. When supernatural disturbances are detected and specters of all shapes and sizes appear, the agency sends out their disposal team to exorcise and vanquish the threat(s). Kagura eventually joins Yomi and the rest of the team, helping the cause.

The immeasurable power of a mysterious artifact known as the Death Stone attracts evil spirits like flies to honey, making things difficult for the agency. It also leaves them scratching their heads, as they’re unable to determine the cause of the spiritual disturbances. Even though Kagura’s father houses a small fragment of the Death Stone needed to help control Byakuei, there exists a much more potent version out there somewhere. 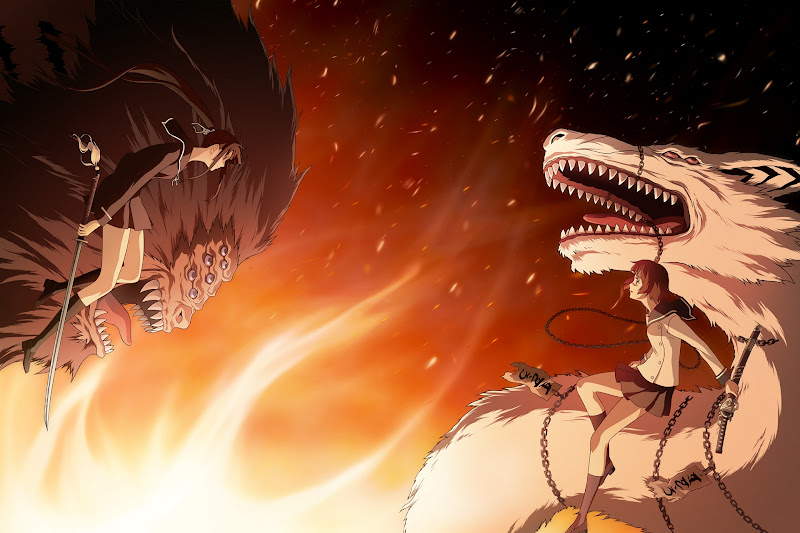 If you’re mentioning Ga-Rei: Zero, you have to use this pic. It’s the law.

Alright, so the story has some clichés, and an important character doesn’t even have a proper conclusion to their story, but things are so damn entertaining that I don’t even mind that much. There’s tons of action, some comedy, deceit, tragedy, and even some brief nudity. What’s not to like?!?! Also of note is how the series starts off towards the latter portion of the story and then retraces its steps, showing how things got to that point. Personally, I didn’t have a problem with it, but some people might view it as an unnecessary spoiler. To each their own, I suppose. You don’t see that literary technique used often in anime, so it’s surprising to see it make an appearance here. Nevertheless, the story is captivating and makes you want to see things through to the end.

There’s no shortage of interesting characters in Ga-Rei: Zero, but the most interesting by far is Yomi. She’s a sexy, death-dealing badass who has much more personality than Kagura—who’s rather bland in comparison, by the way—and her story elicits more reaction as well. I should probably also mention that she’s a Yuri Anime Legend, so that’s further proof of her awesomeness. Kagura, meanwhile, is more of an everyday teenager who’s been predestined to lead a challenging life. She’s skillful too (moreso than Yomi, actually), but her compassion is what sets her apart from Yomi.

Aside from those two, there are several others that make watching the show enjoyable. There’s Tsuchimiya-dono, Kagura’s dad and the current holder of Byakuei. Yomi’s beautiful yet suspicious, cousin Mei. Yomi’s betrothed, Nori, who’s a bit of a womanizer. The mohawked member of the agency who swings the other way, Iwahata. Kazuki, another member of the agency, dual-wields suitcases filled with fully-automatic artillery. The Nabuu twins whose personalities are as identical as their looks. Ayame, the Minister of the Environment who is wheelchair-bound, and her loyal assistant, Kiri. The eccentric (and nearly naked) swordsmith Master Michael. And there’s also another character that’s very easy to hate, but I won’t spend much time on him. All in all, I think that’s a pretty well-rounded stable of characters, if I do say so myself. 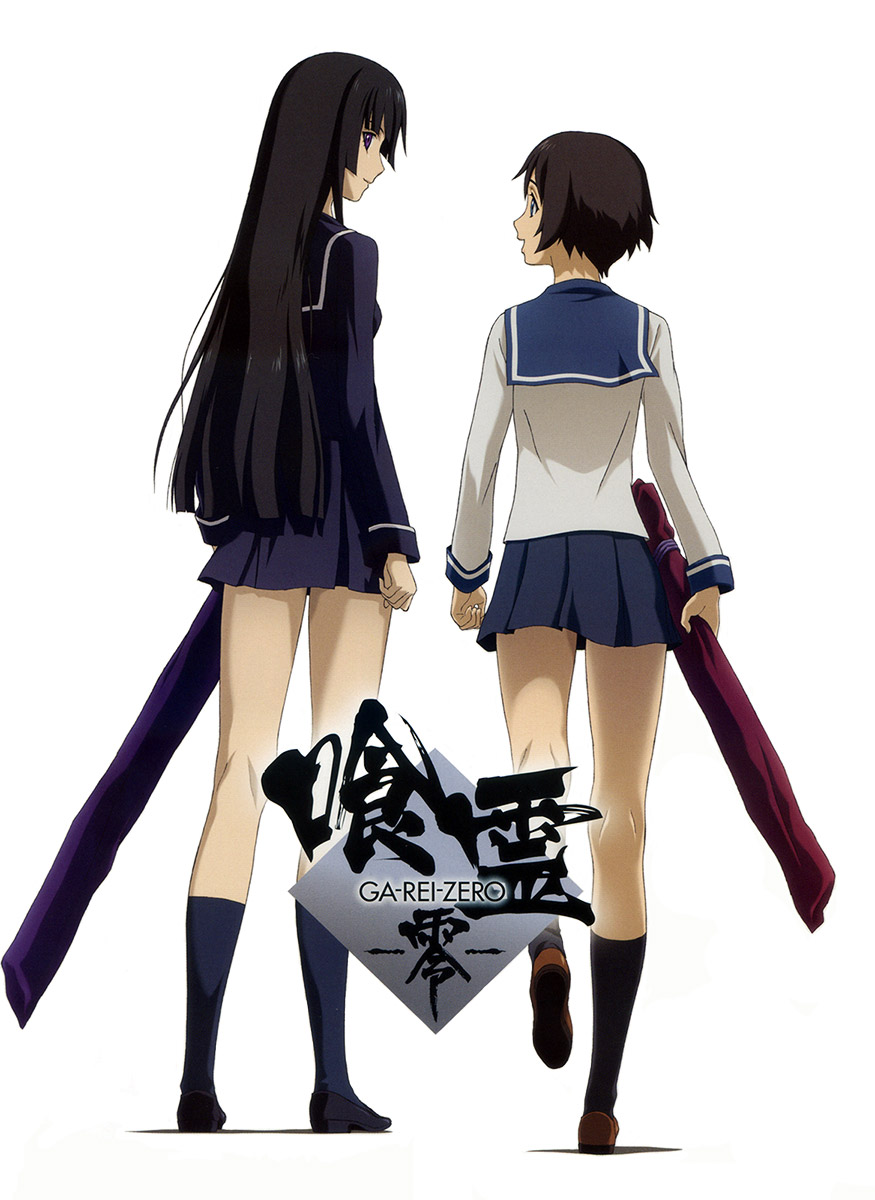 From the very first episode, you’re treated to Ga-Rei: Zero‘s brand of hyper-violence. With severed limbs, impalement, and decapitation, the series is probably harsher than a lot of yuri fans are accustomed to, but that doesn’t take away from the fact that the series still manages to look good, despite it airing in 2008. The character designs are great, with even the sacred beasts like Ranguren, looking epic. The 3D animation that is occasionally used is an otherwise lone exception to the rule, but it’s not used frequently enough to make a major difference.

Some people feel that sound is nearly half of the viewing experience, and if that’s the case, they’ll likely find yet another reason to like Ga-Rei: Zero. Despite their differences, the OP “Paradise Lost” and the ED “Yume no Ashioto ga Kikoeru” both make a positive impression. Whether it’s the driving beat and smooth vocals sung by Kagura’s seiyuu in the former, or the solemness and sorrow sung by Yomi’s seiyuu in the latter, the show begins and ends in style. If you still weren’t convinced, the OP even features some sweet moments between Kagura and Yomi, which makes a good thing even better. Something else that should be mentioned is the background music. It doesn’t matter if it’s an intense action scene, a grief-filled scene, or anything in between, the stellar background music helps make these moments more impactful.

If you like Ga-Rei: Zero, you have to like Yomi x Kagura. It’s really as simple as that. I suppose if Kagura x Yomi aren’t your cup of tea that you could try shipping Ayame x Kiri, but this series is almost exclusively about Kagura x Yomi, so let’s get back to them. Amidst all the paranormal activity, their relationship is what puts the show on the yuri map and often gives it a more delicate vibe. There are adorable moments, like when the girls are able to act like ordinary teenagers, and some heartbreaking moments too. They’re just like sisters who’ve shared the same cruel upbringing (both having lost a parent, or in Yomi’s case, both). Being the older of the two, Yomi wants to protect Kagura as she settles into the life of an exorcist, keeping in mind she has a date with destiny as the future bearer of Byakuei. There’s enough subtext to indicate that there could be a little more to their relationship than just sisterly-type love, but the series teases and leaves you wanting more. Sadly, as much as most fans of the series would love to see more from Kagura x Yomi, other than a brief cameo they made in Tokyo ESP, it’s unlikely that lovers of this pairing will get to see them share the small screen again, despite the lack of total conclusion.

A dark and violent tale of destiny and tragedy, Ga-Rei: Zero gives yuri fans a reason to be interested thanks to the underlying relationship between Kagura and Yomi. It’s sometimes touching, sometimes intense, but throughout, it’s extremely enjoyable and something of a rare breed in the yuri spectrum. Great action, fantastic music, and an entertaining story are just the
cherries on top to make this more than worth peoples time, in my opinion. 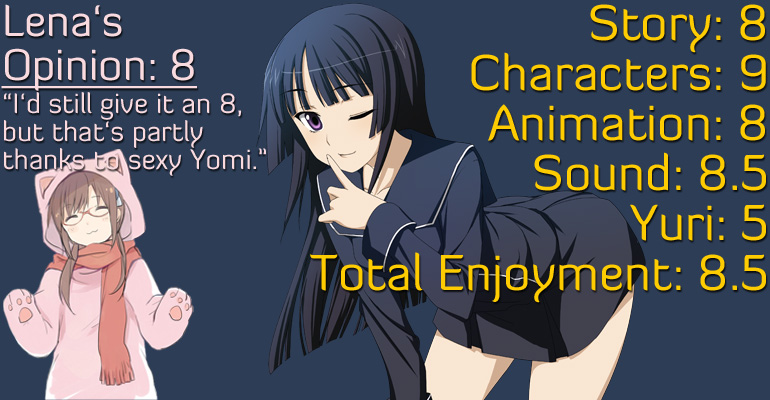