This time, we have our first guest review by FoxyLadyAyame! Feel free to check out her blog as well~ 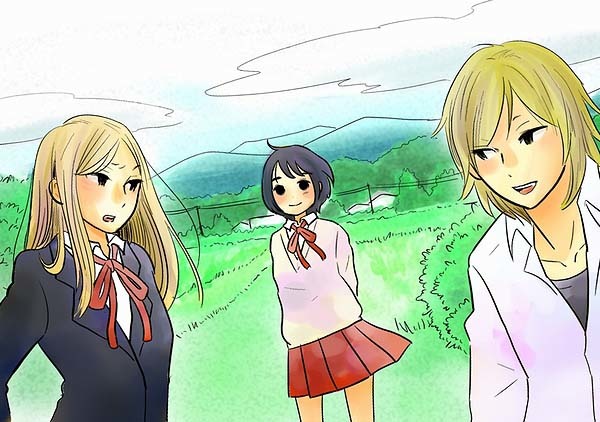 You can also read the first 36 pages for free.

From hereafter, there are spoilers. If you want to avoid them, skip to the bottom of the post.

Story: 8/10
Sumika was just a kindergartner when her father, whom she loved and created stories with, committed suicide. Thankfully, she doesn’t get lonely because her cousins keep her company and move not too far away from her own house. Fast-forward to the present, and their carefree days are bygone. They ask each other what their plans for the future are, and no one seems sure, but Chinatsu would like to follow Sumika. Akio, in contrast to his studious sister, sleeps around and doesn’t care about school much. Sumika’s only two steady things in her life are her “hobby” of peeping on Akio with her binoculars and drawing him into BL situations with his close friend, Kimura. Perhaps she’ll get a recommendation to enter an art academy.

As Sumika talks with Akio about her plans, Akio tells her he wants to change and asks her out, feeling as though he’s safe with her. They start dating and have sex, but there’s this itching feeling something is wrong. During a summer festival, Sumika has an eye-opener that Akio cares only for one person, Kimura. She decides to show him her drawings, and it finally dawns on Akio what’s been in his soul this whole time. They break up, and for a long time, they stop communicating. Akio even closes his room’s curtains. Sumika later admits to Chinatsu that deep down she knew it wouldn’t work, and it was probably why they got together in the first place.

In the meantime, Sumika spends more time with Chinatsu. They go mountain climbing on Unebi to gaze at the city and have a picnic. Chinatsu kisses Sumika and confesses, showing that she’s hurt. Sumika didn’t notice anything, but she knows all she had on her mind was Akio. She doesn’t ask anything in return and everyday life continues. Sumika decides she won’t apply to any university. Chinatsu is oriented towards the exams, and Akio finds the courage to tell Kimura about his feelings. The students and neighbors gossip about these two, and Akio drops out of school.

Sumika becomes very worried about Akio. One day, she remembers in her sleep that her father hung himself (something she has long suppressed), and wakes up panicked and rushes to Akio’s house to make sure he’s alright. The three of them take a walk outside and lay on the ground to stargaze and talk about the past and the future. Akio then announces to them that he’s leaving for Tokyo, and the next day, they say their goodbyes. After a while, it’s time for Chinatsu’s exams, and Sumika decides she needs to start drawing again.

Chinatsu gets into the university she wants, and the graduation ceremony is coming up soon… without Akio. The two girls go for one last walk together, and their feelings haven’t changed. Chinatsu tries to be brave, but Sumika catches her crying when she goes to return something Chinatsu had forgotten. They’ll meet again—that’s the promise—and they’ll laugh together. Sumika strives to become a mangaka like her father, but without success thus far and with many questions hanging over her head.

Sumika gets to meet Chinatsu again shortly, now a med student, and gets news that Akio works at a host club and is doing well. Sumika misses them both terribly and feels guilty for being what she perceives as selfish. She holds out hope that one day, she’ll meet them again.

It isn’t an overly complicated story, but Fumi-sensei knew how to tell it both through round characters and through great visual narrative. The fact that it’s difficult to separate the visual from the written storytelling just attests to the manga’s craft. Because that’s exactly what this medium is about. I’m only vaguely splitting them for the sake of this review.

In just a single volume, Fumi-sensei manages to flesh out the three protagonists in ways that other mangaka need volumes to do, in order to smoothly go from one state of mind to another. She uses small bits of foreshadowing to achieve this result. Sumika appears cute, straightforward, and rather naïve; Chinatsu looks like your typical distant beauty; and Akio resembles the archetypal brooding bishounen who’s popular with the girls. But Sumika is also a peeping tom, a fujoshi, and someone who can say ugly things when she’s upset. Chinatsu gets very sweet and deeply sad when it comes to her love for Sumika, and Akio may have been in denial of his queerness for a long time, but he musters the courage to come out and get away from an environment that’s suffocating for him.

Talking about the environment, Nara is Fumi’s birthplace, and she’s stated in an interview that the setting is somehow a character of its own. Nara is surrounded by mountains and has lots of nature, creating a “closed space” unwelcoming to the childrens’ differences. The thick foliage of the trees is also used metaphorically as obscuring Chinatsu’s and Akio’s true selves. The myth of Yamato Sanzan is mentioned as well, and mirrors both the childrens’ love triangle and their queerness, since the mountains weren’t gendered in poetry. (Chinatsu presents herself kind of butch in the last chapter, and Akio has a feminine beauty)

Back to the kids, the names themselves are carriers of meaning that, when combined with chapter names, make for an interesting reveal. Chinatsu means “thousand summers”, but the chapter dedicated to her corresponds with autumn. Akio means glorious man, but the first part of the name, Aki, sounds the same as the Japanese word for autumn. And yet his chapter responds to summer. I think this is intended to show how the twins have things in common despite not talking to each other much and that they’re more than they appear. Sumika means house, and she’s the only one staying in her hometown.

Art: 7/10
I’ll start with the cover. It uses pink, green, gray, and white in a very charming way; and every line is in gloss, which gives a very cute and pleasing first impression. It features the main three protagonists standing next to each other and the landscape of Nara, communicating the two important factors of the story. It’s noteworthy that they don’t hold hands or share feelings in any way, making us think about their relationship.

The book is organized into five chapters, one for each season, and the last goes back to spring for a circular closure. I really appreciate how characters are distributed in these pictures to reflect their relationship every given period. Spring has Sumika at the center, between Chinatsu and Akio at equal distance from each, and everyone looks at the reader. There are very few clouds in the sky. Summer has Sumika right next to Akio, and Chinatsu is opposite of them as Sumika and Akio are in relationship. It’s night and the sky is very cloudy.

Autumn has Akio behind the girls (since Sumika now spends most of her time with Chinatsu), and you can barely see the sky behind the clouds. And finally, winter has the trio in a similar configuration as spring. They play with the snow, but we can’t see the sky. Snow is everywhere, and we look at them from above. At this point of the story, everyone has shown their true selves and are open with one another. They share their last moments together and reminisce of the past.

The content within is drawn in clear bold lines, and most of the time, there’s minimal noise behind them. There are chunks of solid black here and there, perhaps with one or two characters, which are aptly used for dramatic effect. The simplicity of the majority of the manga doesn’t mean that Fumi is lazy or can’t draw. We also see certain pages full of details, so we can safely say minimalism is her artistic choice to get across a certain atmosphere. Additionally, the layouts have a good flow and a good composition. For example, when Akio walks with Sumika after his confession, there are a lot of clouds and long thin panels creating a foreboding feeling, like something’s hanging over their heads.

Yuri: 7/10
Chinatsu kisses Sumika and tells her that she loves her. Nothing really happens, so I’m hesitant of rating this that high, but at least her love isn’t seen as abnormal. And we don’t have that “But we’re both girls!” nonsense. Sumika typically gets flustered later when she takes the time to appreciate how pretty her friend is, but Chinatsu doesn’t have any expectations. She reminds me a bit Tomoyo from Cardcaptor Sakura. If you came into this series for idealized romance, by now it should be obvious… that’s not what you get. Not everyone has a happy ending in the love department, not even the heterosexual heroine. It’s nevertheless a good LGBTQ manga.

Total Enjoyment: 8/10
At first, I was hesitant due to the price (14 Euro) and the absence of backgrounds in many pages, but Fumi-sensei didn’t disappoint. It’s one of the best one-shots I’ve ever read. I can recommend it to anyone who appreciates down-to-earth LGBTQ stories. If you’ve come for action, fanservice, or a cute love story, then this book isn’t for you.