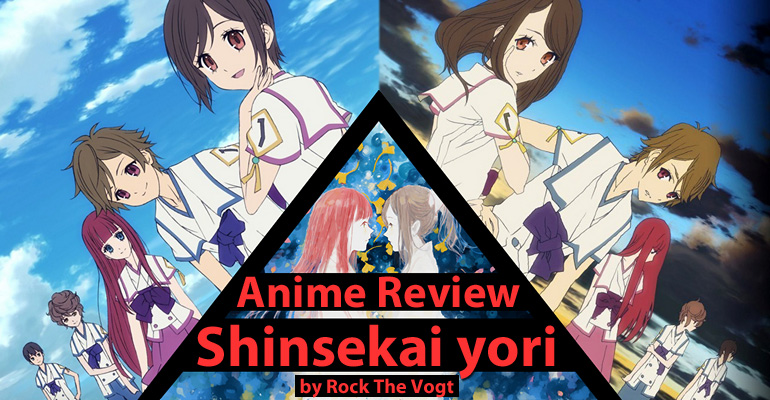 Shinsekai yori is making its long overdue appearance on the blog. Originally a Nihon SF Taisho award-winning novel (which is given to outstanding Japanese science-fiction works, regardless of medium), the anime adaptation arrived with already lofty expectations. Does it make a successful jump to the small screen? I’m happy to say that the expectations are met, and I’ll do my best to keep things spoiler-free.

One thousand years from now, the world has drastically changed. The emergence of psychokinesis has fundamentally changed how society operates. After a child gains access to their psychokinetic powers, they’re sent to an academy in order to hone and further develop their skills. While everything may seem calm and idyllic on the surface, mysterious disappearances and rumors of a giant cat who abducts children suggest that there may be much more going on than anyone is willing to publicly admit….

From the very first scene, things take a dramatic (and violent) turn, and it’s hard not to instantly be intrigued by the series. The subsequent twists, turns, and revelations only serve to solidify the fact that the plot is rich and rewarding for those that pay attention. There are times where the story can be a little difficult to digest—a few prolonged stretches of exposition prove to be a major culprit—but these moments don’t prove too problematic. Conversely, they are something that fills the void left from the missing millennium and provides fascinating insight on what transpired during all that lost time. Some topics that are dabbled into include ethics, metaphysics, and genocide, so depth is something that the narrative certainly isn’t lacking. What’s great are how these topics are weaved in a way that’s fairly understandable (the metaphysical aspects admittedly less so) and extremely engaging.

Pacing is brisk, for the most part, with nearly every episode ending in a fashion that makes it difficult to stop watching, and the violence on display can be viewed as essential to help move the plot forward. In conclusion, the story is well thought out, and when all is said and done, the various mysteries pretty much all sort themselves out. When I finally completed it, I wanted to go back and rewatch it, just so I could see things from a slightly different perspective. If that’s not a sign of good storytelling, then I don’t know what is.

From main characters like Saki and Maria, to supporting characters like Squealer and Kiroumaru, there are several characters that leave their mark on the series. The show does a good job of building up the characters, so when bad things happen—and they will happen—there’s a good chance that some feels will be felt. Becoming attached to the characters is easy, and even characters whose actions you might not agree with, you can at least understand their motivations and reasons for acting/responding in a certain manner. Even some of the characters that aren’t that great *cough*Mamoru*cough* have their charms about them and aren’t a complete loss. In short, the characters are interesting, relatable, and you’re given more than enough reason to care about their exploits.

Shinsekai yori is at its best-looking when scenes head outdoors and we’re given an eyeful of gorgeous landscapes and vistas. Where it’s at its worst is definitely with the use of 3D. It’s used on occasion, and like most other times that 3D is used in anime, it’s definitely not flattering and just looks awkward most of the time. The characters themselves look nice and detailed, although shading is minimal, resulting in a rather bland look. Nevertheless, the visuals look good, and there’s plenty of eye candy on hand to visually feast on.

Like nearly all 2-cour series, there are 2 EDs, but there strangely isn’t a single OP to speak of. The first of these EDs “Wareta Ringo” features Saki’s seiyuu and was my personal favorite of the two. The second, “Yuki ni Saku Hana” is sung by Maria’s seiyuu (HanaKana!!!) and is more poignant and relevant to the story. Honestly, I didn’t really love either one, but I found the first to be more memorable, and I didn’t skip past it nearly as much as I did the second one. The themes were good, but for me, the best aspect of the audio was the background music. The BGM adds a great deal of immersion, making the foreboding nature of the series even more tense and palpable. High production values across the board prove to be yet another feather in Shinsekai yori‘s cap.

First off, if you’re going by the patented YR yuri rating system dubbed “YuRi-Vision™” (← I totally just made that name up.), then the yuri score is technically correct. But in actuality, I don’t really think it’s deserving of a score quite that high. Yes, Saki and Maria become lovers, but I don’t think their relationship is given the necessary focus to warrant that score, especially considering that there are 25 episodes. The problem isn’t the quality, but the quantity. It also bears mentioning that during the most yuri-centric episode, you’re also served a helping of BL alongside it. Talk about a buzzkill…. If I were to disregard YuRi-Vision™, I think I’d give the yuriness more like a 6 or so. That seems pretty fair to me.

The antithesis of the fluffy kind of shows that yuri usually inundates; Shinsekai yori has the substance, the style, and a canon yuri pairing to help give yuri fans a break from the usual assortment of magical girls, pop idols, and unassuming schoolgirls that have become associated with the genre.