Similar to Inugami-san to Nekoyama-san by the same artist, I think LOVE/DEATH would make an even better short anime than the former.

Well, it wouldn’t be some random comedy mixed with yuri. This time, it would be a mix between yuri, action, and comedy; and I think that’s a pretty nice combination.

You all saw it coming, didn’t you?

Ever since that Mai x Reo OVA was released, I’ve been eagerly waiting for another episode to finally appear. So far, we’ve “only” gotten some more SonoHana visual novels, which is already pretty awesome, but I still can’t help it. I want this to have an anime adaptation, and I want it pretty badly.

Be it with or without the numerous sex scenes, this manga would surely make a great yuri anime! It shows a more mature approach on a yuri love story, with one of the girls (Setsuko) being one of the most gorgeous yuri characters of all-time.

Also, we should not forget that this manga is loved by fans from all over the world. So what other reasons do I need to list to be able to demand an anime adaptation? None!

On a side note, I’d prefer this to get a NSFW anime adaptation…. What a surprise. 😛

6. The Feelings We All Must Endure by Amano Shuninta

Many people hated it, others loved it. For me, this was one of the greatest manga I’ve read this year, and I think this could be quite popular for the following reasons:
– very interesting characters
– many lesbians
– many ecchi, but not yet 18+, scenes
– brilliant twists and turns

Also, this was done by Amano Shuninta, no more reasons needed.

I always imagined this manga as something like Sakura Trick, just with less random yuri and a more mature approach on how a first relationship between two girls could look like.

So despite the risk of getting people to hate me, I’ll still state the following: Kase-san might be a better version of Sakura Trick.

Still, I have to add, Sakura Trick was already fantastic, which means that I think that Kase-san might turn out to be a masterpiece.

4. Qualia the Purple by Hisamitsu Ueo and Shirou Tsunashima

This manga is far different from any of the ones that are already listed.

This one doesn’t focus on the yuri relationship like all the other manga that you’ve already read about in this post. It rather focuses on its amazing sci-fi story and takes us on an adventure through time and space.

It might feel a little odd to add a manga like this, but in this case, I’m 100% certain that an anime adaptation of this manga—or rather, the novel this is based on—would turn out to be really popular. 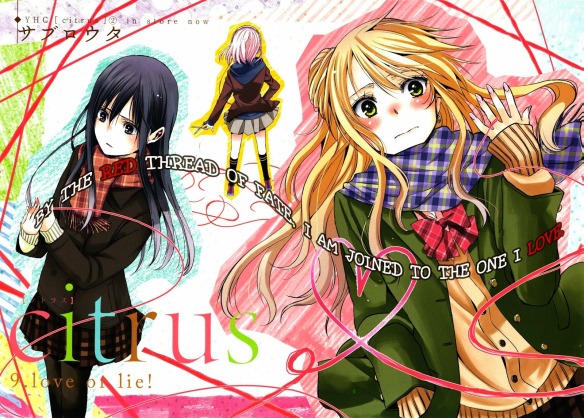 It has come to the point in which even some former diehard Citrus fans have started to turn their backs on this manga and I’m actually not surprised.

So to make this anime adaptation a success, it shouldn’t be longer than 12 episodes, and should only follow the happenings of the first two volumes.

Well, it would of course need a good ending, with Yuzu and Mei finally getting together (and making out until they can’t even stand anymore), but I think that’s kind of all it needs to make this anime adaptation a HUGE success.

I can actually guarantee that a story like this would definitely be really popular.

Along with Qualia the PURPLE, this is the only other manga in the list that doesn’t completely focus on any kind of yuri relationship. It is a big part of the story, but the main focus is rather set on something else.

In this case, it’s so easy to imagine this as an anime. It has almost all the themes that are required for a successful (yet mainstream) anime:
– school setting
– a little bit of magic
– a lot of fighting
– fighting that involves girls with big boobs and skimpy clothing
– a system / world that is corrupted in some way
– a strong main character who wants to change this system

But best of all, the main character is a girl with a yuri harem.

This is all that needs to be said. Someone, make it happen!

I bet a lot of you already knew that this would be my number one, or at least very high on the list. It’s no surprise actually, because the one thing that I want to see the most is a simple romance between two girls.

I want to see a story with two girls getting to know each other, becoming friends, and finally becoming lovers. There needs to be some obstacles in their way of course, but there doesn’t need to be any action sequences involved.

All that is necessary is a kiss in the end. That’s all.

Girl Friends is exactly that. Which is why it’s my biggest wish to see this, or at least something similar to this, as an anime.