As part of the yuri class of 2009 alongside Aoi Hana, Kanamemo, Maria†Holic, and Maria-sama ga Miteru among others, Sasameki Koto has a lot of expectations to live up to. For anyone who has ever been involved with one-sided love, SK might just strike a certain chord with you. That being said, the series doesn’t take itself too seriously and has more than enough comedy to keep things from becoming a pity party.

Ushio Kazama has a problem. She just can’t seem to break free from the shackles of unrequited love. For years, she has fallen into the habit of falling for someone, only to have her heart broken when that person wouldn’t return her feelings. Her best friend Sumi has bore witness to this numerous times, but what Kazama doesn’t know is that Sumi has been withholding her feelings for Kazama for some time now. When the inevitable happens and Kazama is again left to wallow in her sorrow, Sumi is there to be Kazama’s shoulder to cry on. Stuck in a perpetual love triangle with Kazama and her short-lived love interests, Sumi struggles to work up the courage to reveal her true feelings to Kazama.

One-sided feelings plays a role in several of the relationships in the series and in all but one of those, the person who has feelings for the other doesn’t make their feelings known in a timely manner, which is really frustrating. I know it’s a hard thing to admit something like that, but you just have to take a chance and go for it, I say. Kazama is the one who’s been unable to land a girlfriend, yet Sumi garners more sympathy from me because her feelings seem more genuine than Kazama’s. Aoi is also someone you feel for, but in the end, it all comes back to Sumi & Kazama. It’s as if fate is teasing Sumi, then pulling the rug out from under her when she gets too optimistic.

“There isn’t anything funny about unrequited love.”, you say? Well, Sasameki Koto begs to differ. The comedy is definitely here in spades. SK does a great job of having enough comedy to offset the drama. It’s hard to have quality romance between two characters that don’t exactly see eye to eye—and more romance would have been perfect—but the story is still very sweet and pretty enjoyable. In regards to the ending, I can’t say I loved how the story concluded, but the lead up to the finale was still enjoyable, given the circumstances. Overall, the story was sufficient enough and didn’t really do anything to take away from the viewing experience.

In addition to excelling as a student, Sumi is also a superior athlete as well. She’s a bit of a plain-Jane and boy-ish, at least to Kazama. Speaking of Kazama, she’s the girl who is unlucky in love, yet she unknowingly holds the key to Sumi’s heart. On top of being rejected by other girls, Kazama was even rejected by an all-girls school when she stated that her reason for applying was because she likes cute girls. Does honesty count for nothing these days? Anyway, Kiyori is a close friend of both Sumi and Kazama, and she’s practically inseparable from her snacks. If she’s not eating her snacks, then she’s surely thinking about them. Tomoe and Miyako are a couple that Sumi & Kazama catch kissing in the classroom. They get the idea to start a “girls club”, in order to bring together more girls who like other girls. Naturally, they try to recruit Sumi & Kazama to join their ranks. Tomoe took 2 years off from school, so she’s older and wiser than the other girls. Meanwhile, Miyako is a conniving loli who has a sharp tongue. Aoi is a yuri fan that gets inspired to write her own doujin and novel. She’s ostrasized by her friends for her interest in yuri, and later develops a kinship with Sumi, thanks to her apparent interest in girls’ love. Akemiya is the vice chairman of the class who has a very peculiar hobby. His little sister makes quite the impression and is definitely a unique personality as well.

As good as all the other characters are, Sumi undoubtedly steals the show with her antics. Basically, she’s everything you could want in a main character. She’s cute at times, hilarious whenever she wants to be, and just fun to watch, overall. Replace Sumi with an average main character and the show could still be enjoyable to a degree, but she adds so much that it’s hard to imagine another character bringing as much to the table as she does. Bravo, Sumi. Bravo.

There isn’t all that much to say about Sasameki Koto from an animation perspective. It’s pretty much standard fare that generally resembles every other anime from that time period. As far as fanservice goes, the obligatory beach and pool episodes are present, as is a brief bath scene, not to mention Sumi’s own delusional fantasies, but I don’t think it’s enough to classify it as ecchi. The character designs certainly don’t win any points for originality, but if it ain’t broke, don’t fix it, I suppose.

Sasameki Koto is a show strongly rooted in unrequited love, and the OP “Kanashii Hodo Aoku” continues this theme. It’s a slow-paced ballad that’s actually a bit of a downer. It’s not really representative of the overall tone of the show, but it’s still lovely and touching. On a more cheerful note, the ED “Niji-iro Pocket” is a much more upbeat and lively tune. Neither track is outstanding, but they both are solid in their own respective ways.

Between Sumi’s reluctance to admit her feelings for Kazama and Kazama’s insistence that Sumi isn’t her type, things quickly turn into a stalemate between the two leading ladies. Sumi’s struggle to get Kazama to think of her in a romantic way is a huge part of the show. She even tries to become more like Kazama’s preferred significant other, although she soon reverts back to herself. As soon as she gets her hopes up, those hopes are dashed, but she always ends up coming back for more. She truly is a glutton for punishment. Kazama isn’t as transparent with her feelings, but it’s pretty obvious at times how much Sumi means to her. The other relationships are the potatoes to Sumi and Kazama’s main course, but they’re still entertaining in their own ways. Aoi’s attachment to Sumi through yuri is amusing, yet sweet, while Tomoe and Miyako bring some extra spice to the show. Akemiya even tries getting in on the yuri fun, but despite his best attempts, he’s left disappointed.

Sasameki Koto is at times personal—with some genuinely heartfelt moments—and at other times, it’s goofy and ridiculous, but throughout its entirety, it’s a very entertaining series that has a lot going for it. How it’s able to adeptly balance drama and comedy is pretty impressive and makes the series one that should be on every yuri fan’s watched list. 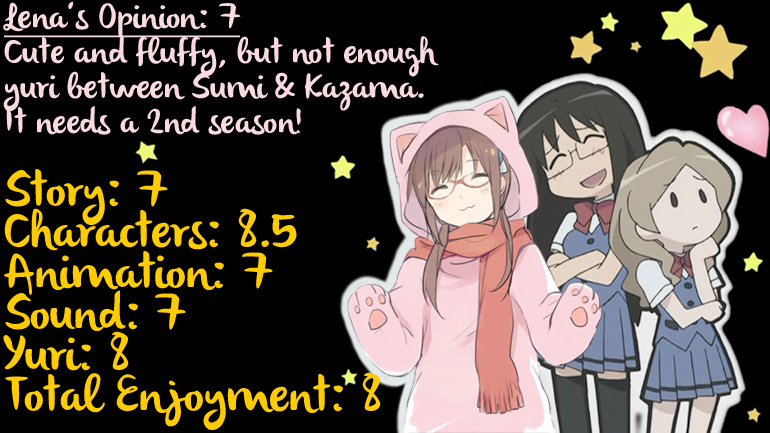