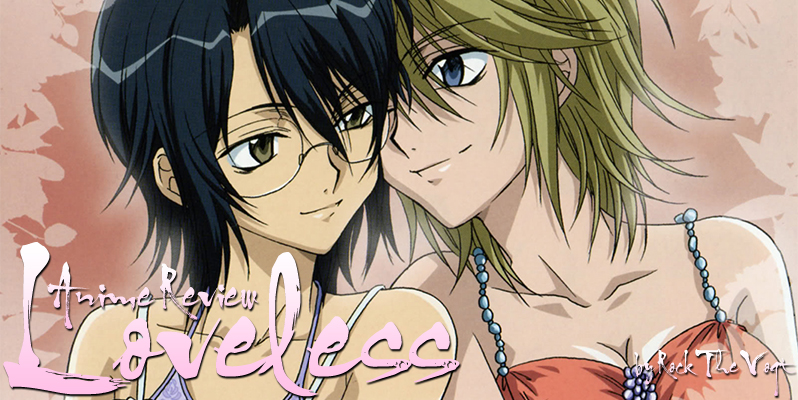 I know what you’re thinking. “Loveless? Isn’t that yaoi? You can’t have yaoi on YuriReviews!!!”. Well, after conferring with Lena, I was given her blessing to go ahead and give this a review. While Loveless is much more well-known for its yaoi content than for its yuri, this series is a prime example that more doesn’t always mean better.

Ritsuka Aoyagi is an elementary school transfer student who’s going through somewhat of an existential crisis. Two years prior to the beginning of the story, Ritsuka lost his memory. This causes a personality change in Ritsuka that has a major effect on his mother, who becomes physically abusive towards him and claims he isn’t “her Ritsuka” anymore. After violent episodes like these, Ritsuka is regularly comforted by his older brother… up until his brother is murdered under mysterious circumstances.

After school one day, Ritsuka is approached by a man named Soubi who says he knew Ritsuka’s brother, Seimei. Because Soubi was a friend of Seimei’s, Ritsuka is immediately open to a friendship with him, but Soubi has something more in mind than just being friends…. As it turns out, Seimei posthumously left Ritsuka a letter explaining that a mysterious group known as “The Seven Moons” was responsible for his death, and he has left Ritsuka his Fighter, Soubi. Ritsuka, like Seimei, becomes Soubi’s Sacrifice. These Fighter/Sacrifice pairings normally share a deep bond that strengthens their abilities in spell battles with other pairings. The Seven Moons seeks to abduct Ritsuka—whose “true” name is Loveless—and send pairs to retrieve him, but as Ritsuka’s Fighter, Soubi is not about to let that happen so easily….

The narrative has a few problems, but the most notable is lack of resolution. When all is said and done, there are several unanswered questions that remain, and there’s no reason why they couldn’t have been answered. It feels like so much time was spent on furthering mysteries that went unsolved that could’ve been better served fleshing out things like The Seven Moons or why people are battling in the first place. At this point, another season is extremely unlikely, so those interested would have to turn to the manga for more closure. It’s just disappointing to have a story that is really interesting at times drag its feet and squander some good opportunities.

Moving on, enough has probably already been said of Ritsuka and Soubi, so let’s take a quick look at some of the other characters.

Yuiko is a female classmate of Ritsuka’s that takes a liking to him. She’s a bit ditzy and has a very childlike personality. Yayoi is another classmate of Ritsuka’s. He has a major crush on Yuiko and regularly envies Ritsuka due to Yuiko’s interest in him. Hitomi is the students’ home room teacher. Despite being 23, she’s the only adult in the series who still has their cat ears (which represent a person’s virginity). Natsuo and Youji are a pair of boys who go by the name Zero. They’re one of the pairs sent to retrieve Ritsuka. Due to their unusual origins, they’re unable to feel any pain, which makes them especially dangerous in battle.

Yamato and Kouya are a pair of high school girls who are the prototype for the Zero series, a line of genetically engineered humans. According to their creator, the products of the Zero series are easily replaceable and are viewed more as tools, rather than humans. Between the two, Kouya is the Fighter and Yamato is the Sacrifice. Yamato is the more playful and easygoing of the two, while Kouya is more serious and discreet. As a visible sign of their connection, both Kouya and Yamato share a zero mark on their breasts.

The cast of characters is fairly enjoyable, even the angsty Ritsuka and shotacon Soubi. A benefit of the pacing problems is that nearly all of the characters get enough time to make a favorable (or unfavorable) impression. If I had to choose a favorite character, I’d go with Yamato, but Hitomi was a close second. The character development is a mixed bag, with only Ritsuka and Kouya/Yamato (to a lesser degree) going through some significant changes over the course of the story. The characters could have been more memorable, but they complement each other well and make the viewing experience pleasant, for the most part.

Loveless first aired in 2005, and a quick look will remind you how much anime art styles have evolved over the last decade. What’ll probably immediately catch your eye (pun intended) are the eyes. The long, curvy irises just look strange most of the time. In addition to that, there’s also the perfect triangle faces and uber pointy chins of days gone by. It can be a bit off-putting for some, but I didn’t mind too much and soldiered on. Animation-wise, Loveless is at its finest during the spell battles. Regardless of the tactics used, these moments look good and provide some eye candy to an otherwise slightly above average-looking anime.

Both the OP “Tsuki no Curse” and the ED “Michiyuki” turned out to be pleasant surprises. They’re pretty catchy—especially the OP—and given that Yuki Kajiura (of Madoka Magica fame, among many others) wrote and composed them, that’s to be expected. The background music is also fantastic, with my favorite track being this one. With memorable music and some solid voice acting, the audio ends up being one of the best aspects of the series.

You have to wait all the way until episode 8 for Yamato & Kouya to make their first appearance, but by the time the credits roll at the end of episode 10, you can’t help but feel satisfied with what’s transpired over their three episode story arc. They’re very affectionate (much moreso than Ritsuka x Soubi), and you get the impression that they are truly in love with one another. Despite a fraction of the screen time, Yamato x Kouya share roughly the same amount of kisses as the male pair, which was pretty surprising to me.

Yamato doesn’t shy away from the fact that she’s missing her ears, but Kouya on the other hand, wears fake ears to mask the fact that she’s no longer a virgin (presumably having lost them to Yamato). Thanks to the high-profile yaoi relationship, the yuri doesn’t get talked about very much, and it’s a shame because it’s a more meaningful relationship than what you’re likely to find in a lot of other shows with yuri themes. I feel that those who have watched the show will likely agree that it’s a bit of a hidden gem in the yuri landscape that will hopefully be discovered by more people in the future.

Assuming you don’t have a total aversion to yaoi, there’s definitely some quality yuri to be found in Loveless. It takes forever to happen, but once it finally does, it’s surprisingly good and by far the deepest relationship in the show. As a whole, the series is alright, but with some better pacing and a more conclusive ending, it surely could’ve been better.

Let’s talk about the elephant in the room for a second. Prior to watching the show, I knew next to nothing about Loveless. I just assumed the worst and expected something like a darker Boku no Pico with more plot. Having finished it, I have to say, the yaoi wasn’t too overwhelming. My expectations were probably way too low, but I thought what was shown was handled fairly well and didn’t come off as too creepy or exploitative. I won’t make a habit of watching yaoi, but having at least watched this, I won’t as readily judge a book by its cover.