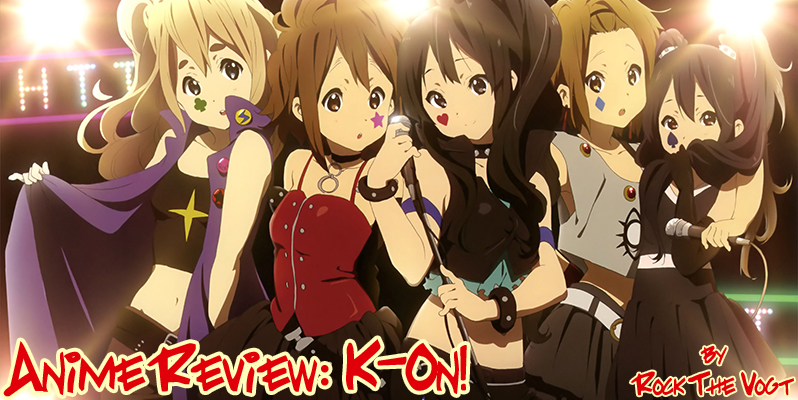 Hailing from the land of the rising sun, this next anime burst on the scene in 2009 and quickly stole our hearts with its cuteness and hilarious musical antics. You asked for it, and now you got it. Ladies and gentleman, please put your hands together for K-On!!

Yui Hirasawa was living a somewhat aimless high school existence until she felt the need to change all that. Through a chance meeting, she learns about the existence of her school’s light music club. The problem is, since all of the club’s members graduated the prior year, the club is at risk of being suspended unless four new members are found. Enter Ritsu and Mio, who are able to recruit a third member and need only one more to bring the club back from the brink. Yui’s complete lack of musical acumen proves to not be an issue, and she decides to become the fourth member of the light music club. The girls have aspirations of performing at the Budokan someday, but they soon discover how much hard work is required and would rather just have fun instead.

The story is pedestrian, but the comedy helps mask its inadequacies well. Thanks to said comedy, there’s rarely a dull moment, despite the high amount of fluff involved. Outside of maybe a couple of moments, the tone of the series stays playful and doesn’t stray too far from the lighthearted “cute girls doing cute things” category that we all know and love. Slice of life shows are generally lacking in the story department, and even though K-On! is no exception, it does enough to keep things entertaining and makes you want to see these girls continue to rock out. 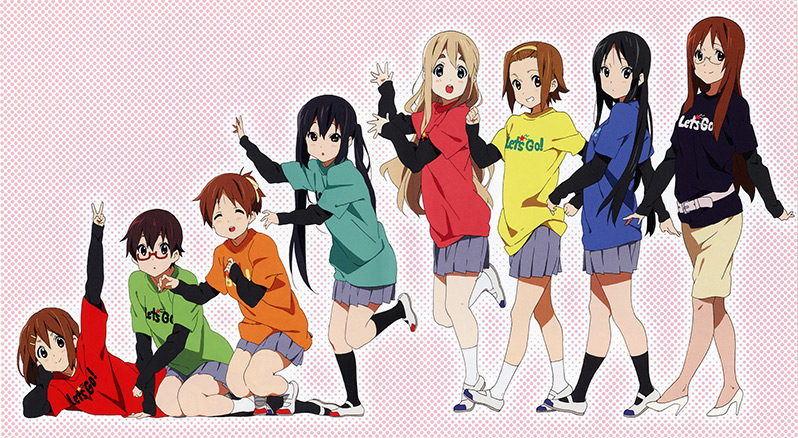 Unlike some other musical anime that feature too many characters *cough*Love Live!*cough*, K-On! has just the right amount, so everyone gets enough screen time. Bassist Mio, guitarist Yui, other guitarist Azusa, keyboardist Tsumugi, and drummer Ritsu all bring a little something to the proverbial table. Even their club advisor, Sawako, makes her presence felt in a major way. There really isn’t a dull character in the bunch, with the closest one maybe being Ritsu or Tsumugi. Considering how strong some of the other characters are, that’s not a bad thing at all.

It’s not very surprising that Mio’s become the most popular character among the fanbase. She’s arguably the most talented, best-looking, and is right there with Yui when it comes to comedic value. Oh, Mio. Why must you be so great? In all, the cast of characters are memorable, and it’s easy to see why a second season and movie were greenlit.

Kyoto Animation is the production studio behind the series, and they did a pretty good job handling the visuals. The series is over six years old now, but you probably wouldn’t know just by looking at it. From the characters to the background and environments, the art is well-done and upholds KyoAni’s reputation for producing some good-looking anime.

The Seiyu Awards, as well as the Animation Kobe Awards, are among the outlets who’ve bestowed musical honors upon the series. Both the OP “Cagayake! GIRLS” and the ED “Don’t say ‘lazy'” are sung by the voice actresses for the 4 eldest club members and both are fantastic. The ED “Don’t say ‘lazy'”—which won the Radio Kansai award for best theme song—is particularly noteworthy. Yoko Hikasa (Mio’s seiyuu) proves herself to be quite the frontwoman, and it’s definitely my favorite tune in the series. As for the other aspects of the audio, the other songs performed are quite good too, the background music is textbook slice of life, and the voices fit the characters perfectly.

There isn’t all that much subtext, but the majority of what there is comes from the relationship between Mio and Ritsu. Mio’s overly serious personality often clashes with Ritsu’s teasing and playful attitude, resulting in Ritsu being left with a knot (or two) on her head. The subtext between them becomes more apparent when Ritsu gets a bit jealous of Mio’s newfound friendship with another girl. In addition to Mio x Ritsu, there’s also Tsumugi. Tsumugi shows some interest in Sawako, but when asked about it, she tries to play it off as if it’s nothing.  Don’t try to hide it, Mugi! Oh, and Yui’s a bit touchy-feely with Azusa. Azu-nyan’s absolutely adorable though, so you can’t really hold that against Yui. At the end of the day, it’s only a modest level of subtext, but the fact that there’s any at all makes an already good thing even better.

Music-themed anime are nothing new, but K-On! can probably make a good argument for being one of the better ones out there. The slice of life elements are strong and contribute to the show not being overly serious, but that opens the door for the comedy to shine, and shine it does. A musically-infused comedy with some minor yuri subtext attached, K-On! hits all the notes en route to the top of the charts, at least in my book.