Story: 9/10 and Characters: 9.5/10
Hibike! Euphonium is an anime about a school concert band club, their numerous members, and their journey to the national championship.

The story focuses on Kumiko Oumae, a freshman who has already been a member of the concert band club in her previous school. She’s still trying to come to terms with the happenings of the last big tournament that she participated in with her former club members, and when she meets Reina Kousaka—one of the said members—things get troublesome for her.

I haven’t read the original novel that this anime is based on, but what I can say is that I really love the way they present the characters to us in the anime. Kyoto Animation is one of the few studios that I can always be sure to show us a very lovable set of characters, and they didn’t disappoint this time either.

Reina and Asuka are definitely my favorite characters, but I also liked Kumiko and Hazuki. I feel like they are all really unique characters that I just can’t help but love.

Story-wise Hibike! definitely scores high as well. I would have never thought that a show about a concert band club could be that intriguing and interesting to watch. I also never thought that this might even come close to what Kyoto Animation managed to do with K-On!, but surprisingly, it actually does come very close to how much I enjoyed the former masterpiece.

The pacing is great, the presented obstacles are believable and not over the top like in many other shows, and best of all, the characters and their way of interacting is really great to watch. You can see them grow as a group, while I especially liked how Kumiko and Reina developed as… well, something close to partners, lovers even – but we’ll come to that later.

All in all, I’m highly satisfied with what this show showed us so far, and I sure hope that there will be more in the future. 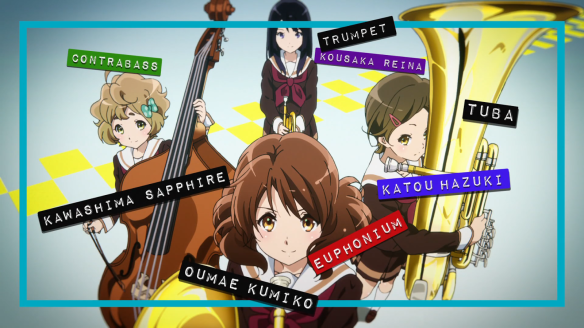 Animation: 9/10
And again, I just can’t stop praising Kyoto Animation. I simply like their animation style. It’s so light, fluffy and cute, yet the characters don’t look like little kids, but actually their age.

It’s really pretty and nice to watch. The same goes for the flow of the animation. You can see that they put a lot of work into this one, and it’s so great to see that they also payed attention to little details like background characters, as well as simple things like specific changes in facial expressions. It’s just something that Kyoto Animation is really good at, in my eyes.

Yuri: 6/10 – Strong Subtext
Let me just take a big breath before I start with all I have to say when it comes to this anime and its yuri content.

First of all, I shouldn’t even complain. Kyoto Animation is one of those animation studios that is pretty much known for what is called “queer baiting”. For those that are not familiar with this term, it simply means that they are trying to gain more viewers by baiting us with potential yuri.

I have to say, they did a great job in my case, since I only started watching Hibike! because of the possible yuri content that people kept promising me.

And scenes like this where we’re are screaming the word gaaaaaaaay.

In the end, they of course didn’t go “full yuri”, and instead hinted at Reina and Kumiko’s possible male partners. Now, that usually wouldn’t be that big of a problem for me, however, this show made it so unbelievably obvious that there is something going on between the two girls. They have such a great chemistry—one that I’m even missing when it comes to some canon pairings—that I just cannot accept the way they forced the heterosexual romance into the story.

It simply doesn’t sit right with me. And that’s not just because I’m a yuri fangirl, it’s because a possible relationship (especially between Shuichi and Kumiko) just doesn’t make any sense to me.

Total Enjoyment: 8/10
If it wasn’t for the queer baiting, this show would have been almost perfect, a certain 9/10. Though, since this bothered me, as well as many other people as much as it did, I simply can’t give this show any more points.

If there’s going to be a second season, then I sure hope that they are going to do something about this. But I have a feeling as if a possible sequel might end up being 100% het…. Ah damn….

All we wanted was more of this….