As a spin-off of the original Soul Eater, Soul Eater NOT! takes a far more lighthearted approach than its predecessor. Seemingly aimed at a different audience than those who loved the 2008-2009 classic, SEN! expands the mythos and sheds some more light on one of the lesser known aspects of DWMA, specifically the NOT curriculum.

Residing in the heart of Death City, Death Weapon Meister Academy is where young meisters and demon weapons learn to master their latent abilities. After a fall at home, Tsugumi Harudori discovers that she is a weapon and enrolls in the NOT (Normally Overcome Target) class at DWMA. A weapon needs a meister to wield it, so students must pair up with a compatible partner in order to function properly. Unlike the EAT (Especially Advantaged Talent) class—which focuses on using your power to fight the forces of evil—the NOT class is the curriculum for non-combatants that focuses on being able to control your power to be able to lead a normal, everyday life.

A large portion of the story revolves around Tsugumi having to choose who will become her partner, Anya or Meme. Being primarily a slice of life show, the pacing isn’t that brisk, and there’s some inconsequential fluff added in, but there’s enough comedy to help ease any reluctance one might have. Also, the mix of slice of life with occasional action makes for a unique combination that provides a couple of darker moments in the series than what is normally found in the genre. At times darker than most other slice of life shows, yet lighter than most other action shows, SEN! strikes a fair balance between the two, but still delivers a somewhat mediocre story. 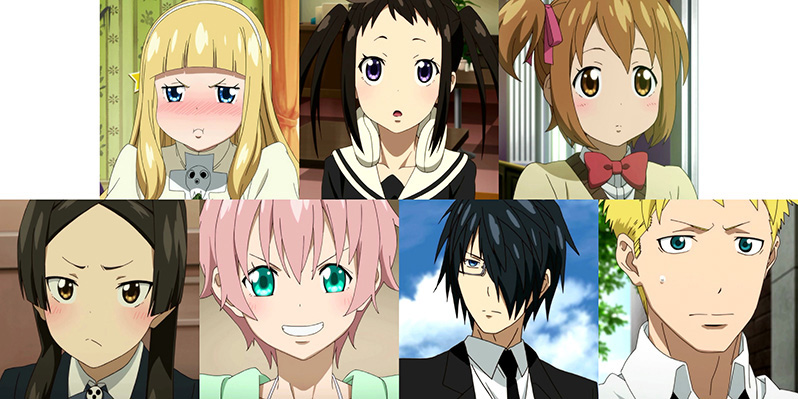 The characters are decent enough, but compared to the original Soul Eater cast, they pale in comparison. Speaking of the original cast, a few of them make the occasional cameo, but their roles are unfortunately limited. It’s all about the NOT enrollees here. Things begin and end with Tsugumi, the main protagonist. She’s a rather generic lead who is average in practically every way. She gets the most screen time, but she’s too much of a plain Jane for me to care too much about her. Meme Tatane is one of the candidates to be Tsugumi’s meister. She’s incredibly forgetful—even forgetting her own name on occasion—but she’s a fantastic all-around athlete and a kind-hearted person. Oftentimes at night, Meme will start sleepwalking and will get into mischief like drunken boxing, late-night treks through town, and cozying up to Tsugumi in bed. She has much more personality than Tsugumi and is a good source of comedy. Every show is better with a tsundere character, and that’s where Anya Hepburn comes in. She comes from a life of royalty back home in Europe and is the other candidate to be Tsugumi’s meister. Her privileged lifestyle causes her to look down on “commoners” like Tsugumi, but she’s not too harsh about it. She adds a little something different than what cute Meme and ordinary Tsugumi have to offer. With Tsugumi being such a bland character, Meme and Anya carry more of the responsibility to keep things interesting, and they do an admirable job.

Another pair of noteworthy characters are Clay and Akane, a weapon/meister duo that work closely with the faculty of DWMA and assist the girls from time to time. This brings us to the main yuri pairing of Kim and Jacqueline. Kim’s a bit of a wild child who’s opportunistic in taking financial advantage of others and despises “straight-laced chicks” like Jacqueline. Jackie is the exact opposite. She’s stern and dependable, yet she chooses to befriend Kim and wants to be her weapon. If opposites attract, then these two will certainly test that theory to the fullest. It’s hard not to compare them to Maka, Soul, and company, but the cast is distinct enough to stand on their own and they keep viewers fairly interested in their exploits.

The original Soul Eater had a distinctive visual style, but Soul Eater NOT! eschews that for a more traditional style, which is a bit disappointing. It’s just feels strange seeing characters from the original not look like themselves. Apart from that, it’s vibrant and captures the tone and atmosphere of the series quite well. The action scenes can’t hold a candle to those of the original, but that’s not much of a surprise. Putting its own drastic twist on the original’s winning visual formula, SEN! proves what’s old is new again and lets us see some familiar faces in a new light, although the results end up being hit-and-miss.

The themes of the series aren’t bad, but they aren’t anything to get too worked up about either. The OP “monochrome” is the more uptempo of the two, but I’d still give the edge to the ED as my preferred theme. To me, it’s somewhat catchier, and it’s really grown on me quite a bit. Speaking of the ED, “Yuugure Happy Go” is sung by the seiyuus for the three main characters, and they do their part with sweet vocals, but it can’t quite elevate the two themes to anything more than just average. In general, the background music is fine and doesn’t do anything to mar the experience, but I wouldn’t say it it’s all that memorable either. As a whole, the audio is generally pretty decent and does a serviceable job across the board.

Given that it’s taking place in the Soul Eater universe, the yuri is surprisingly higher than one might expect. The dynamic of Tsugumi being torn between Anya & Meme is not unlike a mini harem of sorts. Tsugumi & Meme get along great and help accentuate Anya’s tsundere qualities when she wants to not be left out. There really aren’t many overt romantic vibes involved with the three of them, but their close friendship is cute and could be definitely be viewed as subtext. As for the main source of the yuri, episode 5 is where a majority of it takes place and almost exclusively focuses on Jackie’s desire to have Kim as her partner. Jackie gets help from the other three girls, and Kim’s rough exterior slowly softens a bit, resulting in her and Jackie making a cute pairing. The bad news is, after all that effort in building them up, Kim & Jackie don’t get enough screen time together in subsequent episodes and they basically fade into the background. At the end of the day, the amount of yuri still exceeded my expectations and provided one of the best episodes of the series, so maybe I shouldn’t complain too much.

If you’re a fan of the original Soul Eater, you might have mixed feelings about Soul Eater NOT!. Most of the things that made it stand out so much are missing and are replaced with cutesy slice of life that could rub fans the wrong way. However, judged purely on its own merits, the series is an average to slightly above average slice of life show with more action and more yuri-centric themes than you probably would have expected going in.