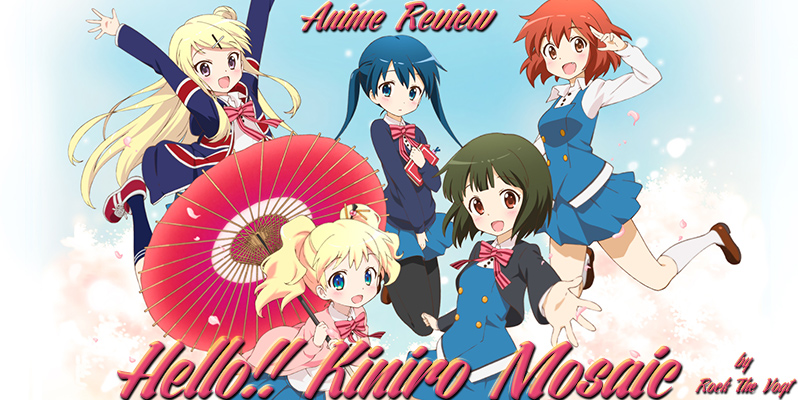 It’s been two years since Kiniro Mosaic first captured our hearts with its collection of cute girls and yuri-ish antics. Now that the second season just wrapped up, I once again take a look at how things turned out for our favorite quintet of moe characters. Does is live up to the expectations set by the first season?

Just like the first season, the story in Hello!! Kiniro Mosaic is mostly nonexistent and only there to allow the girls to do adorable things in a number of different ways. That’s not really a bad thing per se—as the main selling point is the characters themselves—so not having a plot get in the way of things is probably a blessing in disguise.

Despite the lack of a cohesive plot, the series is still as funny as ever. One noteworthy moment was the magical girls spoof that was reminiscent of the pirates parody from season one. Even though I felt the pirates bit was better, it was still surreal to see something like that once again. One thing I did miss from the first season were the short vignettes that were interspersed throughout each episode. Those were just great sources of comedy, and I wish they had found their way to season two. But that’s just a minor quibble. The story was all about setting the stage for the characters to shine, so I have to say it pretty much succeeded in that regard.

Everyone from season one is back, and there are a couple of new additions that make the ensemble cast even better, namely Kuzehashi-sensei and Honoka. Kuzehashi-sensei gets a good amount of screen time, and during a lot of it, she’s making life difficult for Karen. She was a great addition, even though she did steal some of Karasuma’s thunder. On the other hand, Honoka didn’t get as much screen time as I would have liked, but she made the most of her time and found her way into Karen’s heart. If there’s another season, she needs to join the others and be a central part of what’s going on.

Aside from the incomparable Karen, Aya has clearly emerged as the second-most popular character on the show, which is probably due to her tsundere-coated yuri moments. These moments were present in season one, but I think everyone is just much more appreciative of them this go around. I know I am. As for the remaining holdovers from season one, they’re the same as we remember them, which is a very good thing.

The quality of the characters is what separates this from so many other slice of life shows out there. These girls are just extremely lovable, and there isn’t anything resembling a bad character to be found in the bunch. To me, they’re the series’ greatest asset, and they’re put to good use throughout the course of the season.

Animation is one instance where things mostly stayed as they were from season one. Everyone and everything is as cute as ever, and even though it may not technically be that impressive to look at, the visual style is charming and suits the series well. The slightly animated manga scenes at the end of the episodes were also a nice little touch that didn’t go unnoticed. For a slice of life anime, Hello!! Kiniro Mosaic is a fairly average-looking show, but its appeal comes from the extreme amounts of cuteness, and that’s where it excels.

As compared to the first season, I think both themes are definitely upgrades over their predecessors, with the OP being the clear standout. The rest of the audio is by the book slice of life, with all of the bells and whistles that are staples of the genre, and nothing else that differentiates itself too much. The abundance of Engrish is back in full tow, and it still happens to be better than a lot of the spoken English you’ll hear in anime, so kudos goes out for that. Overall, the audio is slightly above average, but pleasant nevertheless.

Hello! Kiniro Mosaic is one of those rare slice of life shows where the yuri is embraced and isn’t just a throwaway item. Whether it’s Shino x Alice, Aya x Youko, or the newest pairing of Karen x Honoka, there’s some yuri basically everywhere you look. Even though those other pairings were good, it was Aya x Youko that were the top pairing, in my eyes. Aya’s still an adorable tsundere, and Youko is still as unaware of Aya’s feelings as ever, which makes for more awkwardly funny moments between the two.

Shino and Alice are still at it, but their relationship doesn’t seem to have the same oomph that Aya brings to the show. There are plenty of sweet and funny moments between the two however, so they do their part to boost the yuri rating. To make things even better, Karen was informally introduced to the yuri world, thanks to Honoka, so that makes all 5 of the main characters being involved in a yuri pairing, to some degree. It’s a little surprising that there’s so much, but things are still rather innocent. The good news is that it leaves plenty of room for more yurification.

Even though my score doesn’t exactly show it, I probably enjoyed Hello!! Kiniro Mosaic more than the first season. Content-wise, there isn’t all that much that’s changed from the first season, but considering how well Kiniro Mosaic was received, why mess with success? Let’s hope this series becomes like Yuru Yuri and there’s a third season, because these girls still have more adorable—and hopefully yuri-centric—things to accomplish. 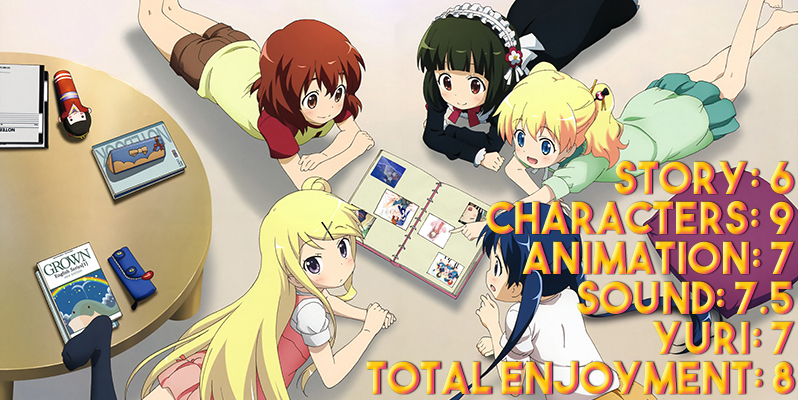