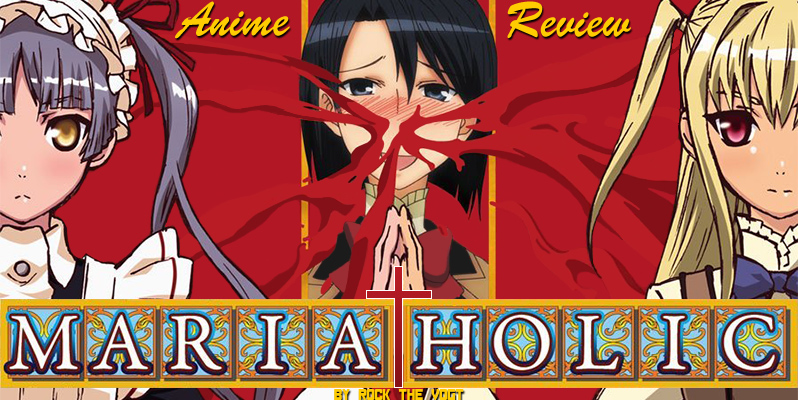 Since it seems that Maria†Holic is a touchy subject around these parts—and since you folks apparently wanted to see it reviewed—allow me to grant your request and jump on this yuri hand grenade in the name of reader democracy. Just be careful with those pitchforks and torches of yours.

Wanting to attend the same school where her parents first met, second year student Kanako Miyamae enrolls at Ame no Kisaki Girls School in order to find her fated love. Before Kanako can step foot in the missionary school however, she gets lost and crosses paths with Mariya Shidou, an incoming first-year honor student who offers to guide Kanako around the school. When the time comes for the guided tour, Kanako walks in on Mariya getting dressed and learns that Mariya is a boy. It’s here that Mariya’s figurative mask comes off and his true self shines through. He blackmails Kanako and threatens to claim she sexually assaulted his maid unless Kanako keeps his gender a secret. She complies, but since he doesn’t trust her, Mariya plans to closely monitor Kanako until she graduates in 2 years. 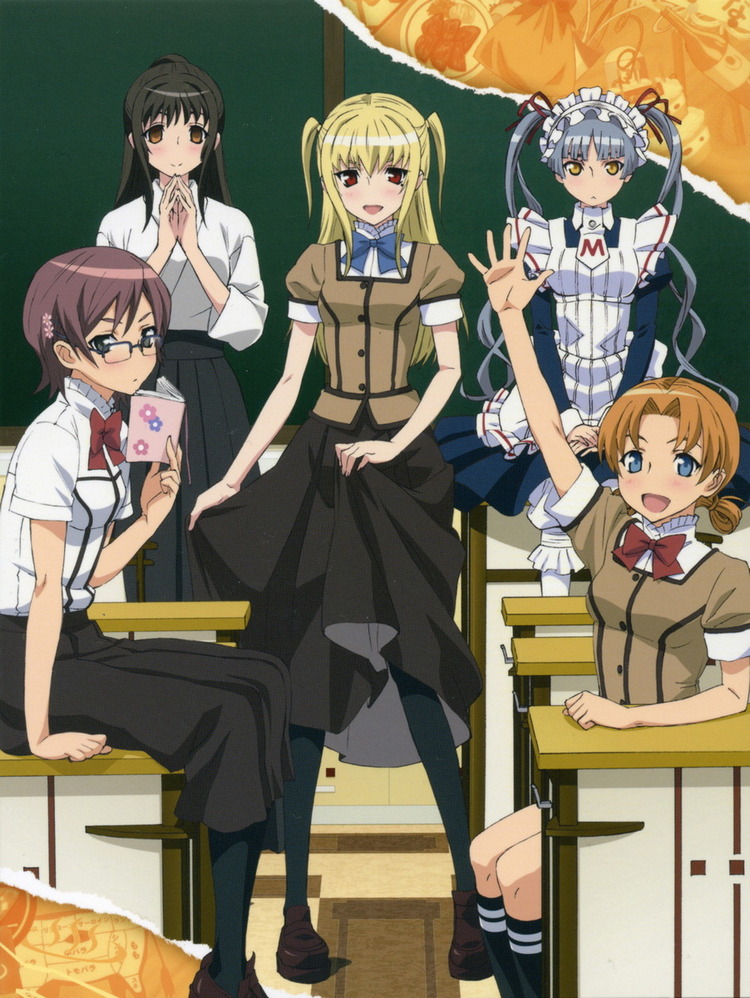 Let’s start by saying that the story really doesn’t go anywhere in Maria†Holic. The main plotline largely goes by the wayside, and we’re left with Kanako and her many delusions taking centerstage. Even though the comedic moments oftentimes come at Kanako’s expense, they’re still funny a majority of the time and they illicit some laughs. That said, having Mariya come up with different ways to insult Kanako is a joke that grows somewhat tiring after you’ve heard different variations of it for the umpteenth time.

I didn’t find much of what Mariya said incredibly malicious (other than threatening to rape Kanako if she divulged his secret, of course), and a lot of the time, he wasn’t saying something that wasn’t true. He’d often call her a pervert, and you can’t deny the fact that she has an abundance of perverted thoughts. I don’t feel he was criticizing her because she was a lesbian, he was mostly criticizing her because she was a pervert. Nevertheless, there isn’t much story to be found, and what little story there is feels like an afterthought.

Say what you will about the characters, but they’re memorable and leave quite the lasting impression. Kanako is the protagonist, and she’s the perverse, over-the-top character that’s no stranger to lowbrow comedy. She’s a bit polarizing in that she doesn’t like being called a lesbian, but prefers her sexual preference be called yuri or something more dignified. I can’t imagine that going over too well with some, but let’s keep moving along. The notion that if Kanako touches boys she’ll break out in hives is asinine, but it nevertheless contributes to the sophomoric comedy. Despite the fact that she’s definitely not the poster child for empowering yuri characters, Kanako is still pretty hilarious, and she also happens to be a yuri anime legend and yuri award winner. She may get a little flak, but Kanako is an angel compared to this next character….

It’s only fitting that in a Catholic school bound by a strict code of conduct, there’s a sinister force secretly undermining everything the school stands for. Of course, I’m talking about Satan Mariya. He’s the sadistic antagonist who takes the opportunity to torment Kanako at every turn. To everyone else, he’s highly thought of and respected, yet Kanako is the only one who sees him for who he really is, a loathsome creep who deserves all the hate he’s received. Even though he’s a major league scumbag, all of his twisted shenanigans serve to make him an excellent villain and someone you want to see eventually get his comeuppance. For that reason, his existence isn’t entirely a negative thing.

Matsurika is Mariya’s maid, and they share a hateful, yet reliable, relationship that sees them working hand in hand throughout the series. Her deadpan delivery of insults that she lobs at both Kanako and Mariya is amusing, and having her fire back at Mariya is something that’s desperately needed, since Kanako doesn’t really do it herself. The other major characters are interesting as well, but perhaps none are as entertaining as the dorm mistress. Imagine a terrifying 4-foot tall girl with cat ears whose unassuming exterior hides a fearsome inner tyrant. Her nickname is God, and given how she instills fear in all of the students, that’s a very fitting name. Overall, it’s hard to not come away liking the cast of characters. Personality is something the series isn’t lacking, and the characters are a major reason as to why that is. Whether it’s the main characters or the supporting ones, they do a good job of making the viewing experience a little more enjoyable.

Maria†Holic is a Shaft production, and it definitely shows that trademark style we’ve come to know and love. Good cinematography and some occasional off-the-wall visuals are staples that Shaft has brought to this series, and it pays dividends. It’s been over six years since its debut, but thanks to some slick production values, Maria†Holic is still fairly pleasant to look at, even today.

Audio production is another aspect in which Maria†Holic is strong. Both themes are great and might make skipping them a bit more difficult. At least it was that way for me. The background music and voice acting are also well-done and are perfect fits for the series. Audio was an aspect that Maria†Holic definitely got right and your ears will most likely be thankful~

There seems to be a belief in some circles that Maria†Holic isn’t yuri and that it’s anti-yuri. I don’t really share that sentiment and think those people are just taking things way too personally. Sure, it doesn’t paint yuri in the most positive light, but that’s generally the way parodies operate. This isn’t an anime where satire is used to make any sort of social commentary or anything, but it also isn’t an anime that’s going out of its way to ruthlessly attack yuri or demean lesbians or females or alaria. Shifting focus to more trivial matters…. Even though she may not be the most revered yuri character, Kanako’s intense interest in other girls can’t be denied. Over the course of the series, Kanako’s delusional thoughts of various girls get the better of her, resulting in blood loss and sometimes even a visit to the school infirmary. Kanako may get all the yuri attention, but she does gets a tiny bit of help in that regard. Yuzuru also displays some yuri-ish tendencies when she gets emotionally anguished seeing Sachi together with Kiri so much. It’s only briefly touched upon, but it’s obvious that Yuzuru has some interest in Sachi, adding a little more yuri into the equation. In closing, the yuri found in Maria†Holic is basic and used largely for comedic effect, but Kanako’s charm helps make everything all the more entertaining.

Maria†Holic is a parody that can at times be mean-spirited and vile, but if you take an unbiased look at it, you may realize that some of the blind vitriol aimed at it is somewhat misguided. That being said, I found it to be a one-trick pony of a comedy that wasn’t especially remarkable. It’s funny, but in a monotonous sort of way that could grow tedious for some people. If you’re a staunch yuri lover who takes major offense at any apparent jab at the genre, you’re likely going to hate it. For everyone else, you just might find something to like within the world of Kanako’s sordid delusions. 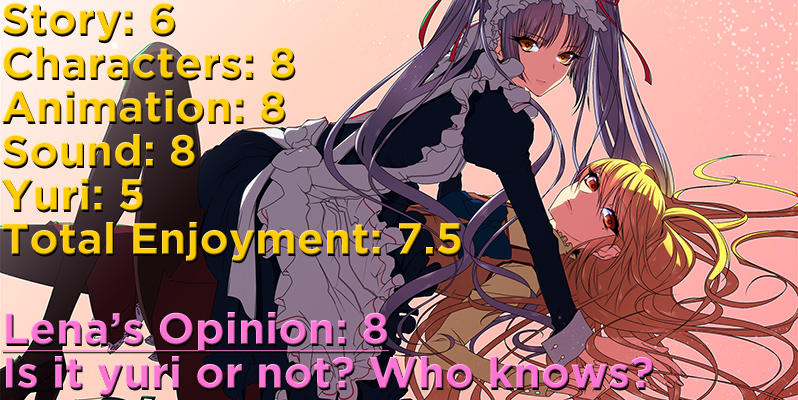