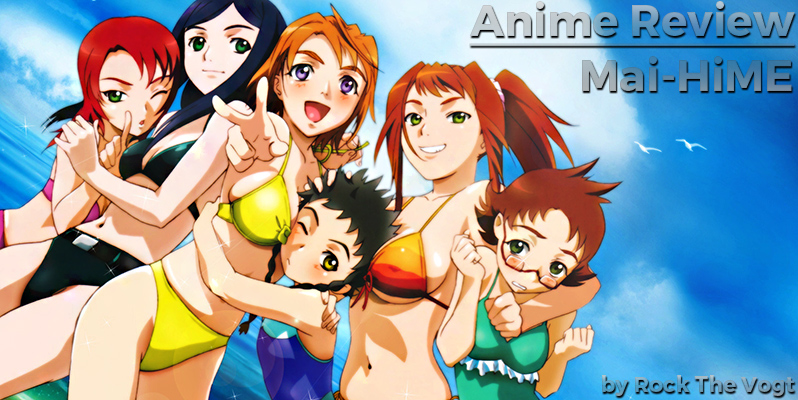 It’s time for another blast from yuri-ish anime’s past. This time, the weapon-wielding, Child-fighting goodness that is Mai-HiME, gets the YuriReviews treatment. A largely female-driven cast of characters helps provide the yuri, while the girls’ love for their dearest person helps bring out the necessary drama. It’s not exactly groundbreaking, but that’s not to say it isn’t entertaining, because it very much is.

The story in Mai-HiME takes a little bit of time to hit its stride, but when it finally does, it’s actually really enjoyable. The first half of the series consists of a bit more easygoing and light fare, but business really picks up in the chaotic second half, where things take a much more serious and sinister tone. Even though it sometimes comes off as a bit corny, comedy plays a big part in Mai-HiME as well. Throughout the series’ 26 episodes, there are plenty of comedic moments, such as the Iron Chef-like cooking competition and karaoke night out with the girls, that turned out to be enjoyable in their own right. While everything may seem fine and dandy, there’s a fly in the ointment that serves to lessen the entire experience. Where things came undone, in my opinion, was at the very end.

[SPOILER] (Highlight the white area to view the text)
For all of the loss of life and heartbreak that had happened up until the final episode, it all gets magically reversed, and everyone comes back and winds up living happily ever after. That’s just a major, major cop-out, and a textbook example of bad storytelling. It’s understandable to want a happy ending, but that’s just ridiculous. And that’s not even mentioning how bad the final battle with Lord Kokuyou was. The ultimate evil capable of destroying the world, and he gets defeated in an instant. “But wait, here’s my TRUE FORM! And as long as my weak spot is left alone, I’ll never lose!!!”. Yeah… that could’ve ended in a better fashion. Admittedly, it was fun seeing the other HiMEs all come together, but still, it’s a very clichéd way to end things.

The cast is quite large, so not all of the characters can be winners. Even though I wouldn’t say there are any bad characters, the likes of Yuuichi and Takumi don’t contribute all that much to the series. On the other hand, the main trio of Mai, Natsuki, and Mikoto all have many redeeming traits that factor into the story. Essentially, all of the HiMEs are pretty interesting, but others like the mysterious Nagi and Mashiro are as well. There’s a modest level of character development that transpires for a few of the characters, but nothing that’s too overwhelming. As a whole, the characters are likeable, relatable to a degree, and just plain entertaining.

The story is actually very compelling at various points, but the finale definitely left a sour taste that nearly spoiled things for me. I say nearly because, even despite the terrible ending, the narrative is still fairly enjoyable and engrossing. Overall, it’s a nice narrative that tries its best to ruin things for itself, but it doesn’t quite do that. It could’ve been far more impactful, but it still remains a flawed, yet still good, adventure.

Retroactively giving an animation score is perhaps the toughest thing to do, but let’s just say that Mai-HiME was a solid-looking anime back in its heydey. While the combat scenes certainly have their moments when they look very nice, what really stood out the most for me were the facial expressions. Whether it was a dramatic or comedic scene, the exaggerated expressions were very well done. At the end of the day, there’s just a lot to like about the visuals. It may be getting up there in age, but Mai-HiME is still respectable-looking.

As far as the overall sound design goes, Mai-HiME is good, but it’s not anything amazingly spectacular. The background music, voice acting, and sound effects are all fine, but they lack that certain je ne sais quoi that differentiates them from so many other series. As the mood of the series becomes darker, the audio follows suit and becomes more memorable as the show goes on. It may not be the best sounding anime you’ve ever heard, but it’s definitely more than adequate.

All of the HiMEs are female, so finding potential yuri pairings is easy as can be. There are a few to choose from, but the relationship that gets the lion’s share of people’s attention is Natsuki x Shizuru. Now, a lot of people ship these two, but I’m definitely not one of them. Given what happens late in the series, I just can’t give Shizuru a pass and turn a blind eye to what happened. That’s really a pity, because they easily should’ve been my favorite couple, had things played out differently. Those two might get the most pub, but there are several other pairings that are shippable (albeit to a lesser extent). Haruka x Yukino, Mai x Mikoto, and Midori x Yoko are but some of the others. Those other relationships are all tame and don’t so much as feature a kiss, but it’s not too hard to see the yuri vibes there. ShizNat is undoubtedly the yuri centerpiece of the show, but they’re certainly not alone in contributing to the overall yuri score.

It’s not without its faults, but Mai-HiME turned out to be a surprisingly dark take on the magical girl genre. Though dark at times, there’s not a lack of comedy, and despite the fact that the yuri is probably not as intense as most people would prefer, it’s apparent that it plays a major role in the series. The years have gone by, but Mai-HiME still remains a worthy addition to any yuri fan’s collection. 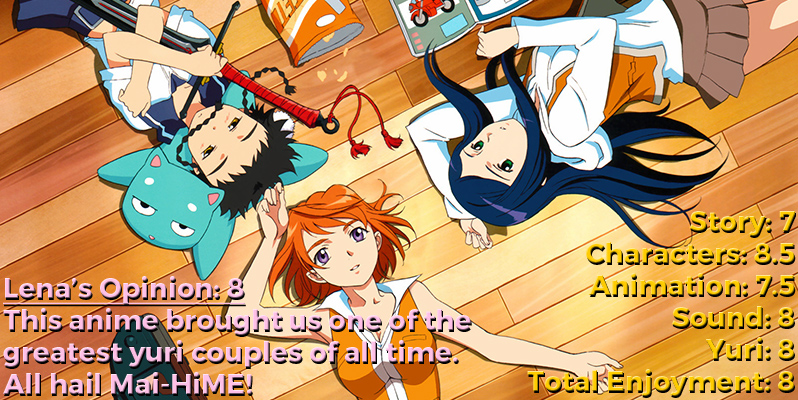