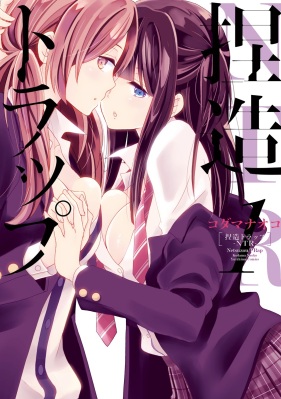 I thought the day would never come when a manga would receive the same – or at least almost the same – kind of reactions as Citrus. Just by that, we already know that this is going to be one of the more popular, or let’s say, talked about manga of the year.

Story: 8.5/10 and Characters: 5/10
The story is very simple, yet it leaves a lot of room for possible drama: Yuma is in her high school years, enjoying her time with her best friend Hotaru, as well as Takeda, her love interest and later boyfriend. Things start our slowly with him, and knowing that this is her first time being in such a relationship, there are many things that she is uncertain about. And that’s exactly where Hotaru, her best friend since childhood, comes in and tries to “help” her, which unfortunately makes things even harder for Yuma.

Putting it like that, the story actually appears to be quite tame, innocent even. Yet this manga does not just very much earn it’s ecchi tag, it’s also classified as something called NTR. Before stumbling upon this very manga, I didn’t know about this genre, so let me just explain it in a few words. NTR, or Netorare, is a term often used in adult stories in which the love interest of the male protagonist gets taken away, or more likely seduced by another character, evoking feelings of jealousy within the reader.

Many people don’t like this genre for good reasons, but I believe that this kind of setting might bring forth some very interesting events, and since I’m a fan of excessive drama, I immediately liked this piece. Well, I do believe that—even if the author put NTR in the title—the manga still can’t really be categorized as Netorare, but we’ll get to that later.

One big reason why this manga is getting so much hate right now is the fact that many people actually don’t like the yuri that is happening. You heard that right, yuri fans don’t actually like the yuri that is taking place in a yuri manga. That is definitely a first, and a phenomenon worthy of our attention.

So what is the big problem with Netsuzou Trap? The thing is, Hotaru is a bitch. Her ways of “teaching” Yuma and helping her take her first steps in her relationship with Takeda are what many people see as sly, bitchy, and selfish. She might seem as if she doesn’t really care about Yuma’s feelings on that matter and manipulates her into going along with her will. Though, and that is the one thing about this manga that I love so much, you might also say that’s she’s seriously trying to help – simply in her own way. Her true intentions are revealed in later chapters, but you might still say that she only wants Yuma to be happy.

She is giving Yuma some serious advice, and she does give them their alone time when she feels it is needed. It is simply apparent that she has romantic feelings for Yuma as well and probably doesn’t know how to deal with it without destroying her best friend’s relationship. Well, she does try to get Yuma “on the right track”, but she’s never too forceful about it. 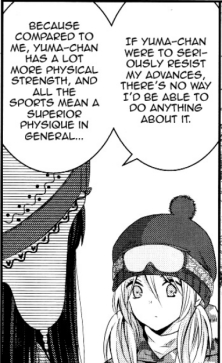 I know. I’m taking sides here. But I really do believe that she is not as selfish and bitchy as many people describe her to be. We just need more background story, which we will hopefully get in the next volume(s).

We should also not forget that Yuma goes along with most of what Hotaru does to her. Hell, she even seems to enjoy it, sometimes mostly even more so then with Takeda. So yeah, that’s called cheating, even if she’s not the one initiating it. And that’s what most people seem to overlook.

Takeda on the other hand, the person that we should probably emphathize with way more, is definitely a nice guy, no doubt about that. In that sense, he’s also a way better choice for a serious relationship than someone like Hotaru, but it’s quite apparent that their chemistry just doesn’t work.

Their relationship appears to be superficial, and the author seemingly doesn’t try to portray him or this relationship in any better or believable way, which is exactly why I don’t believe this is really a NTR manga. It doesn’t feel like we’re supposed to feel sorry for him, and it surely doesn’t feel as if Hotaru really is doing such a bad thing. In fact, this series is done by a yuri artist, and it runs in the Yuri Hime magazine, so I’m almost 100% sure it will end in a yuri way. Netorare simply isn’t what I would describe this to be. You can add the “cheating” tag, but that’s about it. 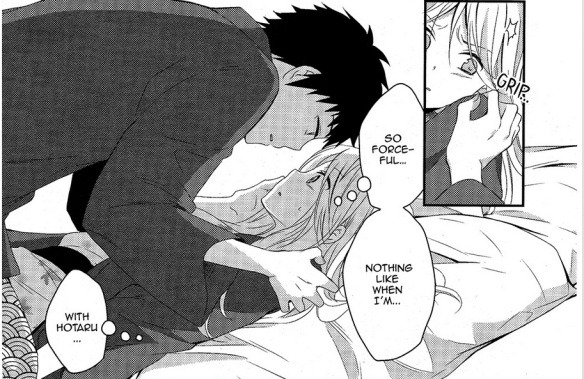 Yeah…. We all know what this means.

So, yeah. Story-wise, this scores very high, because it just delivers what I want to see and read about. It got me excited from the very first chapter and even managed to leave me, a die-hard yuri fan, in doubt of whether this yuri relationship would really be for the best. That’s a big achievement! However, even if this score is only that high thanks to the characters and their interactions, I still don’t think any of them actually deserve any better rating than the one I’ve given.

Without the background story that is so very needed, Hotaru’s actions come off as bitchy, Yuma seems like a spineless piece of meat, and Takeda, he’s a nice guy, but he’s boring and generic.

Art: 8.5/10
I am, and I always have been, a big fan of Kodama’s art. It’s something that just sticks out and is easily recognizable from other works. I actually believe that, just like in the case of Citrus, the art is a very big factor for the sudden “fame” of this manga. Something that looks that nice is simply more likely to get picked up than another work. Well, the fact that it has quite a few steamy yuri scenes probably helps a lot as well.

Yuri: 8/10
Right here, some of you might disagree with me. After all, this manga has the “het” tag, and it definitely deserves it. Yuma, the main protagonist, is in a relationship with a guy, and she undoubtedly likes him in one way or another. However, I do believe that no matter how much Yuma x Takeda this will eventually have, the manga will end with yuri. It’s inevitable really.

This manga runs in an all-yuri magazine, and knowing the author, it just can’t end any other way. Also, compared to these two little kisses between Yuma and Takeda, what we’ve seen between Hotaru and Yuma is – how to put it – a very direct hint into what direction this manga is heading. 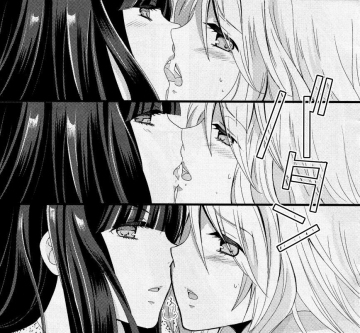 Total Enjoyment: 8.5/10
Despite the many good reasons that other people name why one should not enjoy this manga, I still enjoyed it quite excessively. I might come off as cruel, but I like this kind of setting in which a girl wins the heart of another girl against a guy. Yeah, I know. It might make me seem a little unappealing to guys, but when really, I just enjoy whenever yuri wins over anything else. Well, I don’t know the outcome of this one yet, but it just feels like I’m gonna enjoy it and everything that comes with it, especially all the drama.