I know, I know, this has been long overdue, but I just recently found the time to finally re-read this so I could write my review. So here it goes.

Story: 8/10 and Characters: 6/10
After a more or less failed career as a singer and idol, Yukino is now living alone in Tokyo, working as an idol manager. She’s very unsatisfied with her life and can’t let go of her past as an idol.

One day she meets Setsuko, a songwriter who shares a similar past to her own. Feeling like she has finally found someone who can relate to her own feelings, she lets herself be taken in by the strangely alluring Setsuko.

First of all, this manga is one of the biggest yuri stories we’ve ever seen. There are no less than 6 volumes focusing on the relationship of Yukino and Setsuko, and the yuri starts out like right when we get introduced to the characters. So unlike other yuri manga that have been going for a similar amount of time like Aoi Hana or Sasameki Koto, Octave differs from them in one big aspect.

Octave fully focuses on the yuri relationship at hand. It doesn’t add in tons of side characters, and it doesn’t take forever for the two protagonists to finally get things going. We’re basically thrown into their relationship from the first chapter on, and the focus is fully set on them for the whole run.

Well, I’m usually a sucker for really, really slow romances, so this is definitely not my ideal yuri love story, but it is satisfying nevertheless. And especially when we consider the fact that these two get on an emotional roller-coaster ride, once they meet for the first time. 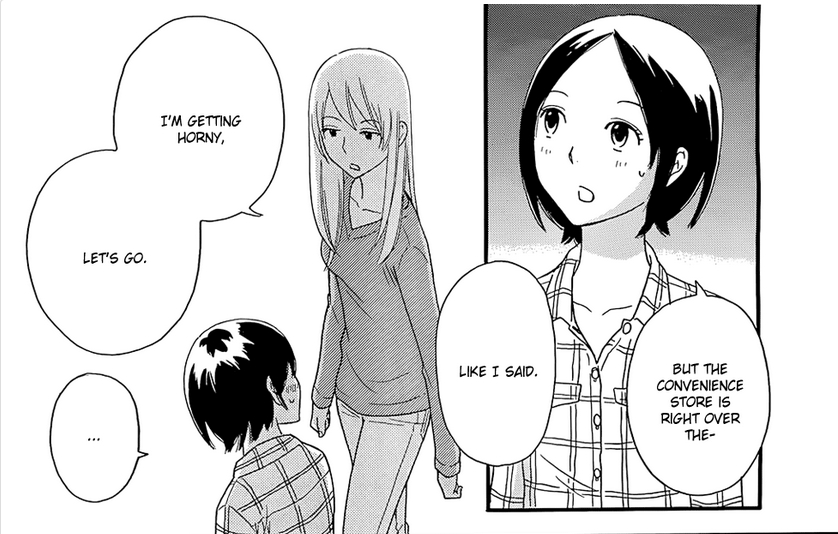 However, there is one thing that bothered me throughout the whole story, and that one thing is unfortunately the main character, Yukino. Sorry to put it so bluntly, but I hated her. I don’t feel this strongly about characters often, but damn, she was so annoying, and I was constantly hoping for her to just get another girl- or even boyfriend.

I just feel like she doesn’t really deserve Setsuko, who on the contrary, is probably one of my all-time favorite yuri characters in manga. Someone who’s so caring, understanding, cute, and yet also freaking cool; I just couldn’t see her with whiny, cheating, “Yukihoe”.

But enough about Yukino, let’s focus on something more satisfying, and that is how unbelievably well the characters seemed to developed through the manga, especially in case of Setsuko.

You might say she’s always been like that, but I think we witnessed quite a drastic change of character in her case, as well as in Yukino’s. The Setsuko we first get to know seems to be a really strong girl, someone who doesn’t really care what others think, and someone who just takes whatever she wants without a fear in the world. However, as we slowly get to know her, we realize that this is not really who she is, and by the end of it, we see her change into a really loving and caring girlfriend, which is a big surprise considering how Setsuko first treated Yukino.

All in all, I’m very satisfied with how the whole story played out. Even though I really disliked Yukino, she was mostly the one factor that made the whole story as exciting as it was, so I guess we could call her a necessary evil.

Art: 6/10
I know, it might be a little too harsh to give this “only” 6 out of 10, but this art style is simply not my cup of tea. It looks so simple, without much shading, and I didn’t really enjoy how this mangaka draws faces.

Don’t flame me for that, but as good as the story might be, the art simply doesn’t live up to it.

Total Enjoyment: 8/10
It took a while for me to gather the courage to pick up this manga again, and that is purely the fault of my arch enemy, Yukino. If it wasn’t for Setsuko, I would have probably stayed away from this manga for an even longer period of time.

However, as you can see, I re-read Octave, and just like it did the first time, it left quite a big impression on me. It is seriously a one-of-a-kind manga, and if you haven’t already done so, you should at least check out the first chapter of it.