Natural Selection. Survival of the fittest. I don’t think Darwin or Spencer had nightly battles for half-priced bento in mind when they thought of their theories. Nevertheless, that’s what Ben-To is all about. That may not sound like an ideal fit for yuri shenanigans, but this is a reminder that looks can be deceiving.

Ben-To has a very simple premise: As the day slowly winds to a close, hungry throngs of people gather at their local supermarket to await an event like no other… bare-knuckle brawling over discounted food. It’s an absurd idea to base a story around, but it somehow turns out to be not terrible. After getting caught in the middle of a throwdown, Satou loses his memory and finds himself right back in harm’s way the following night. It’s here where he crosses paths once again with Yazirui, the president of the Half-Priced Food Lovers Club, and his assailant. After running into Yazirui at school and later regaining his memory, he (and his newfound companion, Oshiroi) join Yazirui’s club. It’s here where Satou learns the ways of the ninja wolf.

The story isn’t great by any stretch, yet taking such a odd premise and making it tolerable can be viewed as an accomplishment. It may sound like the show is nothing other than nonstop fighting, but that’s not the case at all. It’s definitely the basis, don’t get me wrong, but there’s about as much comedy as there is brawling. Where Ben-To fares much better is as a straightforward comedy. Even though it’s unlikely to be the funniest show you’ve seen, there are still plenty of moments where the comedy acquitted itself very well. While the story is definitely lacking, it had all the makings to be much worse. As it stands, meeting the minimum requirements and letting their fists do the rest looks like it was a wise choice in the grand scheme of things.

Okay, so the story wasn’t great, but what about the characters? Well, that’s a very different story. For a series with a plot as basic as this, you’re going to need quality characters, and there are plenty of them to be found in this anime. Shiraume was definitely my favorite, but she’ll be discussed a little later, so let me just quickly mention that she’s yet another Yuri Anime Legend. Yarizui is the President of the Half-Priced Food Lovers Club and a powerful wolf known as “The Ice Witch”. She has a philosophical approach to the bento battles that sets her apart from the other fighters. Her stoicism can make her seem a bit dull at times, but her naiveté, as well as her fighting skills, immediately make her more interesting, come fight time. Next up is Oshiroi. She’s both a member of the Light Novel Society and the Half-Priced Food Lovers Club. Her hobby as an erotic BL novelist is a steady source of comedy gold that helps her become instant entertainment.

Satou is the protagonist of the show, and he’s not that different from your typical male anime protagonist. On his own, he’s not that great, but he’s surrounded by good characters that bring out the best in him and make him more interesting than he would be otherwise. Satou’s cousin Shaga is a bespectacled blond beauty who’s the series’ resident temptress. She’s the only character to have a separate OP, so she’s kind of a big deal. If you look up unlucky in the dictionary, you’ll probably find a picture of Asebi there. She’s a happy-go-lucky girl who’s unaware of all the bad karma she brings with her. Asebi doesn’t get too much screen time, but it’s always a treat to see her. Lastly, the Kyou twins are also fine characters, largely in part to how easy it is to sense the yuri vibes emanating from them. Their contrasting personalities also contribute to their appeal, but it’s the hints of twincest that are the main attraction. Overall, there’s no shortage of interesting characters that help breathe some more life into this series and make up for the basic story.

Ben-To certainly isn’t the best-looking anime out there, as some of the background characters can look a bit wonky at times, and combat that occurs in the background between ancillary characters is uninspired. However, the visuals substantially improve during the main fighting scenes, and Ben-To very much looks the part of a good-looking fighting anime as we’ve come to know them. There are a few unsightly moments, but largely thanks to some nice battle scenes, it’s an above average-looking anime.

If you could think up the perfect soundtrack for the high-energy action that accompanies Ben-To, it would probably sound pretty similar to the one you hear in the anime. In keeping with the overall tone of the show, the music also remains fun and frenetic, without being too heavy and serious. Apart from the fight music, there isn’t much that comes across as being particularly noteworthy. The audio is above-average fare that peaks at the most crucial times, yet also suits the more easygoing scenes nicely.

Even though Shaga does join the yuri party by getting all touchy-feely with Oshiroi—and the Kyou twins’ closeness should definitely set off the yuri alarm—Shiraume is undoubtedly the epicenter of the yuri discussion in this anime. She’s been Oshiroi’s only friend since grade school, and she’s extremely protective of her. In fact, overprotective would be a much more fitting term. She regularly kidnaps Oshiroi, administers beatdowns to Satou, and generally intimidates all who come in contact with her. Yes, she has a few screws loose, but that’s what makes her such a great character. The yuri hits overdrive in a titillating bath scene that was on the verge of entering R18 territory, but sadly, that didn’t happen. The only knock I can level at this show in this regard is how much better it could have been if Shiraume had been given a larger role. Nevertheless, the amount of yuri in this series was a very pleasant surprise and far more than I expected.

Ben-To doesn’t immediately come to mind when thinking of yuri-ish anime, but it’s a good example of yuri spreading out and having some success in an unexpected genre. There isn’t much of what I would call romance, but just the fact that yuri is present can already be considered a win. Lost in all this yuri talk is a wild and fun action/comedy that’s pretty enjoyable on its own. 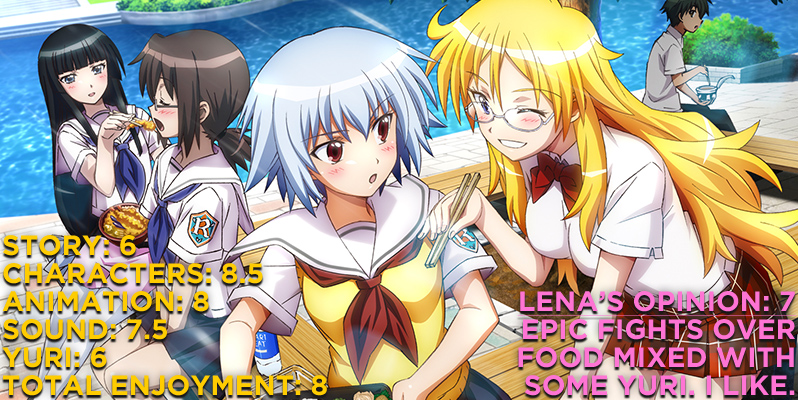