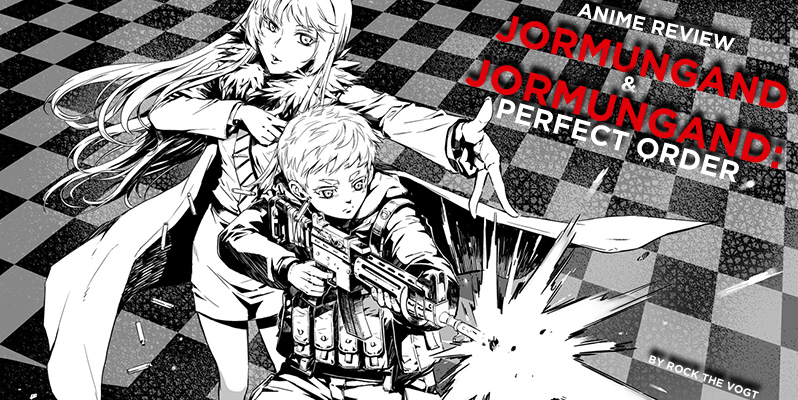 Taking a cue from Miss K’s dual review of the Sekirei series, I’ve decided to follow suit and double down on Jormungand. In a world where war is the order of the day, there stands an ambitious young arms dealer with a dream. And that dream… is of world peace. That may seem like the most contradictory thing ever, but Koko Hekmatyar’s train of thought is unlike that of you or I. So, how does yuri play into all of this? That’s a good question….

It would be easy to peg Jormungand as just another mindless action anime, but I think it deserves a little more credit than that. Both seasons share similar subject matter, yet they seem very different. In the first season, the series takes on a more episodic nature that doesn’t do the narrative too many favors. It feels as though the story was put on the back burner and the action was prioritized at the story’s expense. For the most part, it’s just a straightforward story that sets the stage for the second season, Jormungand: Perfect Order. Now, if the first season was just an appetizer, then the second is the main course. There’s a greater emphasis placed on the overarching plot, and the pacing feels more methodical and deliberate as a result. It’s not necessarily a bad thing, but it’s something that might take a little getting used to. Due to Koko’s secrecy regarding her intentions, the storytelling doesn’t focus on her as much as one might expect. Instead, Jonah, Koko’s adversaries and comrades, and others benefit from the attention and help to flesh out the world a bit more. A sense of humor keeps the series from becoming too heavy, but bigger picture topics like ethics and morality aren’t really delved into too much here. Then there’s how everything unfolds in the end….

SPOILER WARNING! (Highlight the white area below to see the text)
It’s not until late in the series that the full extent of Koko’s master plan is revealed, and it’s a doozy. Essentially, she aims to become a god who rules over the new world she’s wrought by limiting mankind’s actions. It’s a pretty jarring moment that can instantly change your perception of her, just like it did for Jonah. Hearing Koko rationalize her thought process, Jormungand does actually make some sense, but it still comes across as overkill. But it’s here that Koko’s at her very best. Love her or hate her, she’s probably not going to be easily forgotten. Not actually seeing the aftermath of Jormungand is a little disappointing, but I think leaving it to our imaginations might have been the right decision.

The cast of characters that comprise both seasons is large, but in reality, everything begins and ends with Koko. She’s a classic anti-hero whose complexity and depth make her a fascinating character. It’s really hard not to like Koko, despite the ruthless monster she’s capable of being. She has a certain charisma that jumps off the screen and helps make her likeable (or hateable). She’s not a hero, and not quite a villain, but either way, she’s a great character.

Child soldier Jonah shares top billing with Koko, but he serves as a nice character himself. As a child soldier who’s a trained killer, he doesn’t act like a typical whiny kid (thank goodness). Actually, Jonah is one of the more thoughtful characters and questions his own beliefs at various points, so he’s anything but immature. Koko & Jonah are the most important characters, but there are many others that they share the screen with. It takes a long time (well into the second season) for some of the other members of Koko’s squad to have their backstories explored, so for the duration of the first season, several characters are still somewhat underdeveloped. Eventually, almost all are given time to show that while they are hardened soldiers, they are all unique and have interesting origins. Well, some are definitely more interesting than others, but all in all, they’re a quality bunch. That even includes Koko’s brother Kasper (who’s also an arms dealer) as well. An elite PMC needs capable enemies, and there are plenty to be found throughout both seasons. Whether it’s hitmen, rival arms dealers, CIA spooks, or any number of other opposition; there’s always someone causing trouble for Koko. But at the end of the day, Koko and Jonah are the main focal points, and they spearhead a very nice cast.

Like any good action anime worth its salt, Jormungand is no slouch in the animation department. The many battles and firefights are all fast and furious and do nothing other than paint the series in a positive light. While CG oftentimes deters from scenes in other anime, here, it’s generally a nonissue. The CG is mostly limited in use, but when present, it’s blended in nicely enough that it doesn’t really look that out of place. Overall, there’s just not too much to complain about here.

While the audio is something that doesn’t quite overwhelm you, it’s easy to notice that it’s of a high standard. In addition to the series’ unofficial anthem, there are a few standout tracks that really add to the atmosphere, like this one, for example. Sound effects are also on point, and the voice acting isn’t bad either. So, across the board, Jormungand maintains a consistent level of audio fidelity that pleases the ears.

So where does the yuri fit in here? That would be Valmet x Koko. Valmet is the lone female soldier in Koko’s squad and her personal protector. Given how badass Valmet is 95% of the time, you just know that she must be madly in love with Koko in order for her to turn into such a softie around her. The extent of their relationship isn’t exactly known, but considering that Koko states that she’s spent more time with Valmet than with her own parents (and that she regards Valmet as a sister, a teacher, and something more), it’s easy to jump to conclusions and ship ’em anyway. It ultimately doesn’t amount to a ton of yuri, but seeing such frightening women in a different light is amusing nonetheless. Why say something when you can just show it, right? Even though it’s missing the scenes from Perfect Order—including Koko’s more ‘hands-on’ moments—the embedded video below highlights most of the yuri moments from the first season.

From a yuri perspective, the two seasons of Jormungand leave a lot to be desired. There’s only a single yuri-ish character, and she doesn’t get nearly enough opportunities to shine in that regard. But looking at the bigger picture, there are a lot of other things to like about the series. Frenetic action, good production values, and an intriguing main character all combine to form the basis for what is a highly entertaining action anime. 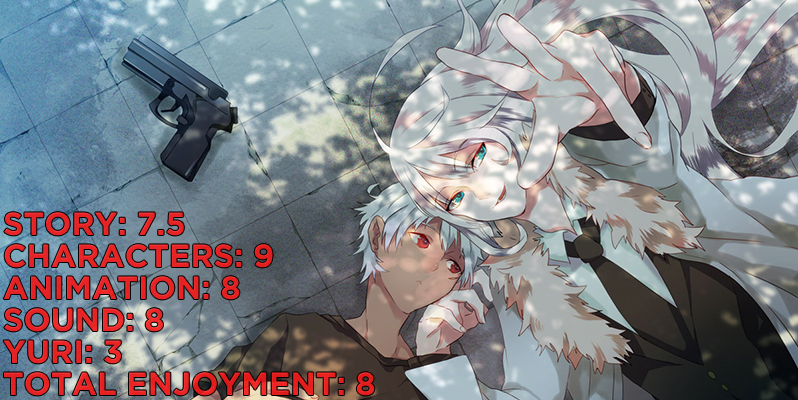