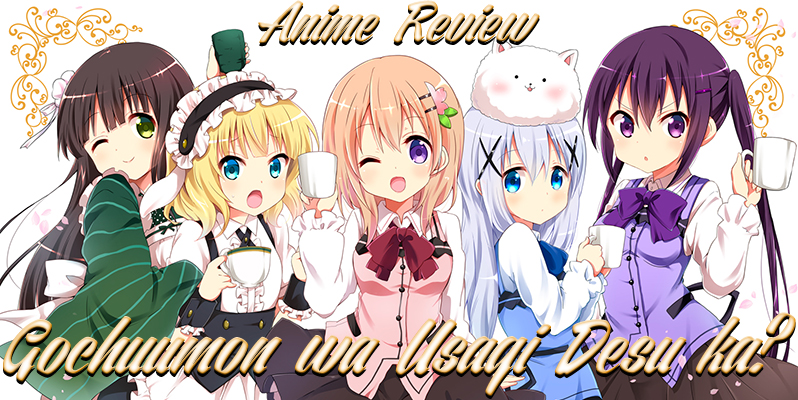 To prepare for the impending return of our favorite batch of caffeinated cuties, let’s take a look back at Gochuumon wa Usagi Desu ka?. As another entry in a long line of moe-driven anime, can Gochuumon possibly be just as addicting and stimulating as a shot of espresso? That answer and more after the jump.

Upon moving to town and learning that her host family are the owners of a rabbit-themed cafe named Rabbit House, Cocoa begins working at said cafe in order to follow the guidelines of the school program she’s involved in. Joining her at the cafe as baristas are Rize, who’s the daughter of a military man and has a penchant for firearms, and Chino, the owner’s granddaughter and the person in charge at Rabbit House. These three handle the day-to-day tasks at the cafe and balance their work with their school obligations.

Switching the main setting from the classroom like you see in most typical slice of life anime to a cafe turned out to be a very nice change of pace that added a little variety to an otherwise stale setting. While this change was indeed beneficial, it didn’t change the fact that this genre just avoids interesting stories in favor of interesting characters. It’s not a bad story, just a very simple one that you’ve likely encountered variations of time and time again. There are a few wrinkles added, but it doesn’t change things enough to make a major difference. Still, what is present is a cute little story that fits in well with the subject matter and allows the girls to do their thing in entertaining situations throughout the dozen episodes. 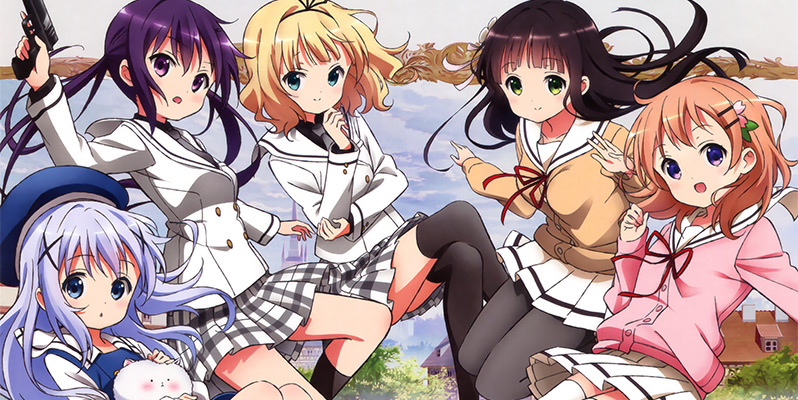 (from left to right) Chino, Rize, Sharo, Chiya, and Cocoa

The quality of the characters is always of huge importance when it comes to slice of life, and Gochuumon excels in this regard. Chino, Cocoa, Rize, Sharo, and Chiya make up a quintet that I feel rivals fellow slice of lifer Kiniro Mosaic. None of the five girls are lacking charisma, and I’d say that they compliment each other very well and are the biggest strength of this show.

If you were to look up ‘cute’ in the dictionary, chances are you’ll find a picture of Chino staring back at you. For my money, she’s easily one of the cutest girls in all of anime. Personality-wise, she’s the closest thing to a grown-up as there is between the five of them, which is kinda funny considering her munchkin size. Cocoa’s a bit of an airhead, but she’s probably the greatest source of comedy amongst the girls, so I think she’s fantastic as well. I don’t feel Rize has quite the same charm as Chino & Cocoa, but she doesn’t get the same amount of screen time as the those two, so I think the creators might’ve felt the same way and went ahead and masked her deficiencies somewhat. Sharo’s definitely not lacking any personality, and in addition to being a yuri character, she’s up there with Cocoa in terms of comedic value. Come season two, I hope she gets more attention paid to her. Chiya adds some calm gracefulness to the show, and since she’s Sharo’s best friend, they have excellent chemistry together. Last, but maybe least, is Tippy. She’s (yes, it’s technically a she) the fluffball of an Angora rabbit that resides almost exclusively on top of Chino’s head. Even though Lena wasn’t exactly a fan… okay, I wasn’t really a fan either, so let’s just move on then.

There are other characters as well, but the five main girls really raise everything up a notch, and it’s really hard not to like them. Having the girls named after drinks you’re likely to find on a cafe menu is a clever touch that went unnoticed by me for the longest time. If a slice of life is only as good as its characters, then that makes Gochuumon very good. Here’s to hoping they get a refill and come back just as strongly as before.

I hate to keep comparing these two, but I just can’t avoid it. They’re like moe siblings to me. Hello!! Kiniro Mosaic came out earlier this year, and from a visual standpoint, my untrained eye would probably give the slight edge to Gochuumon in terms of looks, despite it being a year older. Obviously, the girls are adorable, but in addition to that, the locales are lively and endearing, which continues the charming theme involving this show. Although it doesn’t raise the visual bar or anything, there’s just a warm and cozy ambience that’s easy to enjoy.

Maybe it has a little something to do with the accordion music, but the background music also contributes to the calm and pleasant atmosphere of the series. If you were to imagine what the ideal soundtrack to a slice of life anime should sound like, chances are you’d find that it sounds an awful lot like what you hear in this one. And it’s not just the music that’s nice. The voice acting is also well-done (especially Chino’s), and Aya from Kiniro Mosaic even makes an appearance! Okay, I lied about that. But Aya and Rize share the same voice actress, so Ayaya might as well be there in spirit. All told, the sound doesn’t stray too far from the genre’s time-tested formula, but there’s still plenty to like here.

I’d love to tell you that Gochuumon takes after Yuru Yuri and, to a lesser extent, KinMosa and really embraces yuri, but I sadly can’t do that. There just isn’t all that much yuri happening in this anime. What we do have though is Sharo. She has a crush on Rize, but Sharo’s just too innocent and shy for anything that interesting to happen. There was a little potential there, but their very different personalities prevent anything of note from happening. Just keep your expectations very low, and you might not be too disappointed. In addition to those two, I suppose you could also ship Chino x Cocoa, but I feel that they have more of a sisterly relationship than anything else, so I won’t be doing that. And if you’re really working those yuri goggles, you might get some yuri vibes from Sharo and Chiya, but that’s reaching a bit. Ultimately, it doesn’t amount to very much, but I think that’s one of the few knocks you could level at this show.

Even though I think I’ve grown a bit jaded of the slice of life genre, Gochuumon did a great job of hypnotizing me with its charming girls, relaxing setting, and funny comedy. Considering all of that, it’s not surprising at all that this show was successful enough to receive a second season. Speaking of that second season, it’s right around the corner, so I hope you’re ready for another refill served by our favorite group of moe baristas. 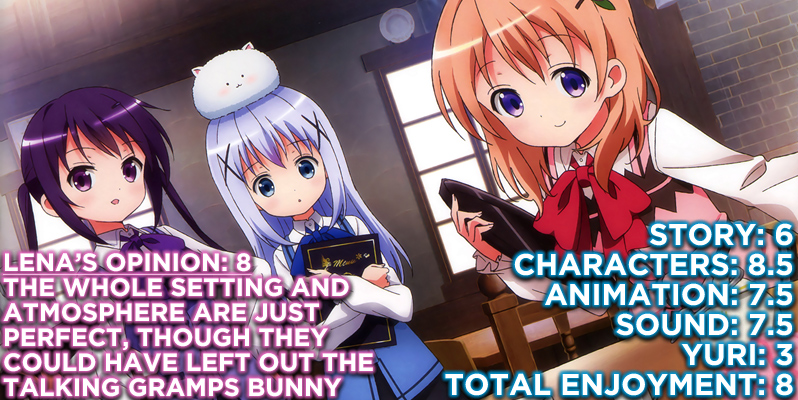