Just as more or less promised in the last “Don’t Know What To Read Next” post, here’s the hopefully long-awaited review of this Manhwa~

Despite the weird sounding title that might lead your mind to some very specific places and one very specific song, this manga—or manhwa—deals with nothing more and nothing less than sex, romance, and sexy office ladies. Quite promising, I know.

The story starts off with newcomer Ju Sungji getting introduced to her coworkers in her new workplace, a game development company. Her beauty and cold initial appearance leave her standing out quite a lot on her first day alone. However, as we’re slowly getting to know her better, we’ll see that that’s not all there is to her. Especially whenever their stern and quite beautiful team manager Sung Sumin shows up, we get to see her act drastically different.

First of all, I seriously need some nicknames for the 3 main characters. Their names are just far too hard for me to keep in mind, and it’s already driving me crazy, so here we go:

Now that we have that settled, let’s get right into my review.

As just mentioned, we only have 3 more or less important characters that regularly appear in each and every chapter. In order to not have to explain it all in great detail, I drew some type of character relation chart that should tell you exactly what is going on between the three women [current status: Chapter 21]. 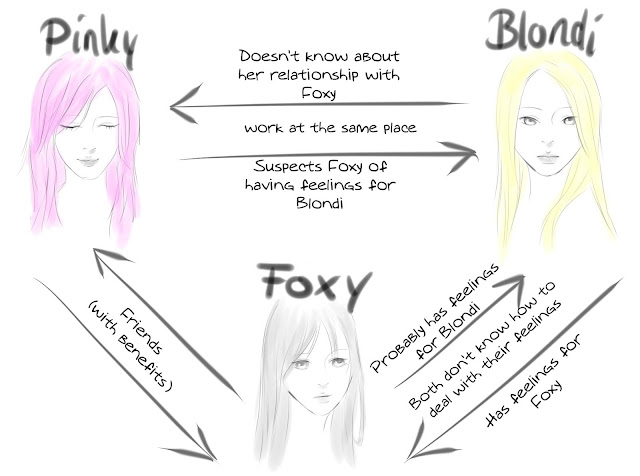 So now that we have cleared up their relations, it’s easy to say where this story is heading. Well, to be quite honest, we already knew from the very first chapter that Blondi and Foxy would get together eventually, but their path is quite rough and sometimes really hard to watch. It often felt like watching Yuzu and Mei interacting, especially since Foxy has such a cold and aloof way of treating Blondi, and probably everyone else. Sometimes, it was almost painful to watch her treat the people she should care about in such a “hard-to-get” manner, as she calls it herself. For me, she just acts like bitch who doesn’t give a damn about anything, but that may be just me….

I often felt like slapping her in the face, simply because I don’t see how it’s appropriate to treat your crush the way she did; constantly putting unnecessary space between them, only rarely really considering their feelings, and even pushing them into doing things they are probably not ready for. No matter how much she’s been through in her life, she should definitely know better than acting like a bitch towards Blondi. Then again, it kind of works, so I guess this really shows that the common saying of “nice guys finish last” might actually be true in some cases.

Well, this kind of relationship is what actually makes this manga as intriguing as it is, and if we now add in Foxy’s ex/girlfriend/sex friend Pinky, it adds just the right kind of spice to make this story go from fairly intriguing to freaking exciting.

Yes, you heard that right, Pinky is simply the perfect addition to this type of story, bringing out some of Foxy’s other character traits, rather than only coldness and aloofness, which shows us that there is actually much more to her. In various flashbacks, we witness her actually acting needy, kind, and even cute; which is definitely something she doesn’t show very often.

It’s a very important part to the story, because without the flashbacks, she would come off as too much of an emotionless jerk. This is actually a big issue I have with this manga. The two main characters, Blondi and Foxy, almost always wear the same kind of expression. You only rarely see them laugh, get angry, or anything else. This alone makes it really hard to see the love that might or might not exist between them, which is – yet again – a big problem for me. Everyone else just seems so full of emotions compared to them. Especially their co-workers and supervisor Pinky come off as way more likable thanks to not looking as stoic as the other two.

This also makes it really hard for me to root them on. I’m actually still not sure if I should really go with that pairing or hope for Pinky x Foxy instead. Hell, I even think that the brown-haired guy that confessed to Blondi (forgot his name) might be a better match for her than Foxy, but I think I should just wait and see how things develop between them.

Finally, I’d like to point out that there is one thing that this manga does better than most, if not all, manga of this kind; it keeps you interested. It’s not just the story and the way it pulls you in, this mangaka seriously mastered the art of putting the porn where it needs to be. If you get slightly bored during one part, there will be a flashback or another type of chance where sex is going to happen, and it’s going to make things intense and keep you interested. Oooor, I’m just a pervert who’s easily
pleased with nice sex scenes. Actually, I think I must be just that….

I have to give the artist credit for the really well-drawn and beautiful faces, especially of the female characters. And I also have to point out that it’s freaking amazing that this work is fully colored, yet it still doesn’t sit well with me. Maybe it’s the fact that most characters look like Korean pop stars. Yeah, maybe that’s it….

Have I already pointed out that this is a manga fully concentrating on yuri sex, sex, sex, and relationships? It seriously never drifts too far apart from the few themes I just named and always throws in the sex when needed.

Well, the sex scenes are not really on the explicit side, but they definitely show more than one would expect. I still remember when I read the first chapter, completely oblivious to the fact that there would be sex. The last scene really surprised me, but in a good way ( ͡° ͜ʖ ͡°)

However, if you’re only looking for a heartwarming love story between two women (like I was thinking it would be at first), this one might not be the right kind of story for you.

First of all, I love the fact that this is not your typical underage school girl meets school girl type of story. This is about office ladies in their thirties, sexy office ladies, that is.

You see, I’ve realized that I’m not 16 anymore (yeah, took me long enough, since I’m now 23), and my interests seem to shift from this typical innocent yuri high school love story to more mature stories, showing how adult characters get together. So this one is quite satisfying in this department.

However, it lacks in others. For instance, you will probably have some difficulties actually liking the two main characters. The biggest problem, however, is the fact that in some points in the story, you pretty much can’t comprehend what is going on anymore, especially whenever there are new flashbacks popping up from out of nowhere.  Well, it’s still an awesome read that you might just need to read an additional time to be able to fully understand.

55 thoughts on “Yuri Manga Review: What Does The Fox Say? by Team Gaji”