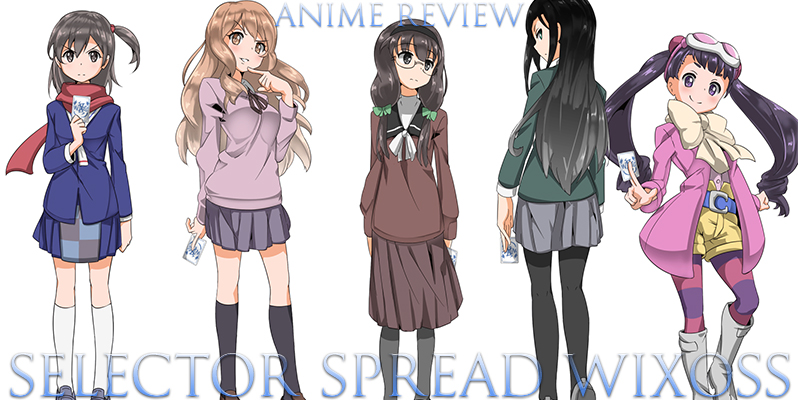 After taking a critical look at Selector Infected WIXOSS, it seemed only fair that the second season, Selector Spread WIXOSS, gets the same treatment. Even darker and more sinister than its predecessor, Spread attempts to make its wish (for a great YuriReviews score) come true, but it doesn’t quite work out that way.

SPOILER WARNING! Highlight the white area to view the text.
The story continues right where Infected left off. Despite her defeat at the hands of Ruuko, Iona has her wish granted, and she has become Ruuko’s new LRIG. Tama has since gone missing, and Ulith has now taken over Iona’s body. Hitoe and Yuzuki remain in their respective positions, as does everyone’s favorite crazy model, Akira. Meanwhile, Ruuko’s on a mission to find out what happened to Tama and to have her wish to save everyone finally granted.

If you thought the first season of WIXOSS was depressing, the greater portion of season two makes it look like Disneyland in comparison. I for one enjoyed the dark ambience, but it was something else entirely that grinded my gears. The major problem I have with the story revolves around Mayu. As the source of the Selector battles, it’s never really revealed how she came to acquire the power to manifest her imaginary world and bring it to reality. That’s a burning question that never gets answered, and for me, it’s a foundation piece of the story that devalues everything else that happened as a result. Who knows, maybe that missing plot point is being saved for Selector Destructed WIXOSS, but not mentioning it leads me to believe that it was just overlooked.

Other than that criticism, I felt as though the story of Spread was more focused on the bigger picture and thus, and improvement over season one. I still had some quibbles, though. Down the stretch, the story felt somewhat rushed, and having such a seemingly happy ending feels so strange, after everything that happened along the way. Mari Okada (anohana, Black☆Rock Shooter, Toradora!) is responsible for the script, and while she’s arguably the best writer in the anime industry, I wouldn’t exactly rank this as her crowning achievement. There are definitely some good ideas thrown around, but I feel that the story could’ve been executed a bit better.

I guess Spread was doing something right, considering if I feel so strongly about a few of the characters. The Bitch Brood as I call them (Mayu, Ulith, and Akira) did their part as engaging—and very hateable—characters; but Ruuko, Hitoe, and Yuzuki failed to match The Bitch Brood’s contributions and all seem so bland in comparison. The remaining major characters (Iona/Yuki, Chiyori, and Tama) all fall somewhere in-between the two extremes. Ruuko was the poster child for all that is good, with Hitoe and Yuzuki acting as her safety blanket. That’s all well and good, but she almost seemed too good to me, not to mention that she lacked the same presence as TBB. Yuzuki was relegated to the sidelines as Hitoe’s LRIG and didn’t play as big a part in the grand scheme of things for season two, which was a big disappointment for me. Unlike Ruuko, Yuzuki showed some spunk and a personality that I found interesting. Hitoe mirrored Ruuko, so I wasn’t a fan of hers either.

For me, Akira was never likeable at any point during the two seasons, so I really didn’t mind watching her descent into madness. Her partner in evil, Ulith, was a psychopath, so disliking her (as a person) came very easily to me. Iona/Yuki was Ruuko’s LRIG for season two, and it was nice to see her eventually come around and befriend Ruuko, since The Bitch Brood was already at full capacity and couldn’t afford another member. She became more likeable, and I have to say, I probably began liking her more than I liked Tama in season one. Chiyori was the comic relief that served to lighten the mood in this gloomy anime. She was eccentric and amusing, but also very annoying. That said, I can’t deny that I was a fan. Last, and perhaps least, is Mayu. Yeah, it’s sad what Mayu’s life was like being trapped in that room, but I just couldn’t bring myself to feel any sympathy towards her at all. She shared too many negative character traits with Ulith for me to feel bad for her. She may have seemed detestable, but as far as antagonists go, she was still a quality one.

So if you’re the type of person who loves really twisted characters, you’re likely to love Spread. There are different flavors of evil girls, and in an anime like this, that’s kind of expected. I personally preferred the bad girls, but overall, I think Spread improved the quality and showed more of the characters than Infected managed to do.

Seeing as how Spread came mere months after Infected, it’s no surprise that the animation quality remained largely unchanged. The battles themselves still look fantastic, the alternate dimension associated with WIXOSS includes some nice surreal designs,… and everyone’s noses still look terrible. In short, if you thought Infected looked fine, there isn’t anything here that’ll make you think Spread doesn’t look just as good. If anything, it appears to be better.

Aside from the occasional dubstep track during battles—which felt strangely out of place—the audio is quite good and is an improvement over Infected, in my opinion. With the mixture of fitting music and commendable performances by The Bitch Brood’s seiyuu’s, I’d say audio is yet another avenue in which Spread has the upper hand on Infected. 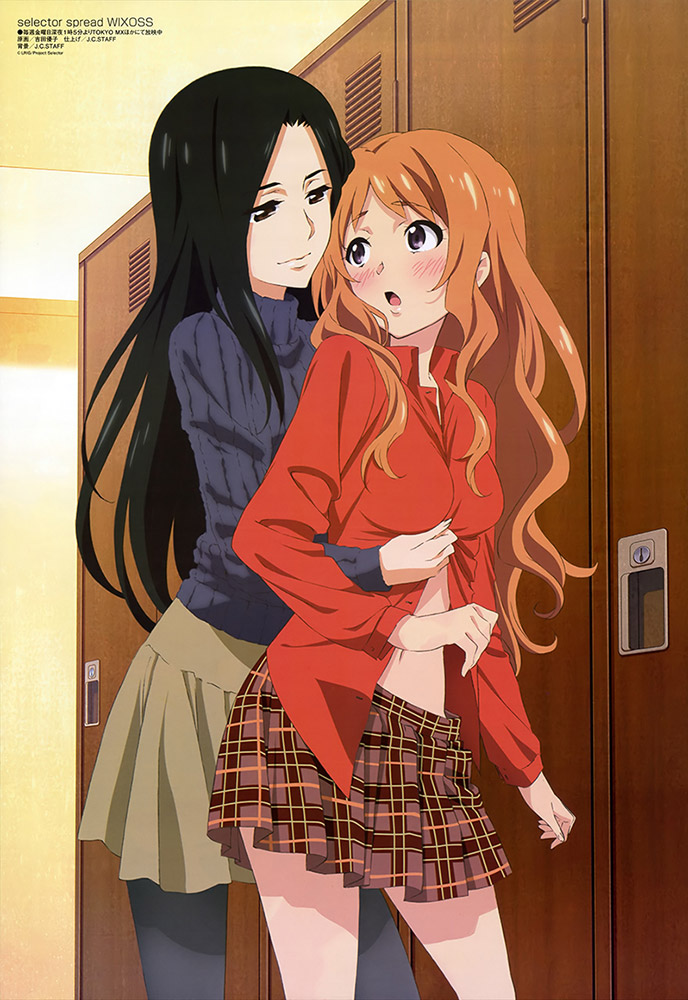 Whereas Infected was lacking any meaningful yuri, Spread manages to change that, but in a way that’s probably not what people were hoping for. Then again, it’s only natural that in the messed up world of WIXOSS, we get the even more messed up relationship between Ulith and Akira. Basically, Akira is obsessed with Ulith, despite being psychologically tormented by her. Ulith just uses Akira to further her goals, then she proceeds to mentally break her. It’s just an ugly situation that cancels any positive effect the thought of yuri might’ve had. If Ulith was a lot more stable, they could’ve formed the most amazingly evil pairing ever, but as it stands, it’s only a deranged version of unrequited love.

Iona/Yuki’s distorted admiration of Ruuko should also be noted here, but that eventually turns into actual friendship, so either way, that’s not really the best example. People can say any yuri is good yuri, but this series really challenges that idea by taking what should be a lovely thing and turning it into something that you’d probably rather not see. At least that’s how it was with me~

If you can overlook some plot hiccups and the very dreary atmosphere, a further deconstruction of the card battle genre is awaiting you. There happens to be an upcoming WIXOSS movie set for February 2016 (the aforementioned Selector Destructed WIXOSS), but after 2 seasons and 24 episodes, my interest has waned enough that I’m not really excited anymore. 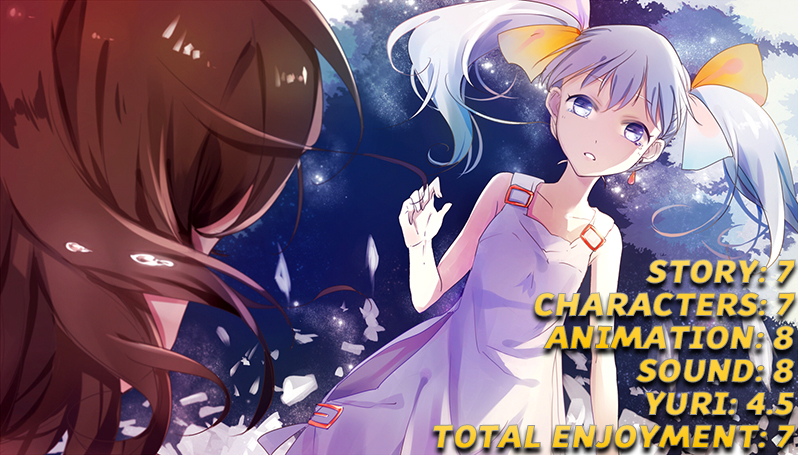