Originally based on an eroge visual novel (with a very different plot), Yami to Boushi to Hon no Tabibito centers around a magical library that houses individual worlds within each book. That sounds a little bit like one of those literacy campaigns that tries to encourage kids to read, but no, it’s just a plot device in a mediocre yuri anime that misses the mark.

To me, the story was the biggest problem with this anime. The idea of traveling to different worlds is interesting in a way, but either not enough time is spent fleshing out the details of that world, or that particular world just isn’t all that compelling. For me, it was definitely more of the latter. Sometimes, it feels like the world-jumping is just filler content that doesn’t play a major role in the narrative. To make matters worse, the old “our princess is in another castle” trick is used ad nauseum, and it gets tiring fast. There isn’t anything enjoyable about being led through a labyrinth of mostly uninspired scenarios that do a poor job of explaining who these people really are and why these things are happening to them. Oh, and the ending sucks. That had to be said. In conclusion, it’s easy to see that telling a good story wasn’t high on the to-do list of the creators, if it was there at all. It’s not the worst story ever told, but it’s hard to pinpoint exactly what this anime does right in that regard. 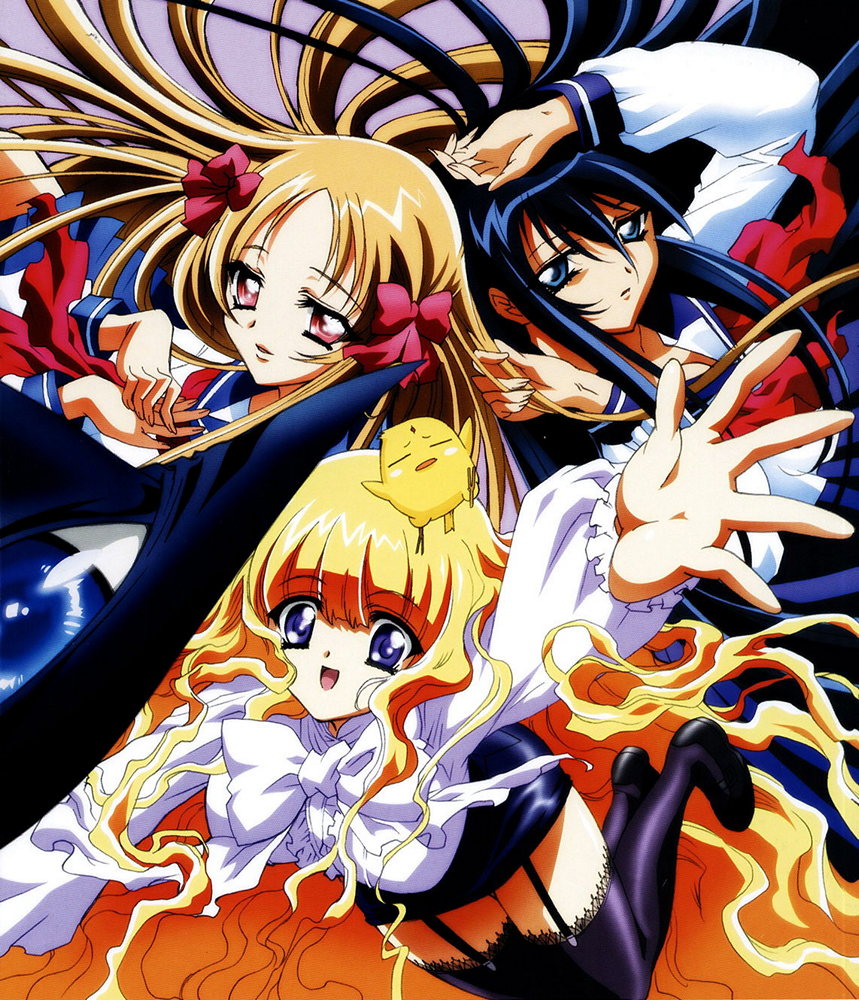 Given how lackluster the story was, you’d hope the cast of characters would be memorable and help redeem the show, but I can’t say with any certainty that that was actually the case. Well, Hazuki was a pretty nice character, but I didn’t feel that her supporting cast fared quite as well. I think at least some part of this can be attributed to the fact that there’s a revolving door of characters that drop in for a minute, then are quickly forgotten about when we move on to another world.

Youko and Milka are a couple of examples of interesting characters whose screen time was over too quickly, in my opinion. Then there are the characters who hang around for a while, but are just meh. Lilith and Hatsumi aren’t so bad, but others like Gargantua (and most of his contigent) long overstay their welcome in my eyes. Taking the time devoted to him and using it to better expound upon Hazuki and Hatsumi’s relationship would’ve been a much better alternative to what we ended up getting, but I digress.

Hatsumi (Hazuki’s adopted sister), doesn’t say much at all, which limited her appeal to me. She seems like a sweet, innocent girl, but unfortunately, there isn’t exactly a lack of those going around. Looking elsewhere, the comic relief comes in the form of a few characters, namely Ken and Lilith. They’re equal parts entertaining and annoying, though Lilith’s yuri-ish tendencies do raise her stock a bit. All in all, Hazuki is the lone character who left a positive impression on me. The others were an assorted mix that ranged from okay to bad (I’m looking at you, Gargantua).

It’s been a dozen years since it was released, but if you can get past the old-school character designs, Yamibou was actually a fairly nice-looking anime, back in its heyday. Yuri anime mainstay Studio Deen (MariMite, Sakura Trick, Simoun) are at the helm, and they managed to produce a sharp-looking anime that isn’t lacking in detail or charm. With Hazuki and her sword emblazoned all over the promotional art, you’d think there would be a ton of dazzling action scenes, but that’s not really the case. Despite that, the emphasis on shading is evident, and it plays a big part in making this a pleasant experience for the eyes.

Like many of the other elements of this anime, the audio is decent, yet unremarkable. Whether it’s the average to slightly above average voice-acting or the music that has its moments, but doesn’t stand out as being especially memorable, the quality is enough to warrant a respectable rating, but not high enough to garner much more than that. The same can be said of the OP and ED themes, since after one or two episodes, my desire to skip them was just too much to resist. All in all, there really wasn’t anything that stood out as particularly noteworthy or very different from your standard anime.

From the get-go, the yuri arrives in grand style. Hazuki walks in on Hatsumi taking a bath, and Hazuki’s already strong feelings towards Hatsumi are sent into overdrive. This may sound extremely promising from a yuri perspective, but that momentum isn’t sustained. There are still some sweet moments between the two, but there could’ve been so much more. That’s the heartbreaking thing about this anime. It squanders a perfect chance to make up for the bad story with some great yuri, and it doesn’t capitalize. I should also quickly mention the hetero angle present at a few points in this show. It’s only briefly touched upon, but it’s definitely there. That’s like adding insult to injury. In short, Yamibou can’t manage to get out of its own way and bungles what could’ve potentially been a great yuri relationship.

Yamibou has some redeeming qualities, but the disjointed and inane story is a major problem that cancels out the positives and keeps this as nothing more than a barely tolerable yuri anime that could’ve been better.

16 thoughts on “Anime Review: Yami to Boushi to Hon no Tabibito”