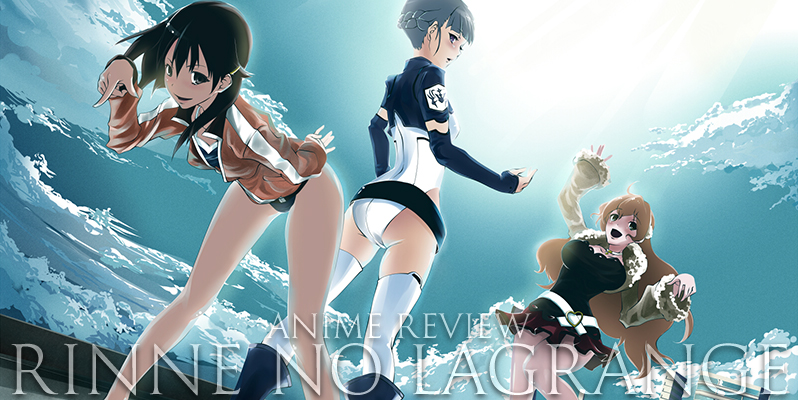 I don’t know if you’ve noticed, but YuriReviews is conspicuously short on mechas, so enter Rinne no Lagrange to help aid in that shortage. An interstellar war story with the battle for control of three legendary weapons at the heart of the struggle, it may sound like nothing but an action-fest, but is there enough comedy and interpersonal drama to appeal to those who might initially be put off by the idea of giant fighting robots? Let’s find out~

After a swift and sudden shove into a war she didn’t have a choice but to enter, Madoka Kyouno and her Ovid, the Vox Aura, become the last line of defense against enemy forces that are seeking control of the Aura for themselves. Alright, the story doesn’t stray too far from established sci-fi tropes, but it all works out well enough. There are times when things seem a little confusing and like they’re not explained sufficiently, especially with lightly touched upon characters (like Yurikano) and the greater scope of the war, but that’s what I imagine the second cour will clean up. As it stands, we get a simple story, but one that seems to have much more happening than we get to a chance to see. That’s a disappointment, but once again, the second cour will hopefully do a better job with that. What wasn’t disappointing was learning of Madoka, Lan, and Muginami’s past. Their backstories are explored, which not only fills in some of the cracks in the story, but also helps build a better understanding and appreciation for the three of them. So the story is rather generic, but it’s not all bad, as the action, comedy, and fluff manage to keep things interesting. 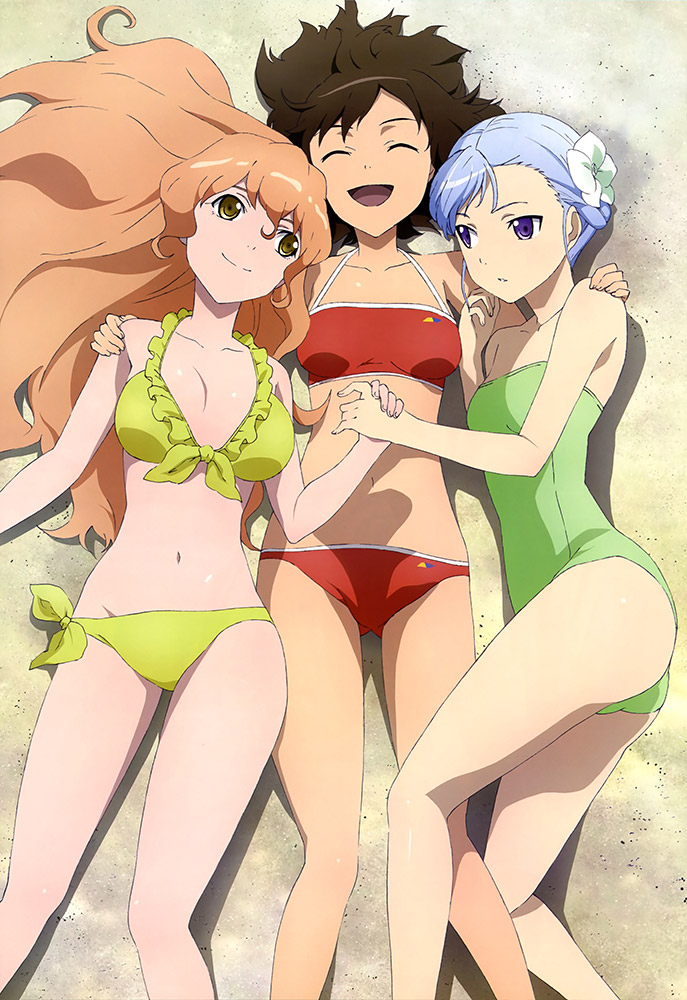 Okay, so the story was so-so, but the cast of characters was a bit better, in my opinion. Madoka is the main character in the show, and she’s a good one. Due to a tragic event in her past, she comes to gain a sense of responsibility to help others that’s seen throughout the series. Whether it’s helping other clubs at school or piloting giant robots to help save the world, she’s always up to the challenge. That determination and ambition often gets her into situations where her personality is able to shine through, with her sense of humor being chief among the reasons why she’s so likable.

Moving on, Lan gets Madoka involved in the ongoing war, and aside from her duty to protect Madoka, her personality is completely different, yet it meshes very well with Madoka’s. Her serious nature combined with how unaccustomed she is to Earth culture, leads to perhaps the cutest thing in the entire show. Last and least (to me anyway) is Muginami. Mugi is Madoka’s other comrade, and unlike Lan, she was a bit more of an acquired taste for me. This stemmed from her extreme loyalty towards Villagiulio, even when he’d treat her like scum. Other than that, she was still likable (especially after learning her backstory), but she’ll forever remain in third-place among the three Voxes.

As for the supporting cast, there are colorful characters like the aforementioned Villagiulio, his pals, Array, Izo, and Kirius, Asteria, Youko, and several more that add somewhat to the enjoyment. However, at the end of the day, Madoka, Lan, and Mugi are the main reasons why it’s easy to come to like the characters. If I had to use one word to describe Rinne no Lagrange from a visual standpoint, I’d say it’s vivid. The environments are often fantastic, and other things like character designs, mecha design, and the mecha combat also contribute to the healthy amount of eye candy on display. You could probably nitpick and point out some scenes where the animation is rather subpar, but by and large, this is a nice-looking anime.

Whereas the animation had moments where it made a great impression, the audio didn’t quite reach that level for me. There’s nothing wrong with the large amounts of electronic music used throughout, but there just wasn’t anything too memorable that made me want to seek out the soundtrack. Aside from that, the voice acting was fine and sound effects were standard fare. All in all, the audio wasn’t bad by any stretch, but it also wasn’t all that different from the boatloads of other sci-fi anime you can find out there.

I’d love to say that there’s a deep and serious yuri relationship at the heart of Rinne no Lagrange, but that’s not the case at all. What you will find however, is just some subtext between Madoka and Lan. Lan’s main priority is ensuring Madoka’s safety, and when Muginami enters the fold, Lan senses a (love?) threat and keeps a watchful eye on Mugi. So thanks for that, Mugi! Your presence helped bring the two of them closer together. Now that’s nice and all, but I was honestly expecting more. You could probably even argue that Madoka and Lan’s relationship is nothing more than a strong friendship, and I wouldn’t necessarily disagree. Madoka’s great to both Lan and Mugi, but I’d say it’s Lan that gives off the majority of the yuri vibes. Anyway, you can probably tell by the yuri score that there’s only a modest amount of yuri, and we’re left with a few missed opportunities.

Overall, Rinne no Lagrange is a decent anime with some solid action, quality characters, a good mixture of drama and comedy, and also a minor amount of yuri subtext. I wouldn’t say there’s anything particularly special about it, but especially for yuri fans who also enjoy mecha anime, this is a worthwhile diversion. 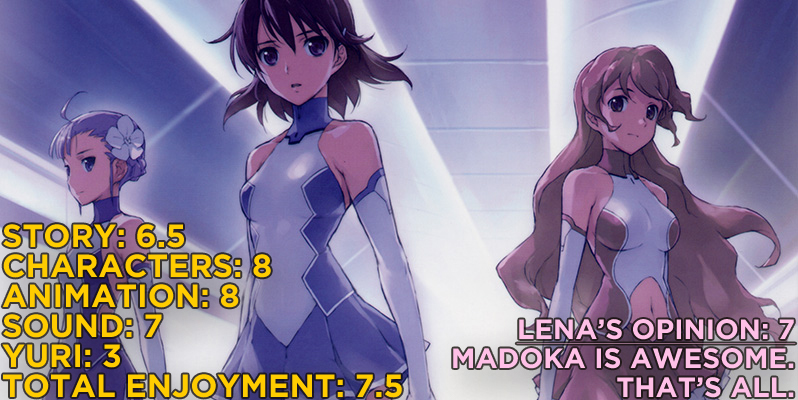