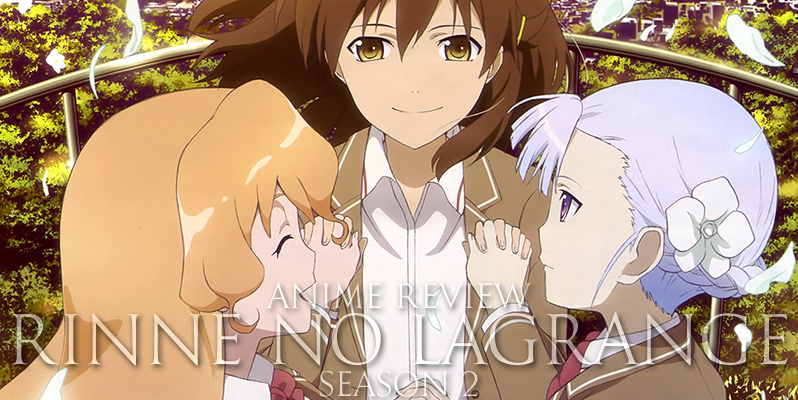 This mecha drought of ours is nearly at an end, thanks to this review of the second season of Rinne no Lagrange. Honestly, I’m not the biggest fan of mecha anime. Gundam, Macross, and others just don’t seem like my cup of tea, but RnL showed me that mecha anime isn’t quite as bad as I imagined. That doesn’t automatically mean I’ll give it a good score, but it’s a positive start. Hey, baby steps, people!

During my review of the first season, I opined that the story was rather simplistic and small in scope. Thankfully, that’s not the case at all this go around. A greater emphasis is placed on the ongoing conflict between De Metrio and Le Garite and those involved, especially Villagiulio and Dizelmine. Madoka & Co. are still doing their thing, but unlike the first season, the story doesn’t solely revolve around them. Some might view this development as unfortunate—and I can completely understand that—but it is nice to know why these factions are fighting and have a better understanding of everything that is going on.

The twists and turns in the story are there (even though I didn’t find them that surprising), and more light is shed on the tragic events from the past that threaten to repeat themselves. I found the pacing to be an slight issue at times, as there are lulls in the action and drama that slow things down considerably, but Madoka and the girls usually get more screen time during these moments, so it kind of evens itself out. My biggest gripes about the story from the first season have mostly been addressed, but even though I wouldn’t call it great by any stretch, I think the story is still an upgrade over what we had previously. 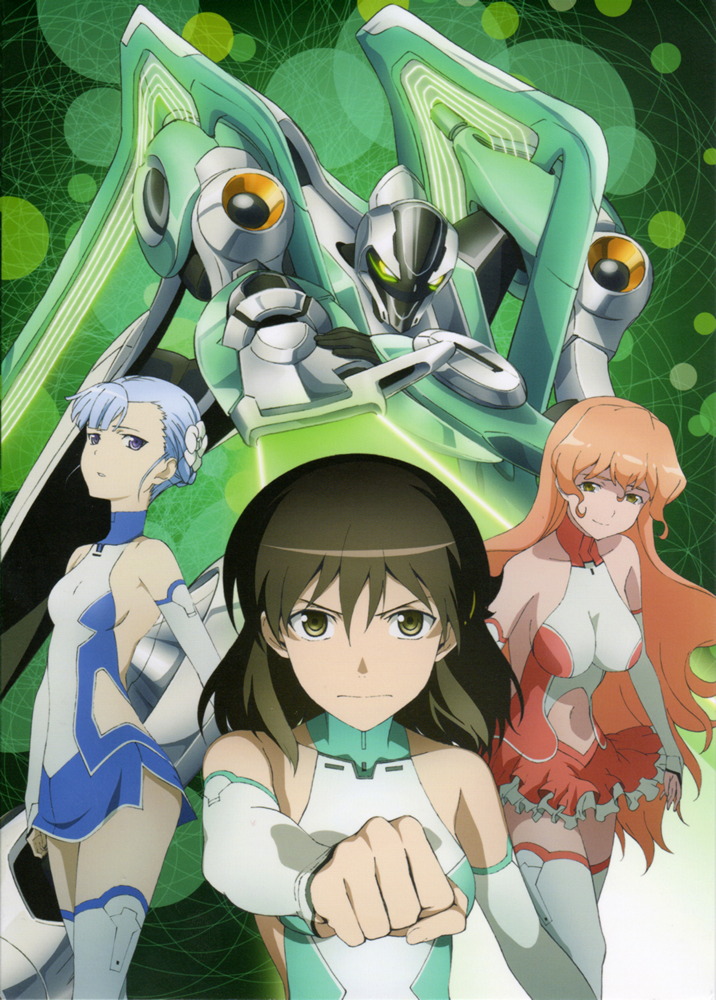 Since the time was taken to further enrich the story, there’s less screen time for the three Voxes, yet there still happens to be more character development than there was in the first season. Everyone from season one is back, and they’re just as likable (or unlikable as before). From the very first episode to the last, you can sense the growth of some characters, which is always great to see in any anime. It seemed like almost everyone other than Madoka, Lan, and Mugi saw an increase in screen time, but even though there are plenty of good and interesting characters, I still found myself wanting to see more of the main girls.

You have a few characters that you might hesitate to call “good”, yet they don’t seem bad enough to be called evil. This moral gray area lends some added depth to the characters that makes them seem more appealing and someone you want to either root for or against. So, if you’re a big Madoka/Lan/Mugi fan, they still have very major roles in this season, but other characters play more important roles than they did before and generally make the cast seem more well-rounded and complete, in my opinion.

Compared to season one, it feels as though there isn’t quite as much mecha action happening this time around, but don’t let that fool you. Hot robot-on-robot violence is still the cornerstone of the eye candy, and every colorful explosion takes the vibrance level up another notch. Even more than season one, landscapes are something that really struck me as being especially eye-catching and beautiful, reminding me a bit of Shinsekai yori, for some reason. More of a good thing is never bad, so even though there doesn’t appear to be anything technically different from the first season, being easy on the eyes is always appreciated.

With the increase in drama comes an increase in dramatic music, and even though I wouldn’t necessarily say it was a huge improvement over the previous season, I think there’s a little more to like here. What I did enjoy much more than last time were both the OP and the first ED (shown above). Those two are just some fun and feel-good songs that it’s impossible for me not to like. As for the second ED… yeah, I could’ve done without that, but 2 out of 3 ain’t bad! The voice acting benefits from more dramatic performances brought on by the increase in drama, so that’s another positive worth mentioning. Overall, while I can’t say that there are major audio differences from before, you don’t get the sense that anything is particularly bad or not quite up to snuff. 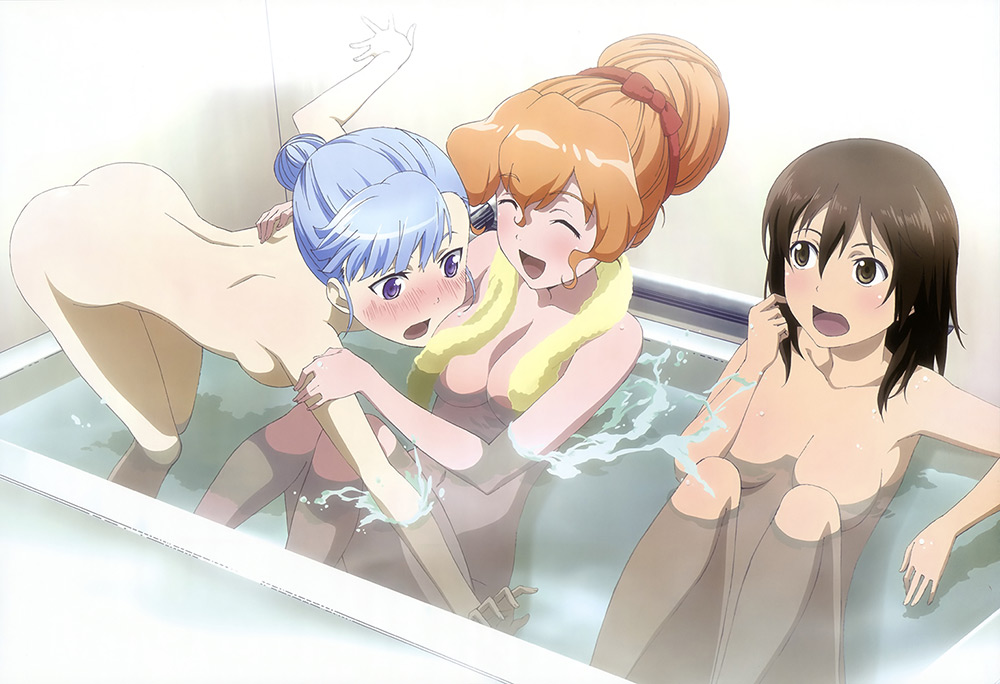 There is a bath scene, but nothing like this happens. 😦

On the yuri front, I have some good news and some bad news. Let’s start with the good news. For those who were wishing the girls would lock lips at some point, your wish came true! There are literally forced kisses between Madoka x Lan, Madoka x Mugi, and Lan x Mugi where the odd girl out would force their faces together into a kiss. Needless to say, this wasn’t quite what people had in mind, but be careful what you wish for, I guess. Now, on to the bad news. I’m sure this could probably be debated, but to me, it felt as though there was even less yuri this season. The strong bonds that were forged between the three girls over the course of the first season don’t progress any further and remain strictly in “friendly” territory. Unless you’re the type of fan that can twist any non-hateful female relationship into yuri, I think it’s clear that strong friendships are all that exist between the girls, so don’t have your expectations set too high for any signs of potential romance.

Even though most of my scores haven’t changed, I can definitely say that I preferred this season over the first. A lot of the things that made the first season enjoyable are back, along with a more focused story that manages to better exemplify the situation at hand. Yes, the yuri may have fizzled out, but that aside, I’d say Rinne no Lagrange Season 2 remains a slight improvement over season one. 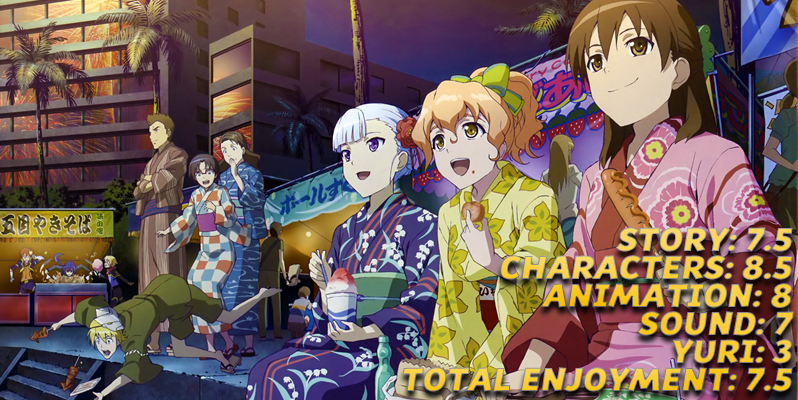