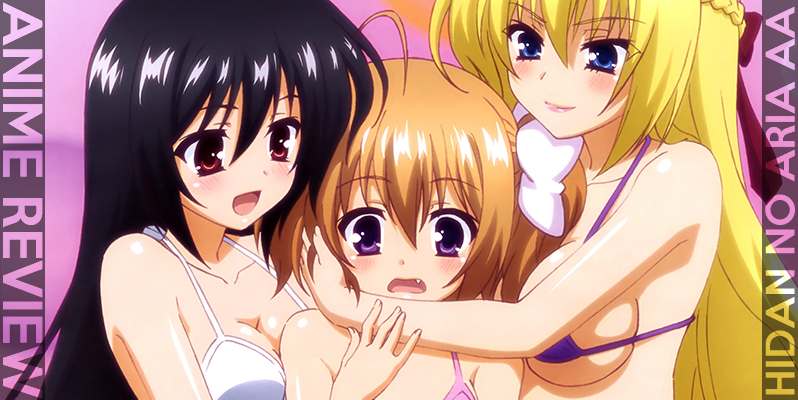 Overshadowed this season by the likes of Yuru Yuri and Valkyrie Drive, Hidan no Aria AA seems like the forgotten yuri anime. Don’t let that fool you, however. This anime very much deserves the yuri tag, but is that enough to overcome all of its other shortcomings?

Set in a high school that trains its students to become butei, armed detectives, Akari Mamiya is a first year who aspires to be the partner of the top-ranked butei in the school, Aria Holmes Kanzaki. The only problem is that Akari is a low-ranked student who failed her rank test and finished dead last in shooting training! Believing everyone should be given a fair chance, Aria gives Akari the opportunity anyway, and through a crazy twist of events, Akari wins the right to be Aria’s assistant and train under her.

I’m probably not alone in saying that I never watched the original Hidan no Aria anime, nor read the light novels or the spinoff manga that this anime is based on, so I don’t know if this is an isolated incident or if a bad story is just commonplace for media in this series. Yes, the story is definitely the weakest link of this anime. During the first two-thirds or so of the season, the story still has a playful tone and it doesn’t seem terribly bad, but it’s down the stretch when the tone of the anime becomes more serious that you really see how much this show is lacking a competent story. As a comedy/slice of life without much story, this would’ve been fine, but once that fluff goes away, we’re left with drama and conflict that feels third-rate and like it was simply thrown together haphazardly. Akari’s backstory is absurd, the entire setting is far from believable, and when it seems like the tension has come to an end, the “end boss” comes out of nowhere and drags you back in for more. Long story short, there’s the enjoyable (yuri filler) and bad (everything else) parts of the story, but as nice as the yuri portions are, they ultimately get pushed aside in favor of something worse. 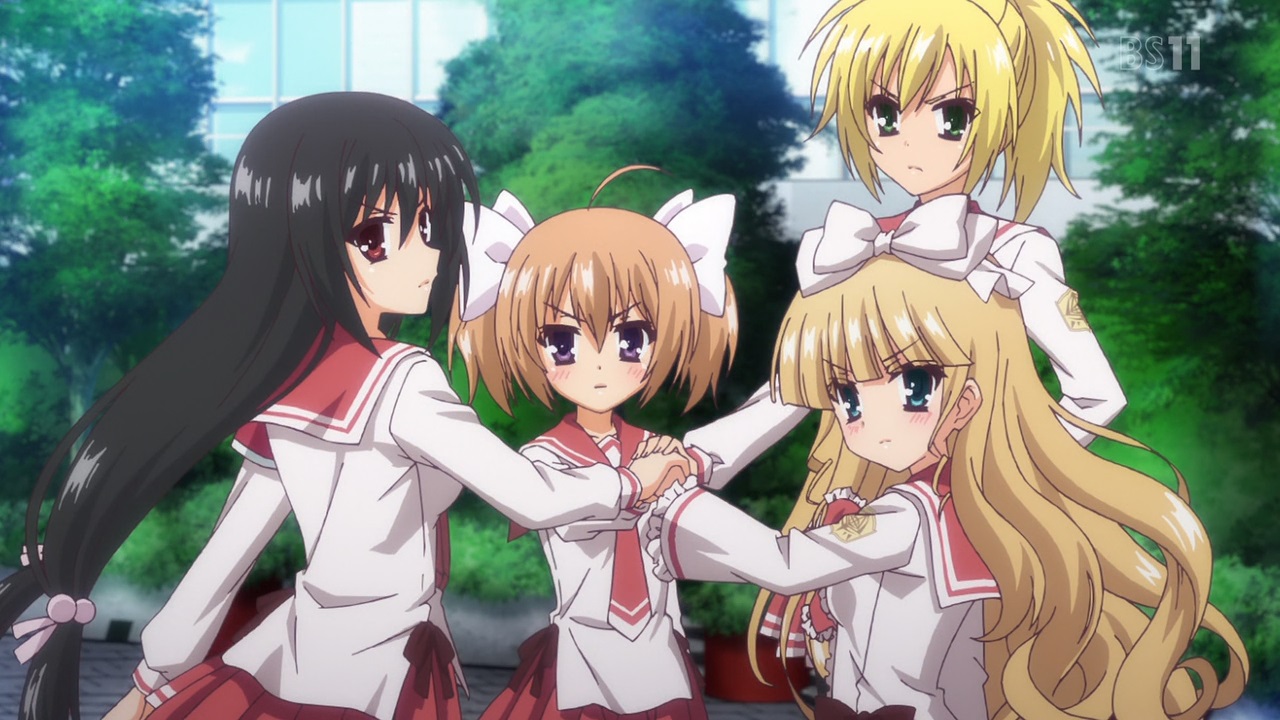 Now, as bad as the story was, the characters (as well as the yuri) make it far more bearable. I don’t think it’s a coincidence that the yuri characters in this anime are all more entertaining than the ones who abstain from girls’ love. Aria, Nonoka, Fuma, Reki, Riko, Kyo; they’re all mildly interesting in some form or fashion, but it’s Shino, Urara, Raika, and Kirin that steal the limelight and make this worth watching. It’s really a close call between Shino and Urara as to who’s my favorite character, but as much as I love the idea of a yandere-turned-loveable-pervert, I’ll give the edge to Urara. She has it just as bad for Akari as Shino does, but she’s just more upfront and honest about it. Either way, they’re great yuri rivals and are easily 1-2, in my book.

Every yuri anime could use a tomboy x loli pairing, and Raika x Kirin is Hidan no Aria AA‘s version. Raika’s a bit of an innocent bystander in all of this, but Kirin makes up for that, even if she can be somewhat grating. On the other end of the spectrum is Aria, who just comes off as dull to me. And when she’s not fawning over Aria, Akari’s no different. It’s a weighted scale that strongly favors the yuri characters, with the others dragging down the score to only a slightly above average level.

For an action anime airing in 2015, Hidan no Aria AA is visually underwhelming, to say the least. At no point was I convinced that this resembled anything close to a good-looking anime, and you could probably find several yuri-ish anime over the last few years that look better than this. I don’t want to beat a dead horse too much, so let’s just say that next to the story, this was the biggest issue I had with this show.

Other than a solid OP, the audio in general was something that didn’t leave much of an impression on me. The background music is mostly forgettable, the voice acting is about what you’d expect, and there isn’t anything that stands out and makes you pay special attention. This could be considered an improvement, based on how uninspired some of the other elements of this show are, but it doesn’t change the fact that there was still plenty of room for improvement. 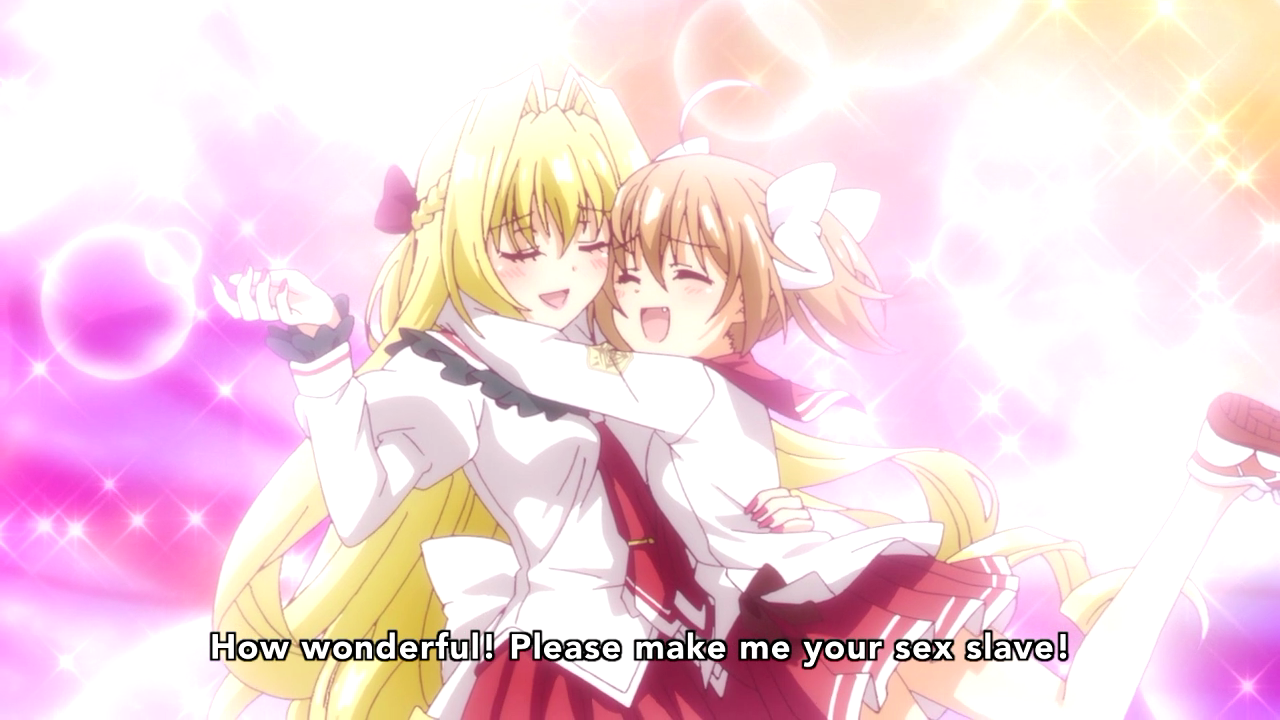 Now that’s a girl that knows what she wants!

Thus far, almost everything has been average at best, but here comes the yuri to save the day. It really is what saves this show and makes it surprisingly enjoyable. Whether it’s Urara hoping to “deepen her friendship” with Akari (i.e. sexually assault her) or Shino hoping to do the same, the dynamic between the three of them was easily the most enjoyable part of the whole anime for me. Just pure, unadulterated yuri nonsense, that’s when this show was at its best. Also making things interesting was Raika and Kirin, but it’s Shino and Urara who really set the tone for what type of yuri show this is. Of course, there’s no serious romance, but the comedic yuri was enough that I didn’t really mind the fact that there aren’t any kisses. The power of yuri is on full display in Hidan no Aria AA, now if only more creators would follow suit and pyurify (<— See what I did there?) their anime like this series has done, there might be less bad anime roaming around.

If you’ve ever wondered if yuri could singlehandedly salvage a bad anime and at least make it tolerable, look no further than Hidan no Aria AA. The story is bad, the animation isn’t good, and the sound is average at best, but it does have boatloads of yuri that, while lighthearted, makes this show far more entertaining than it has any business being. Without the yuri, this would be a complete waste of time, but as it stands, this is a subpar anime that only yuri fans could love. 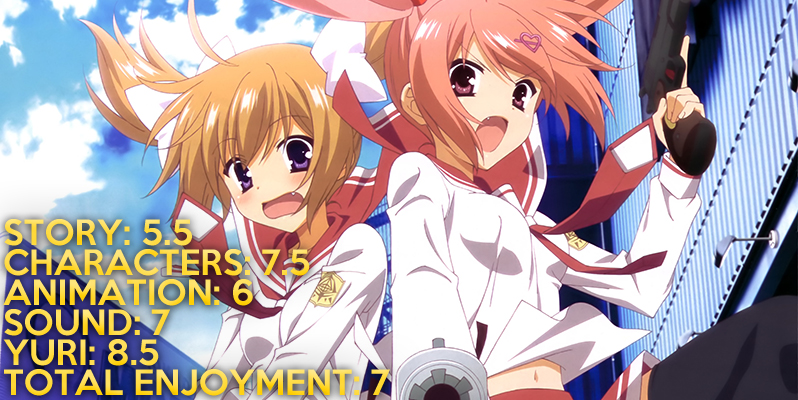