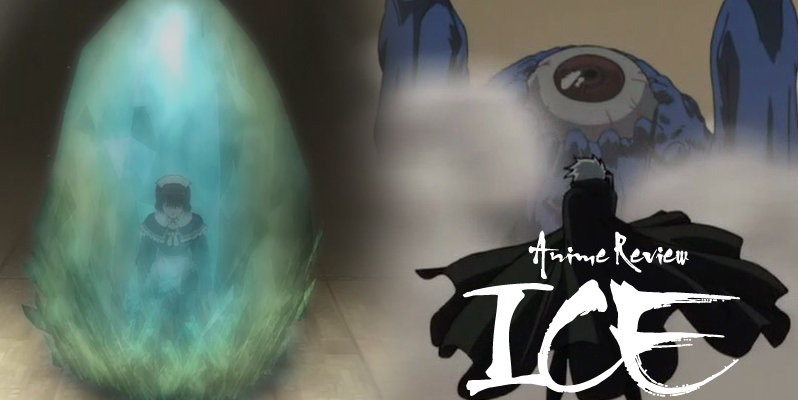 I’m sure Ice was on absolutely no one’s “to watch” list, but leave it to YuriReviews to take one for the team and watch it so you don’t have to. With a premise that sounds like it belongs in a low-budget straight-to-DVD movie (uncoincidentally, this OVA did come straight-to-DVD), it can’t possibly be any good, can it? I’d love to create a hint of suspense here, but I just can’t. It’s not good at all. But how bad is it, really? Let’s find out~

In a future devoid of men, women are left with a slowly dwindling population due to an inability to further propagate the species and numerous natural disasters. Contamination of the flora and fauna keeps humans from feasting on nature’s delicacies, and scientific research into alternative means of conception is expedited, despite being a point of contention among the survivors. Bioterror incidents are now cropping up and are threatening to hasten humanity’s demise, unless those remaining take firm action….

By now, you’re probably thinking that this either sounds great or it sounds terrible, but by the time the credits roll, it’s extremely hard to think of the story as anymore more than a huge failure. Things start going downhill fairly quickly and continue until it starts to feel like a bad joke. So much is left either unexplained or very poorly explained that you’re left to guess as to what the creators were thinking when they made this. Whether it’s the monster fighting, surreal conversations involving Hitomi, or various other apparent plot holes; it’s obvious that the story is the weakest link here. And it’s understandable that Ice takes itself very seriously, but given how lackluster the story is, that’s kind of humorous and kind of sad at the same time. Clearly, not enough thought was put into bringing all of the disparate elements together into something that’s remotely comprehensible, and as a result, Ice is a prime example of what NOT to do while trying to tell a quality story.

Hitomi, the captain of the Guardswomen, is the protagonist, and I thought she was one of the only characters who was likable. She’s the dark and brooding anti-hero of sorts who’s got a cheerful disposition (not) and is by default the best girl. Yuki Ice-T (that’s seriously her name) is an adopted daughter of Lady Kisaragi who crosses paths with Hitomi, which incites the Guardswomen and Kisaragi factions even further.

Kisaragi Ice Cube (okay, that’s not actually her name) is mysterious and intriguing, and she’s one of the better characters, in my opinion. Perhaps the last character who left any kind of impression on me was the commander of the Guardswomen, Julia. She’s at the helm of the ongoing scientific research, and she’s a somewhat unlikable woman who does things her own way. Other than those characters, almost all of the others don’t leave much of an impression. They’re just there without having much of a personality or a good reason for being. Character development is nonexistant (which isn’t surprising, given the short duration), and the handful of characters who aren’t undeveloped still remain underdeveloped, existing as lifeless versions of tired stereotypes.

A post-apocalyptic setting sounds like a great idea, but Ice doesn’t spend much (if any) time showing the aftermath of man’s extinction and humanity’s subsequent fall from grace. That’s a big disappointment and negates the whole idea of having such an interesting backdrop in the first place. 2007 was the year this was made, but it’s visual style would make you believe that it’s a bit older than that. Time has not been kind, but watching this in 2015 makes it hard to properly assess how underwhelming the visuals really are. There’s the occasional gory (and somewhat comical) scene as shown above, yet for an anime with the action and military labels, I figured the action would be better than what it is.

The first thing that needs to be mentioned in the Sound section is how several AKB48 members are involved in the voice acting. I didn’t even learn this until after I watched it all, so I guess they weren’t too terrible. Wait… one of them voiced Yuki. I take that back, I guess it was that terrible after all (Yuki may be voiced by the worst seiyuu I’ve ever heard). Their record producer is actually the original creator of Ice, so make of that what you will. The OP/ED theme is also performed by AKB48, and it’s a fitting song, but nothing that was too memorable for me. Moving on to the rest of music, it’s actually really great… compared to the story… which is very bad. By normal standards, I don’t think the music is actually great, but it is a very decent effort that stands out a bit more, thanks to the quality (or lack thereof) of the other elements.

For an OVA anime with a premise as estrogen-filled as this one, there surprisingly isn’t very much yuri at all. Aside from Julia’s hijinks with her servants (which go unseen), and talk of “free love” relationships among the House of Kisaragi women, the only actual yuri to be found is the unlikely friendly relationship between Hitomi and Yuki Ice-T. Yuki Ice-T’s (I’m gonna keep saying her entire name) upbringing in the House of Kisaragi leads her to want a more “friendly” relationship with Hitomi, but Hitomi isn’t open to that idea. They remain somewhat close throughout the series… and that’s about all. Oh, and Yuki does get beat up by her sister for having feelings for Hitomi. Almost forgot about that. Anyway, only a few slight hints of romantic interest on Hitomi’s behalf exist, but nothing remotely serious. I’ll admit that due to our patented Yuri Rating System, the yuri score should probably be higher (due to the “romance” between the main characters), but I can’t justify giving it a much higher score than I did. All in all, the yuri felt uninspired and like it was there just to add to a list of bullet points.

Ice isn’t Mars of Destruction-level bad, but naming very many positive attributes is kind of a difficult task for me. A bad story, mostly bland characters, average-at-best production values, and yuri that’s phoned in all combine to make Ice the equivalent of lumps of coal in a Christmas stocking.