There are certain anime scenes that are hard to forget, that simply never fade from your memory, and that you go back to watching every so often. These scenes usually leave you with a nice feeling and make you all excited for more. And these are exactly those anime moments that I’d now like to collect and share with you. 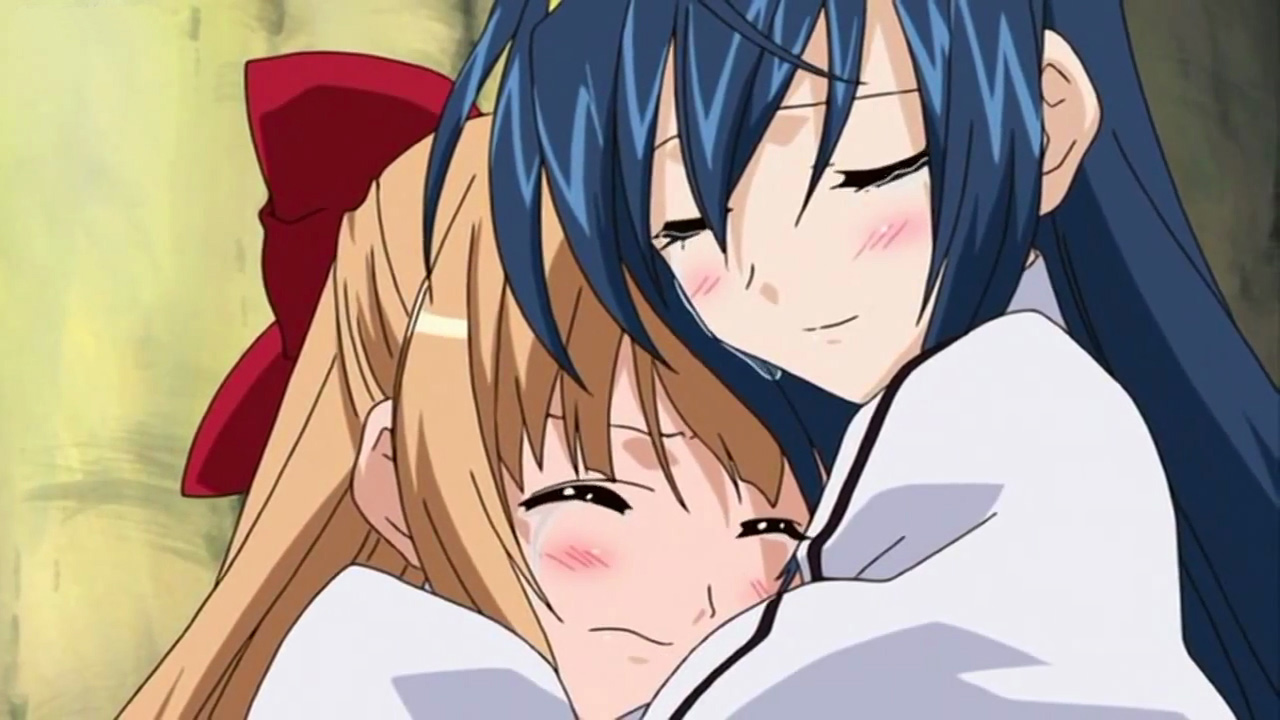 First, I’d like to name the most memorable scene of my very first Yuri Anime, Kannazuki no Miko. Sure, there were many memorable moments happening throughout the whole show, but no other scene was as tragically beautiful as this one. The mere fact that they finally realized their love for each other, yet couldn’t be together since Chikane sacrificed herself for her loved one… it’s so bittersweet and so damn good! Actually, I have to rewatch it right away. 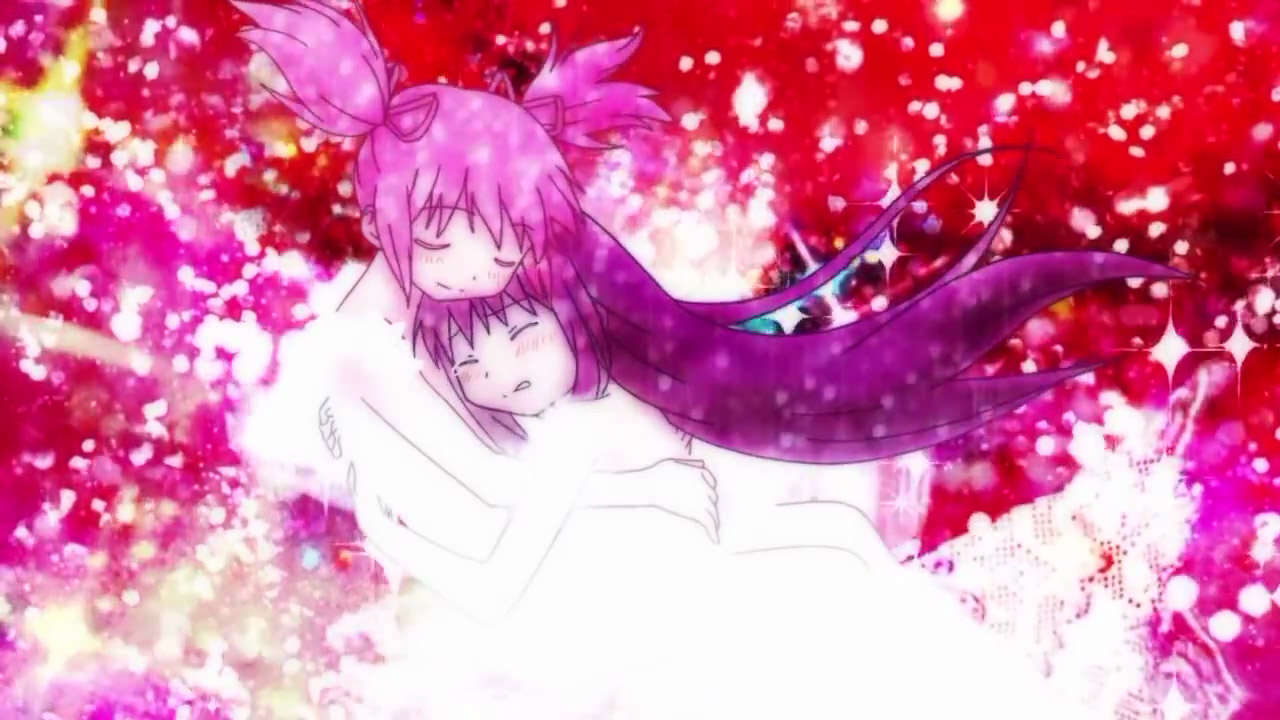 Next, we’ll have the /last/ moment between Homura and Madoka. Last moments and saying farewell, these probably make for the best scenes in any kind of show, and this is definitely proof of it. Just like in Kannazuki no Miko, Homura and Madoka as well had to part, knowing that they might never meet again. Only this time, no one had to die, but rather be reborn as something new again. Their naked hug in space was both symbolic and artistic, yet bittersweet and very tragic, seeing Madoka pass on her ribbon as proof of their eternal connection and /love/. Yes, I will probably never forget about this scene, ever. 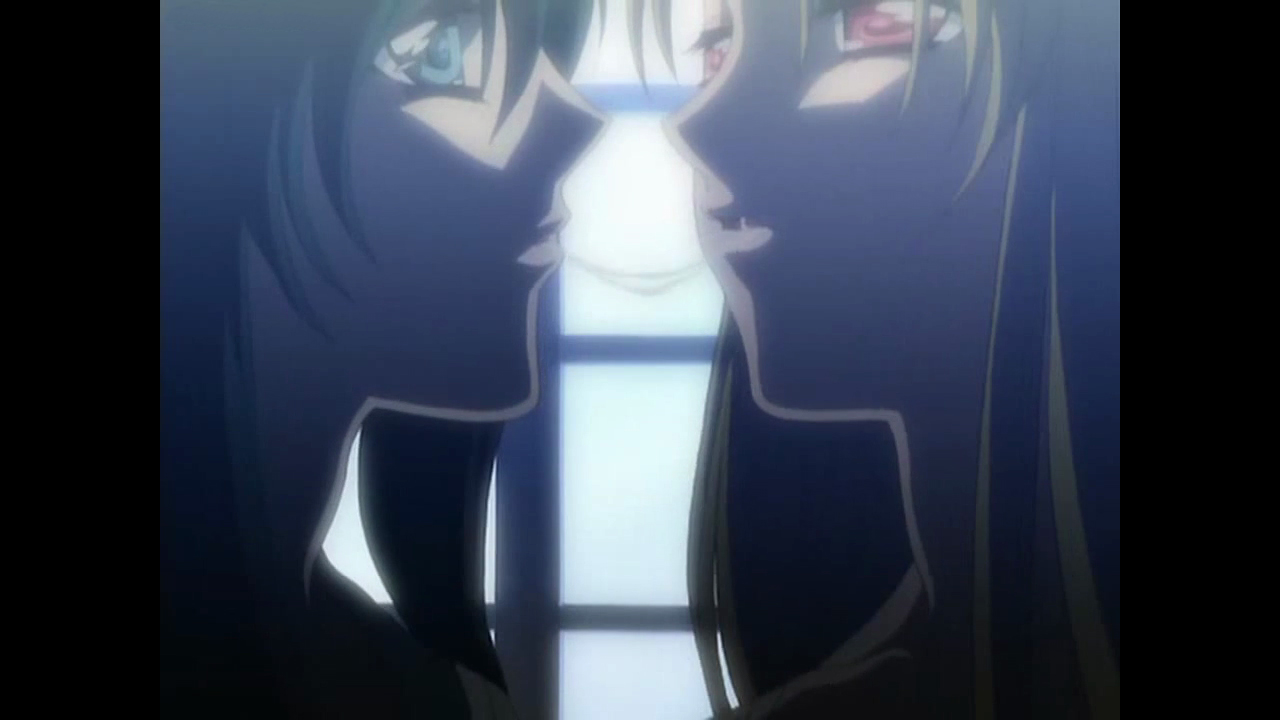 Well, I guess I said that memorable moments needed to be good scenes, or in other words, scenes that you can’t forget because you liked them so much.

However, in this case, I’d like to present to you the one anime scene that left me so unsatisfied and weirded out that it earned a special place in my heart for all the wrong reasons. It’s not only that their final kiss was all but in Hatsuki’s dream, it also ended with a thick string of saliva hanging between their mouths. For some reason, that was really off-putting back then, and knowing how it all ended, this scene makes the whole ending of the series even worse. 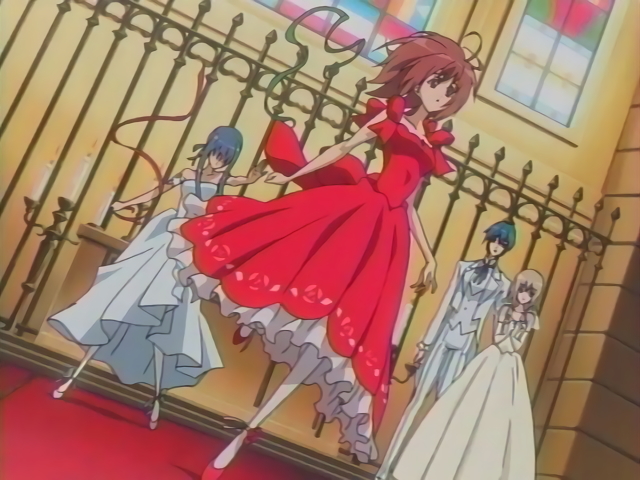 The first thing that comes to my mind when thinking about this scene is Shizuma’s heel hitting the floor of the church in a very dramatic way, followed by her desperate voice calling out for her beloved Nagisa. And then the love confession followed. Oh god, just thinking about it, makes me get totally excited. It’s really one of the most beautiful endings of all yuri anime. Though, I’m really sorry for poor Tamao, but I’m sure she can find someone as well! She would be a good match for Chikaru~ 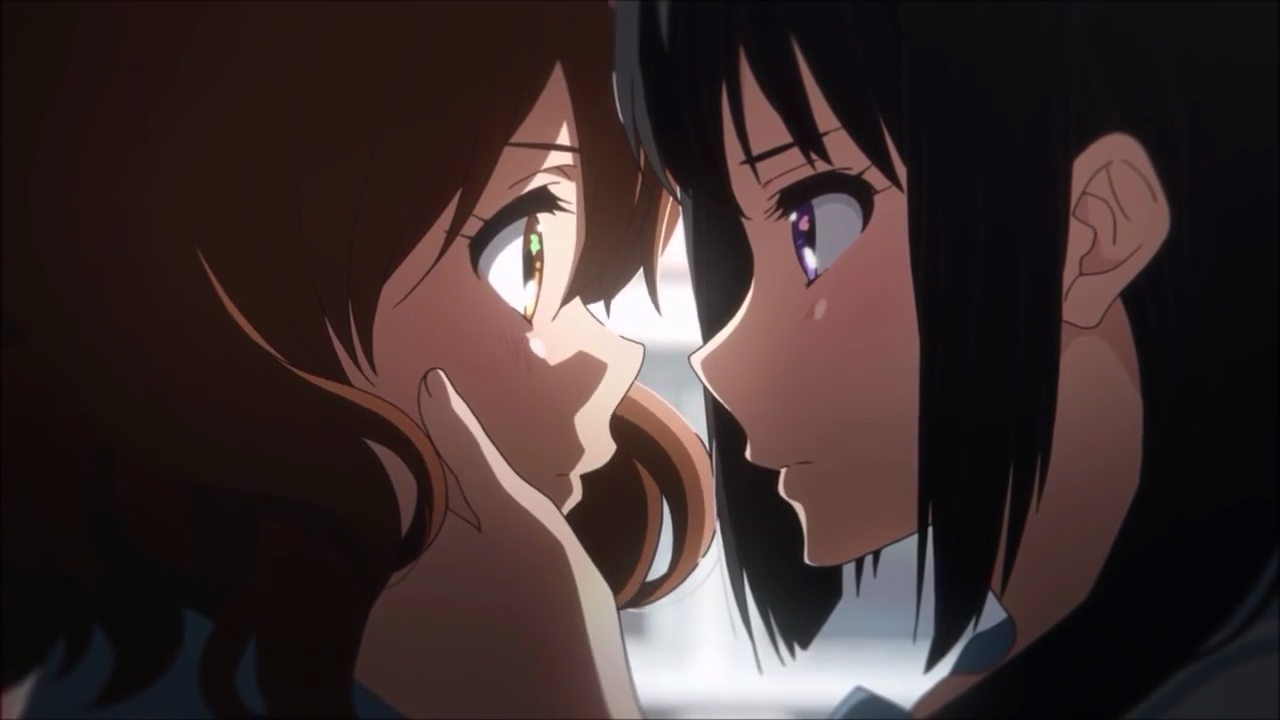 Speaking of love confessions, how about we talk about a certain “confession of love” between two very talented brass players? I’m pretty sure we were all very surprised when we first heard Reina use exactly this kind of wording to express her feelings for Kumiko on their way up the mountain during the festival. Though, the real magic happened at another time in the anime, precisely before Reina had to face Kaori in their little competition to decide which one would get to play the solo part during the nationals. It’s exactly this scene in which Kumiko did not only get back to their love confession, but they also shared one of the most personal and endearing moments I’ve seen in a long while. It seriously took me a moment to understand what was going on, but as soon as I silently started cheering for them to just take the opportunity and kiss, the scene was unfortunately already over. Good thing there will be a second season soon~ 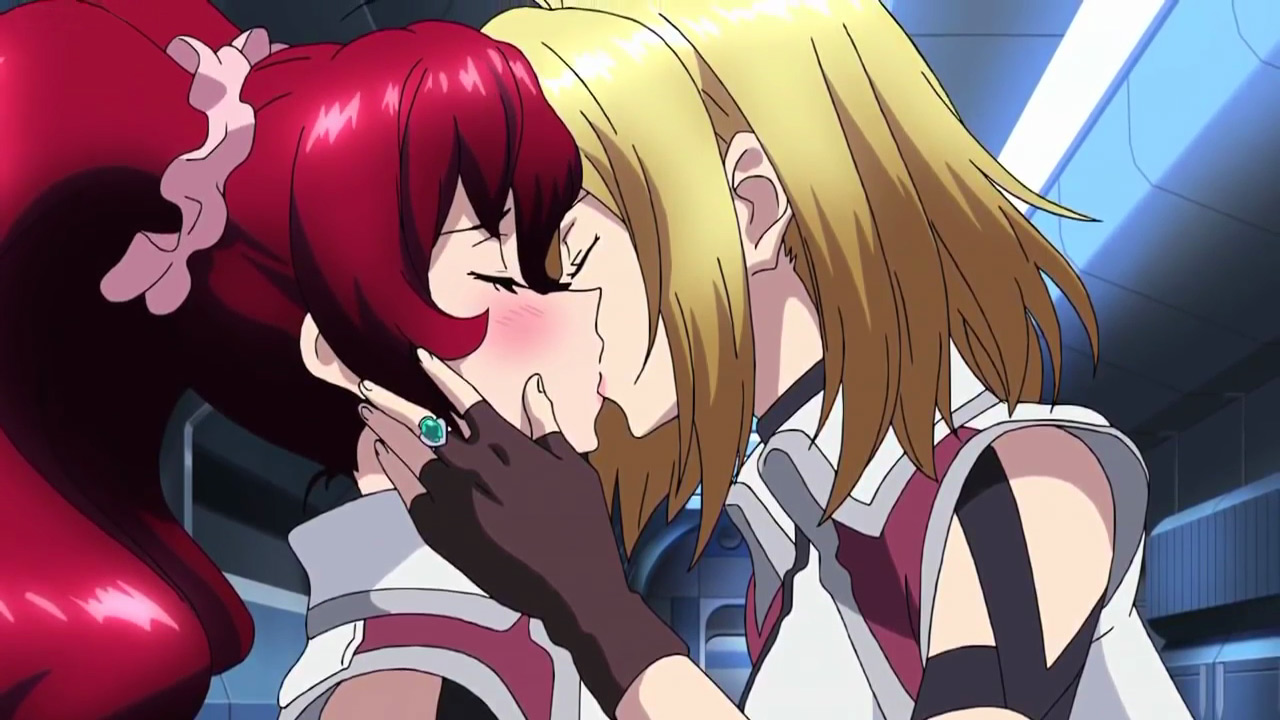 Well, there were many yuri kisses this show had to offer, and despite the fact that the yuri content was so high and we even got a canon pairing, I just can’t help but feel way more deeply about Ange x Hilda. Their relationship started off a little bumpy, but they learned that deep down they were pretty similar and even shared a similarly heart-shattering past. I guess this little connection was needed to strengthen their bond even more, but that’s not really what I wanted to talk about. So now, coming back to the actual scene that I like so much, I can only say that it’s probably the cutest thing ever to see Hilda getting all shy and insecure around Ange. And to make things even better, the scene ends with a kiss and a confession of at least something similar to love. I can work with that. 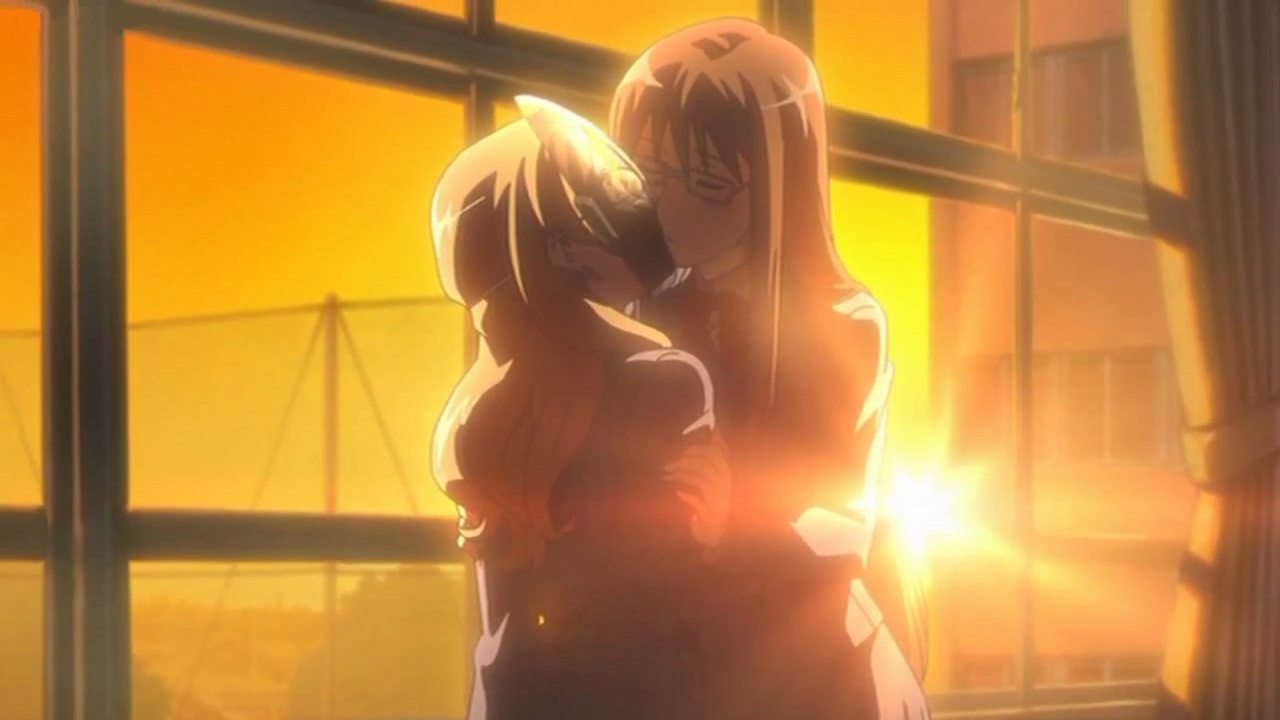 What do you think of when thinking about Sasameki Koto? I’m not talking about the manga, only about the anime, and to be honest, I don’t remember that much. I guess it’s a combination of all of the time that has already passed since it’s aired and the fact that the anime ended in a way that probably left many of us unsatisfied. Though, coming back to my initial question. The one thing that I actually do remember is the one scene in which Sumika let’s Kazama practice kissing, using herself as the object to practice with. Well, she was in fact wearing a mask while doing so, but I still feel like this scene had a great impact on the viewers, and I can’t help the fact that it is this one scene that I still remember so vividly. 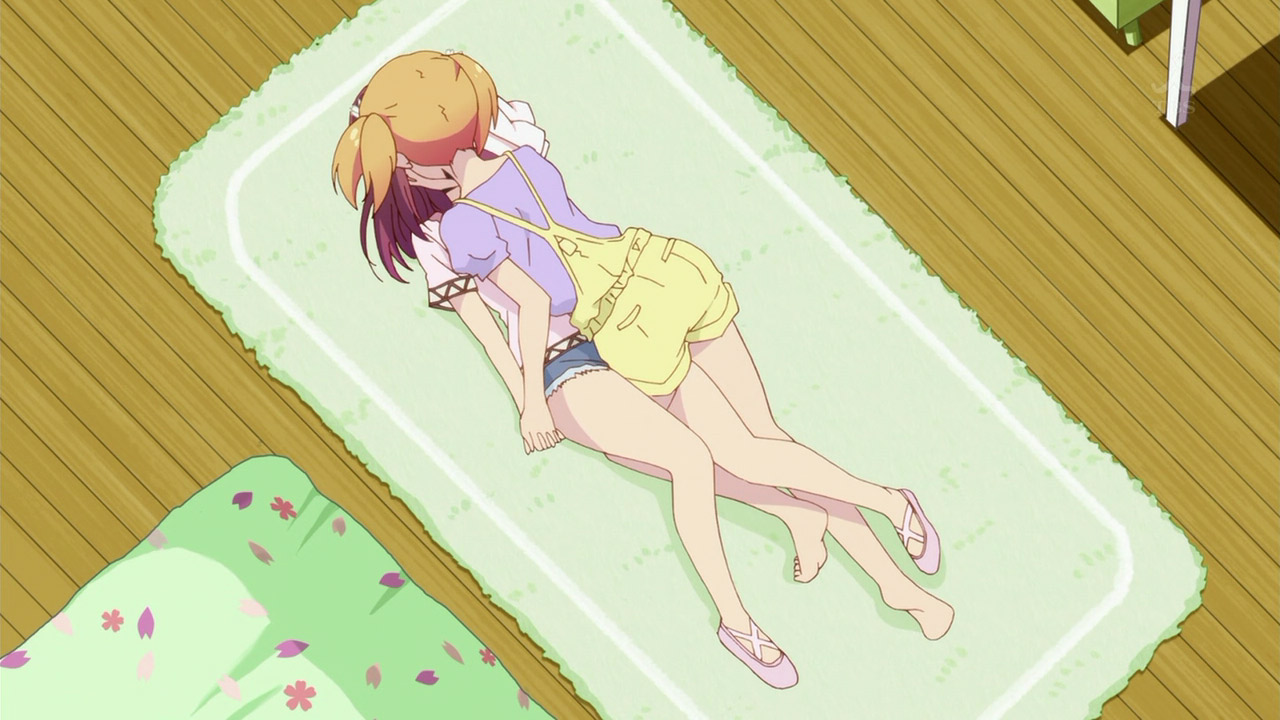 Well, undoubtedly this specific show has such an high amount of yuri scenes to offer that it’s almost impossible to choose between all of them. However, after admittedly having watched many of the numerous “Sakura Trick – kiss collections” floating around YouTube, there is one scene that sticks out for me. It’s that one scene in which they start getting into a little fight over the most trivial thing, but end up lying on the floor together, changing the mood completely in just a matter of seconds. The best thing about it though is the fact that it’s Yuu initiating the kiss, telling Haruka how thankful she is for having such a great girlfriend. Awww. This was so lovely, I guess I’ll have to get my fix of Sakura Trick kisses again soon. 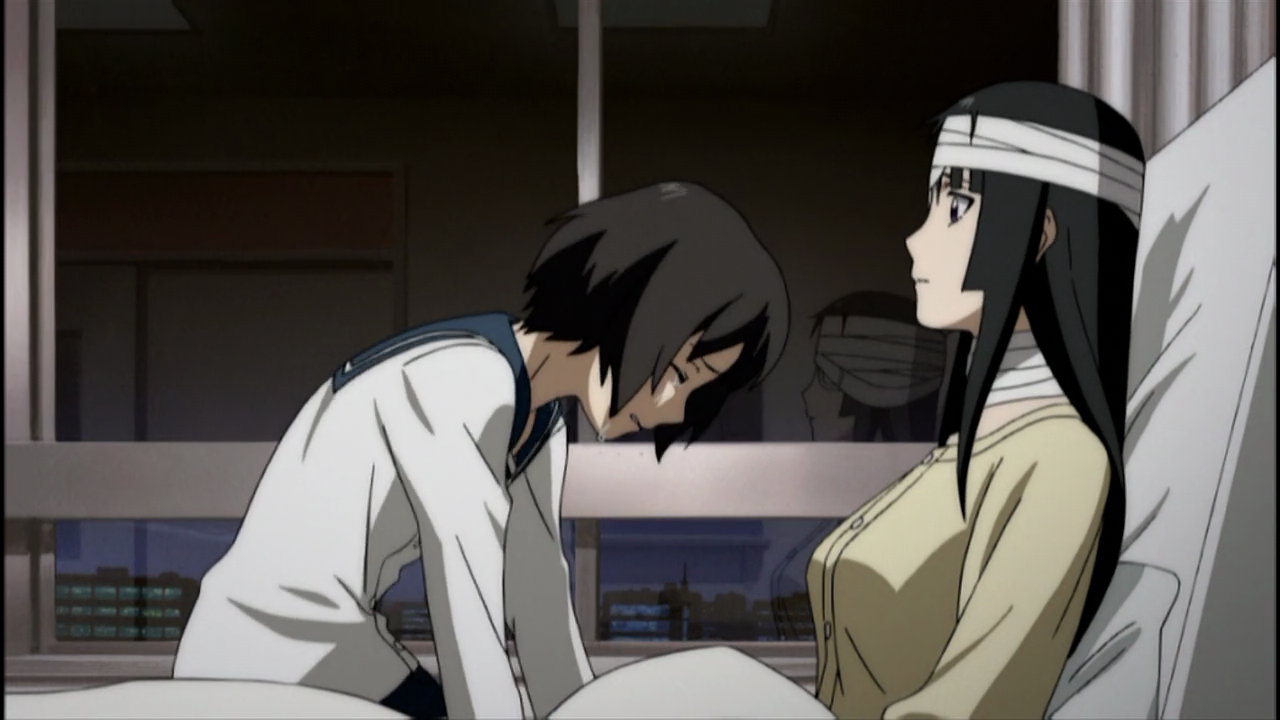 Next up is the yuri scene that wasn’t. Everyone remembers the scene in Ga-Rei: Zero where Yomi and Kagura play the Pocky game, but the scene later on in the show when Yomi’s injuries prevent her from playing it with Kagura is just the most heartbreaking thing ever. Even despite her situation, seeing how happy Yomi is to have Kagura there taking care of her really goes to show how close they had become and how tragic that part of the story is. Then there’s the ending where the famous phrase “Will you kill someone you love, because of love?” finally hits home. For how brutal some of the violence in Ga-Rei: Zero is, the most brutal thing turned out to be the Shakespearean tragedy known as Yomi x Kagura. 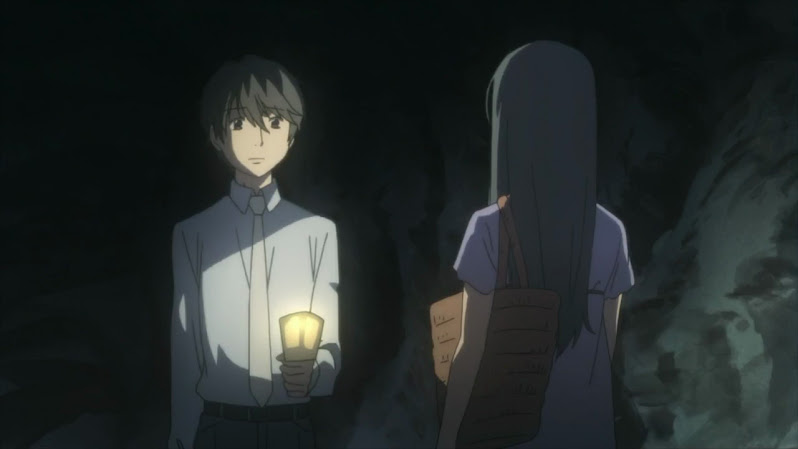 There aren’t a lot of anime that realistically depict romantic relationships, but Aoi Hana is definitely one of them. Anyone who’s ever been in love can probably relate in some way to the situations presented, which is why I still hold this show close to my heart. The most memorable scene for me was when Fumi finally put Yasuko in her place and closed the door on their relationship for good. Not only was Yasuko standing in the way of Fumi x Akira happening—that should be a crime in and of itself—she was also secretly in love with Mr. Kagami, so seeing Fumi stand up for herself and refuse to continue being Yasuko’s plaything is easily one of the most gratifying moments I’ve ever experienced in yuri anime. It almost makes me forget about the lack of any romance between the main characters… almost. 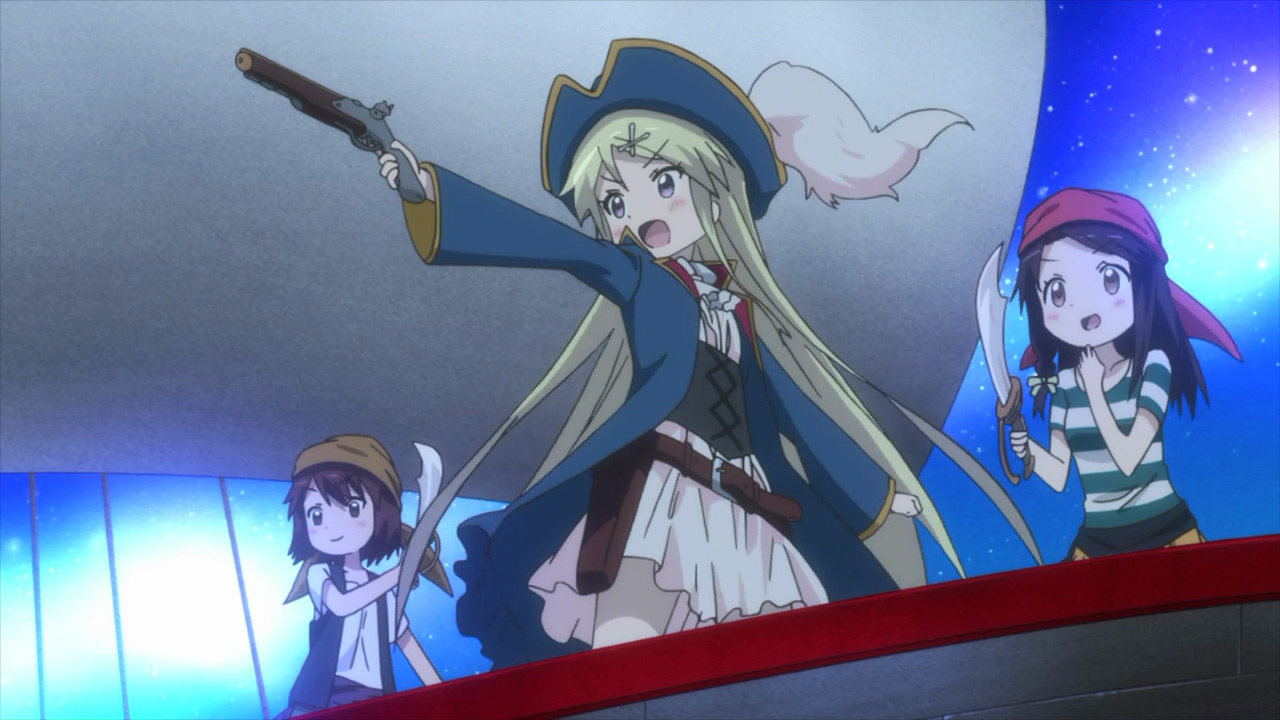 There have been plenty of moments so far that were either sad or romantic, but this next moment was just unexpected and great. Who would have ever guessed that during an episode of Kiniro Mosaic a Disney movie would break out? That’s exactly what happened in the final episode, as an assortment of Disney-esque princesses, heroes, and villains battled it out via song and dance. Okay, “dance” is probably stretching it a bit, but it doesn’t change the fact that this came out of nowhere and was just plain awesome. A yuri-fied Disney movie? Sign me up, please. And has there ever been a pirate as great as Karen Kujou? Nope! Never. 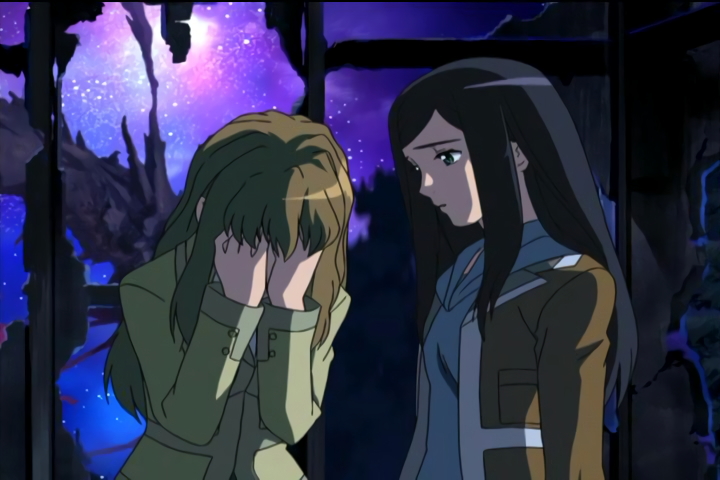 Last, but not least, let’s also talk about one of the first yuri shows I have ever watched, Mai-HiME. In this case, we could choose between scenes like Natsuki and Shizuru kissing, Shizuru telling Natsuki about her true feelings, or the many scenes in which Shizuru risks her life to save Natsuki. However, there is one scene that had an even greater impact on me than all of the scenes I listed above combined. The scene I’m talking about is right when Natsuki finally gains control over her “child” again and heads off to fight against Shizuru. Right before she summons Duran again after such a long time of not being able to get any fighting done, she quickly explains to us that the power of a “child” all depends on the love they have for their most precious person. Right at that moment, Duran appears, at least 3 times his normal size. Well, Shizuru mistakes this obvious hint of love with hate, but we all know what Natsuki actually meant to explain to Shizuru.

After having named our most memorable yuri moments of all time, it’s now time for you to add more. So what are the yuri scenes that still make you squeal in excitement or have an emotional breakdown by just thinking about it?