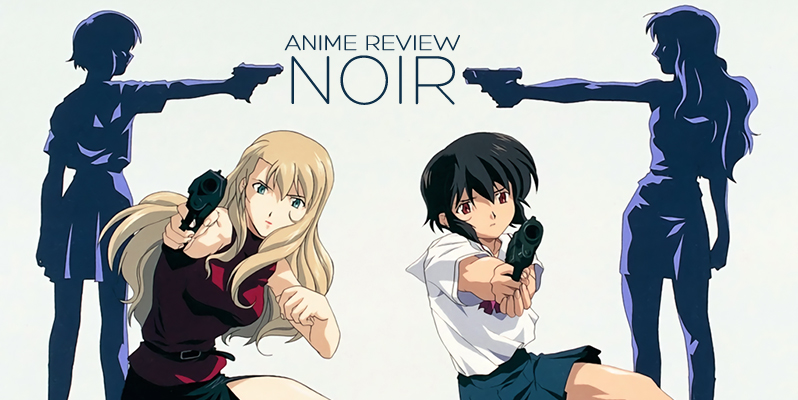 Noir was the first installment in Bee Train’s holy trinity of (yuri-ish) girls with guns anime, and is the second of the trio to be reviewed here on YR, following in the footsteps of El Cazador de le Bruja. While its spiritual successors may have been pretty good, Noir is the one that set the bar for what to expect from this type of anime.

In the heart of Paris, a contract killer with a tragic past is led to an amnesiac Japanese teenager with a Liam Neeson-esque very particular set of skills. Seeing as how their pasts are somehow connected and eager to get some answers, the two team up as a murder-for-hire duo known as Noir, setting into motion events that all point to a millennium-old legend that involves a secret society that operates from the shadows.

The basic premise of Noir is one that’s pretty intriguing and ripe for all sorts of drama. Even though things slow down for a while after the first episode, little by little, matters escalate, and the girls’ predicament becomes much darker and more dangerous. Compared to El Cazador, there isn’t as much comedy, and the tone remains rather serious throughout. I wouldn’t automatically say that’s a negative, as the greater emphasis on a serious story does pay off and helps to create an atmosphere that makes what’s going on more believable and impactful. That said, those who enjoy a little more diversity will probably be disappointed. This is an anime that’s very focused on gunplay and oftentimes resembles a John Woo flick. Missions the girls are sent on—they’re usually given missions via email by mysterious sources—span the globe, and seemingly always end with some bigshot criminal getting 86’d, which can grow a tiny bit repetitive. Things get far more interesting when an Illuminati-like secret organization starts to rear its head and begins pulling Mireille and Kirika’s strings. This expedites the drama and causes the girls to confront their pasts, which also greatly adds to the character progression and sense of emotional involvement. The cat and mouse game involving the girls and the Soldats (that’s the organization’s name) really makes the story engrossing and ultimately leads to the emotional resonance that puts this anime a notch above many other girls with guns anime, in my opinion. This subgenre isn’t renowned for the quality of its stories, but Noir does a better job than most, while still delivering some quality action.

Now let’s talk about the characters a little bit. It sounds strange calling a cold-blooded killer cute, but that’s exactly what Kirika is. Despite being a walking death machine, she’s exudes a sweetness and innocence that makes it really easy to like her. She starts out a very cold person (no doubt, a product of her youth), but slowly, she starts to become more humanized, and over the course of the series, she ends up growing a little bit. This reflects in her relationship with Mireille, which at various times ranges from scorn to fondness and everything in between. But Kirika’s only one piece of the puzzle. One might consider Kirika’s personality to be somewhat stale, but I don’t think the same can be said about Mireille. As the elder of the two girls, Mireille exudes a smooth confidence, that when combined with her brains and beauty, makes her a very sexy character. However, underneath the attractive exterior of this skilled assassin lies a young woman who’s haunted by events from her past. Both girls are more than just heartless killers, and having them journey together in order to find out about their respective pasts proves an effective tactic to developing some sort of attachment to them. For comparison’s sake, I think there’s a bit more substance to these, compared to Nadie and Ellis from El Cazador.

Elsewhere, there’s a revolving door of antagonists—some more interesting than others—that enter the fold and make life difficult for the girls. Chloe, Altena, Silvana, and Shaoli are just a few of them, with Chloe and Altena playing major, major roles in the story. It’s kind of cool that in an anime with a lot of male mob-types, the ladies turn out to be the most deadly adversaries. Special recognition should also goe out to the main “bad guy” in this anime. Without saying too much, unnerving is a great way to describe that person and their tendencies. They’re just creepy. Other than Kirika and Mireille, the number of truly memorable characters is somewhat small, but based on the strength of the main duo and a handful of others, the cast still manages to be pretty good. 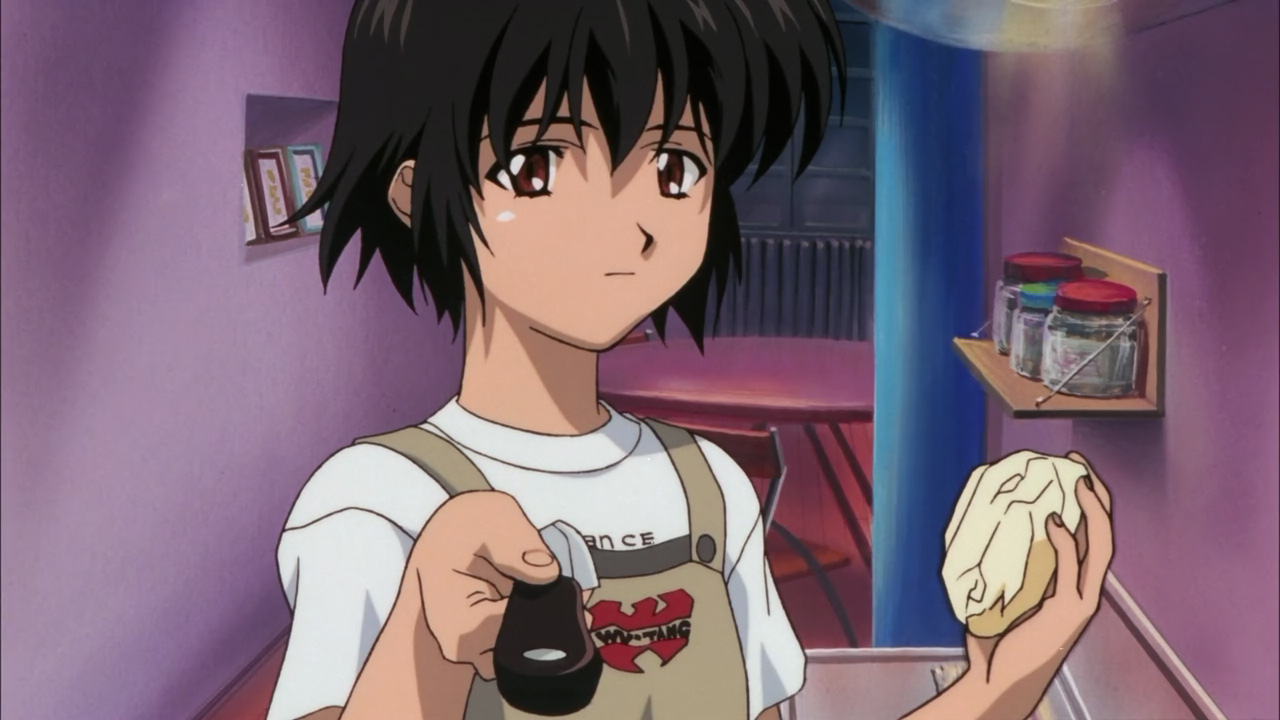 While the story and characters may be up to task, the same can’t really be said of the visuals. 2001 is when this originally aired, and doesn’t that seem like an eternity ago? For the most part, the backgrounds are sufficiently detailed, but the inconsistency regarding the other elements was my biggest issue with the animation. At times, perfectly fine, and at other times rushed and unflattering, the variation in quality is a bit of a black eye for the series. One specific scene was recycled and repeated many, many times over, which didn’t help matters at all. One other thing that especially irked me was the lack of blood in an anime where so many people die. There are probably dozens of casualties, yet we only see blood on a few occasions. I know it was done for censoring purposes, but it’s still strange to not see it. Nevertheless, the visuals are a mixed bag that has its share of good and bad.

As lacking as the animation was, thankfully, the sound is the complete opposite. Much like how she did for fellow shows El Cazador de la Bruja and Madlax, Yuki Kajiura is responsible for the music, and she once again hit it out of the park. The original soundtrack checks all the boxes and delivers all the things you’d expect from a Kajiura-composed anime. I haven’t even mentioned the great OP and ED, but you probably get the idea by now. In an anime that has plenty going for it, I think the audio is up there at the top of the list.

Despite what the above art makes it seem like, most of the yuri in Noir is just inferred. But that’s not to say that there’s nothing good going on, however. Over time, you see Mireille and Kirika become more attached, with their relationship shifting from a strict working relationship to friendship, and even though it’s not explicitly stated or shown, I think that there’s enough evidence to deduce that their involvement with one another could definitely be construed as more than just friendship. Something that does become more apparent is that Chloe is not going to confuse anyone as to her interest in females. Much moreso than Kirika or Mireille, she’s a bit more open with that. Without saying too much, there are 2 kisses in the series, and I won’t mention who they involve, but they’re there. While more obvious yuri is always welcome, the implied nature of the two main girls’ relationship gives people all the ammunition needed to ship them to their hearts desire, so go ahead and ship away.

The girls with guns subgenre has seen its fair share of strong entries (like Canaan) and duds (like the recent Hidan no Aria AA), but Noir is far closer to the former than the latter. Sure, the animation budget was tiny, but the compelling story, engaging characters, top-notch music, and subtle—yet effective—yuri more than make up for that drawback. Even though it’s not perfect by any stretch of the imagination, Noir still stands as one of the premier anime for people who prefer their yuri a little more mysterious and murderous.