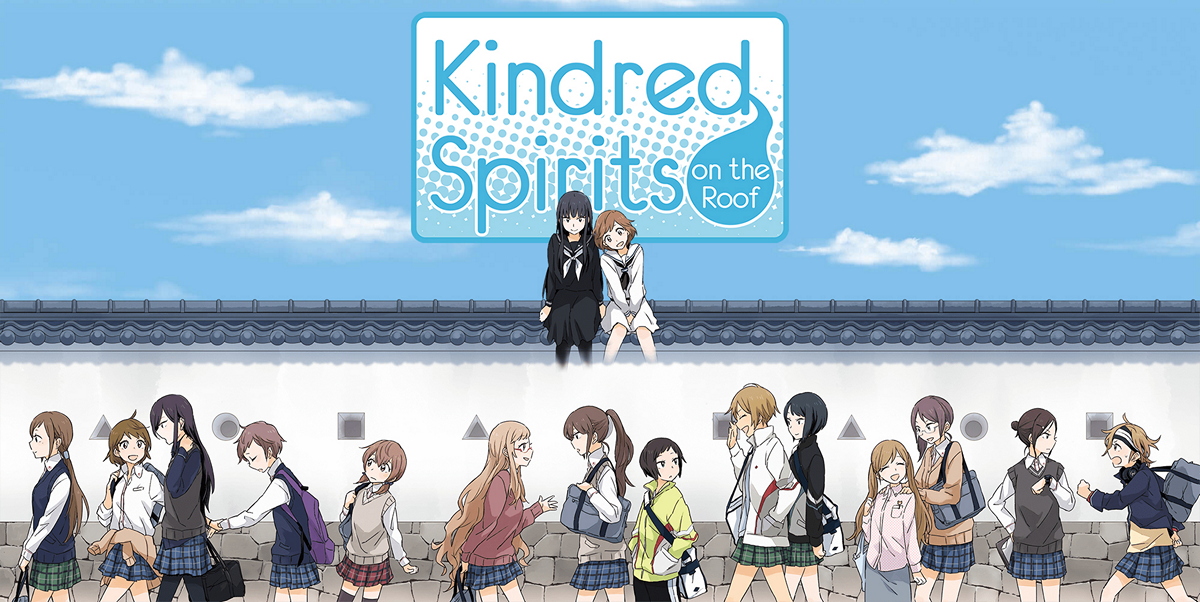 The Spoilers in this review are all written in white, so whenever you come across some red text saying “Mark text to see spoilers“, just do as the text says and mark the white area below to make the text visible.

Story: 9/10 and Characters: 10/10
One day, during lunch, Yuna Toomi, a rather antisocial and quiet girl, encounters two female ghosts on the roof. After getting over her initial shock, she finds out that these two are a couple and have been haunting the school for decades now, trying to find a way to leave this world without having any regrets. After a little persuasion, the two ghosts, or rather the kindred spirits, as they force Yuna to call them, succeed in getting Yuna to help them in their quest to built a “Yuritopia” in their school, meaning that they need her to assist young girls in love with other girls.

(from left to right) Yuna, Sachi, and Megumi

While Yuna—more or less willingly—plays the role of a yuri cupid, she encounters numerous girls that either secretly or openly share feelings of love for other girls in school. And even though she doesn’t really understand this kind of love between women at first, she soon realizes that her quest to yurify the school holds far more joy than she initially thought it would.

First of all, let’s make one thing clear, while this game doesn’t include any male characters and focuses on the numerous relationships between the female characters of this high school, it still doesn’t mean that every character is into girls, and it especially doesn’t mean that being lesbian is viewed as the most normal thing in the world. Don’t get me wrong, but as a lesbian myself, I rather enjoyed seeing each and every one of the girls have their own little struggle to accepting their feelings. And despite this game involving ghosts, I’d say that many, if not all, of the relationships we are able to follow had something quite realistic.

Mark text to see spoilers – Kiri’s realization, in particular, entertained me beyond belief, as she started arguing with herself over the possibility that she might actually be gay… while on the toilet.

Watching each and every couple slowly getting closer and taking their first steps together is seriously something that not only Yuna and the two kindred spirits found rewarding. I also found myself being unable to stop playing during certain parts, completely forgetting about the time, and eventually ending up missing quite a few hours of sleep. Well, I guess I can’t help it. This Visual Novel is just so well-written, so rich in variety, and simply so entertaining thanks to the many different characters that it’s no wonder you’d get addicted to it. There is always something new and interesting you come across, and even though you already know how this game will eventually end, how things played out still never ceased to surprise me. In short, the pacing is perfect. It just doesn’t feel rushed, nor does it seem like things are unnecessarily being dragged out for too long.

And if we now take into account that there are numerous pairings with many types of different characters, I’m pretty sure that everyone will find something they’ll enjoy. Even touchy subjects like a student-teacher relationship are involved, and trust me when I tell you that each and every of them is done in a splendid way, involving both cute and fun moments, as well as a certain amount of very well done drama.

If I had to name a favorite couple, I’d actually go with the student x teacher couple without a second thought. I’m usually not a fan of these themes, nor do I like age gap that much, but this couple is just so irresistible that it’s hard not to love them~

Gameplay: 8/10
I guess I can’t really say that much when it comes to the gameplay. Well, I haven’t played that many Visual Novels so far, so my knowledge is limited, however, I felt like the ideas they used in Kindred Spirits were quite nice. Especially how they arranged the single events in a calendar where you can choose which route you want to experience first. It’s also nice that we experience the story from a lot of different perspectives, though, this often leads to certain scenes being displayed twice, just so you can see it from another point of view. I guess this can be nice insight on some characters, but for me, I usually skipped what I had already read. The only scenario where I’d really see an option like this as something useful would probably be for sex scenes.

Throughout the game, you also come a cross a number of decisions you can make. It doesn’t affect the story in any way, other than altering the few lines that follow after the decision. Though, after finishing the game, there will be extra scenes that you can unlock depending on how you answered these questions, which I found really nice~

Other than that, I can only say that I ran across some minor problems with the game, since it sometimes just froze up. Well, closing and starting the game anew usually solved the problem, but since it happened quite a few times, it bothered me a little.

Music/Sound: 9/10
The background music for Kindred Spirits really is nice, intensifying the mood of each and every different scene perfectly. I guess I’m also happy with both the opening and the ending themes, even though I can’t really say that I like them enough to actually buy the songs.

The voices, however, are something far more important in my opinion. They either make the characters more enjoyable to follow around or absolutely unbearable to listen to. Well, in the case of Kindred Spirits, they certainly did a great job. All the girls have just the kind of voice to make it exciting to follow their stories. I’m actually pretty sure that some of the girls were even voiced by the same voice actresses as some of the SonoHana characters, like Seina and Matsuri being voiced by the same girl as Eris, which was pretty exciting for me~

Art: 9/10
I guess the words that first come to mind when trying to describe this certain art style are gentle, cute, and warm. It’s fitting for the whole feel of this Visual Novel, and it sets the mood just right. The characters also look absolutely cute, with their many adorable expressions. The only negative thing to say here is probably the fact that for a Visual Novel of this length, there were probably too few event CGs. That’s especially bothersome if we take into account that the characters were usually only voiced during times the event CGs were displayed.

H-Scenes: 10/10
Mark text to see spoilers – Don’t be fooled. Despite the fact that this game looks extremely cute and innocent, there are quite a few sex scenes involved as well. In fact, each and every couple gets one of them, while some are a little steamier than others.

Well, first of all, I loved them with all of my heart. It’s just so different from anything I’ve played so far. And with different, I mean that it’s tamer, sweeter, and it actually really feels like a scene like this could play out just like that. These scenes mostly display the couples’ first time, which is why I absolutely love that they take a slower and even unsure approach to the whole thing. Hell, some of these “sex scenes” only involve the girls touching each other above the waist, which just makes you realize that this game doesn’t focus on the sex. It’s just something that accompanies the girls’ relationship, a natural step, you could even say, and that’s exactly what’s so nice about it.

I know giving this a 10/10 might be unreasonable for some of you, but I just can’t help but love how amazingly beautiful and tender these scenes played out, and especially how fitting they were voiced. You really can’t even compare this to Sono Hanabira. It’s just so different.

Total Enjoyment: 10/10
What can I say? Ever since this game was released, I’ve been pretty much addicted. The game started out without any boring intro and got right to the point, keeping me interested in the most crucial time of the game – the beginning.

From this point on, it just added the right amount of drama and fluff, and even sex to just make this the perfect experience. Furthermore, I just couldn’t stop myself from falling in love with each and every one of the displayed characters, loving some couples to a quite unhealthy degree even.

Well, I guess I’d still be more happy with Yuna x Ano instead of Yuna x Hina, but I can at least say that after their final sex scene, I’ve gained a new kind of understanding and acceptance of their relationship. So even this minor flaw is something that I can simply overlook.

So all in all, should you buy this game? HELL YEAH! What are you still waiting for?!

58 thoughts on “Visual Novel Review: Kindred Spirits on the Roof”